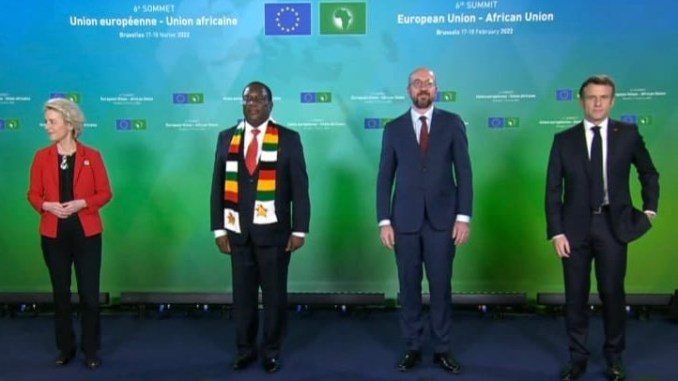 Despite his trip to Brussels which follows last November’s horror Glasgow Climate Summit, it is apparent that Mnangagwa’s re-engagement drive has ground to a halt.

With the EU having all but lifted much of the sanctions on the country this week, Britain and the United States still maintain symbolic sanctions on Zimbabwe.

Mnangagwa travelled to Brussels on the promise that he would revive the re-engagement process which has since 2019 gone off rails. The EU maintains that the 79-year-old leader has failed to improve the human rights situation.

Since the death of former Foreign Affairs minister Sibusiso Moyo last January, his successor Frederick Shava has failed to spearhead the re-engagement drive.

In Brussels, Mnangagwa only managed to meet representatives of the Antwerp Diamond Council, a grouping of diamond companies in Belgium, as the country readies to take over the presidency of the Kimberley Process Certification Scheme in April this year.

Mnangagwa also met the vice-president of Siemens, a German communications and medical technology company, hoping to ink a deal for a state-of-the-art health centre in Victoria Falls.

On his way to Brussels, the 79-year-old leader met Ethiopian leader Abiy Ahmed Ali, who has been under immense international pressure to end conflict in Tigray where thousands have died, throwing the region into a humanitarian crisis.

While Mnangagwa received a cold shoulder, his Zambian counterpart Hakainde Hichilema made major strides in his engagement with the EU.

Hichilema was the busier of the two, enjoying attention from top EU officials who included Josep Burell Rontelles, the bloc’s high representative for foreign affairs and security.

Hichilema’s meeting with the International Monetary Fund (IMF) raised hopes that his country would get fresh funding for infrastructural projects while he also met France’s Macron.

Top officials also say that the EU’s plan to send a team to Zimbabwe had all but failed due to the Ukrainian conflict, frustrating Mnangagwa’s only hope of improving relations with the bloc.

Zimbabwe has since 2000 been reeling from international isolation, with the country’s leaders failing to make a breakthrough.

“As at COP26, Mnangagwa was received politely but never at great length. It is felt that Zimbabwe has no stable investment climate to offer Europe. At the same time, it was felt that Mnangagwa offers no threat to European interests. There was no incentive to meet long with him and there were two other factors: Other African leaders were seen as more important and were given priority,” Chan said.

“Dwelling too long with Mnangagwa is still seen as bad public relations.  No charm offensive can replace a deliberate and visible reform of the Zimbabwean political and especially electoral climate.

Prior to Brussels, Mnangagwa had another disastrous trip to Glasgow in November last year where he failed to meaningfully engage world leaders on climate matters, instead reducing the all-important summit to optics and grandstanding on re-engagement with the West.

At the summit, South Africa secured a US$8.5 billion deal from the United Kingdom, United States and the European Union to curb high carbon emissions and develop new renewable energy projects.

Mnangagwa arrived back home yesterday to pomp and fanfare, as thousands of bused supporters celebrated a “successful” re-engagement drive. While the world was seized with pressing climate change issues, which include funding mechanisms for migration from coal to more sustainable energy, Mnangagwa was looking to mend relations with the West.

Mnangagwa’s re-engagement drive has gone off the rails over the past three years, despite gobbling up millions of taxpayer dollars on public relations firms which have tried in vain to spruce up the country’s battered image.

The UK had remained Zimbabwe’s major cheerleader until January 2019 when Mnangagwa’s regime went on a rampage, killing 17 citizens, bruitalising dozens while many were displaced during widespread riots over rising fuel prices.

The goodwill evaporated when the then minister for Africa, Harriet Baldwin, declared that the UK would no longer support Zimbabwe’s bid to rejoin the Commonwealth and the country’s attempt to woo back foreign funders.

She expressed dissatisfaction with Mnangagwa’s failure to implement badly needed political and economic reforms. In the aftermath of a bloody military crackdown, the President said any soldier found to have committed crimes would be brought to book.

Baldwin had earlier promised to support Harare’s return to the Commonwealth. Mugabe withdrew Zimbabwe from the club of mostly former British colonies in 2003 after the bloc condemned the callous killings of white farmers at the height of land reforms and presidential polls marred by violence.

Since then, Britain has slapped Zimbabwe with sanctions, with the latest being February last year. Since the coup that toppled long-time ruler Robert Mugabe, behind the scenes the UK had been campaigning for Zimbabwe’s debt clearance plan and mediating with international financial institutions to support a bailout for Harare.