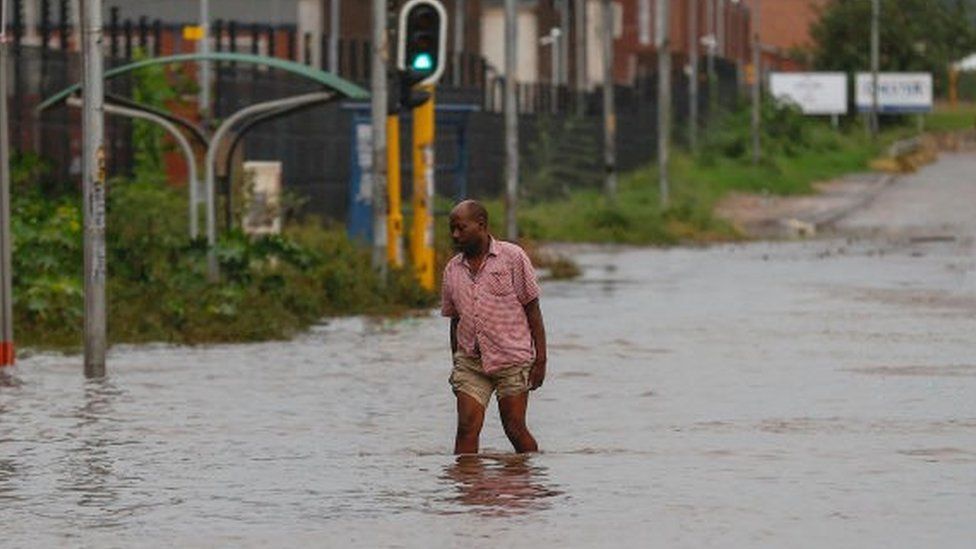 The death toll in the South African province of KwaZulu-Natal has reached more than 250, after devastating floods wreaked havoc in the area.

Local authorities are calling for a state of disaster to be declared, after some areas saw months worth of rain fall in one day.

Officials have called it “one of the worst weather storms in the history of our country”.

Mudslides have trapped people under buildings, with more floods expected.

There are reports that the rescue effort is being hampered by poor visibility as a helicopter continues to bring people back to safety.

On Tuesday the BBC witnessed one such search operation for a 10-year-old girl who was part of a family of four swept away on a flooded bridge.

Community volunteers waded into the muddy river, taking turns to hack away at the branches using machetes and removed debris and rubbish that had washed downstream.

Parts of the crucial N3 highway which connects Durban to the economic heartland of Gauteng province have been blocked.

President Cyril Ramaphosa has visited the area and pledged to help.

“Even though your hearts are in pain, we’re here for you,” the Reuters news agency quotes him as saying.

He also described the disaster as a force of nature, which some have disagreed with. They blame poor drainage and badly built houses in low-lying areas for the high death toll.

Mxolisi Kaunda, mayor of the area’s biggest city Durban, has denied that poor drainage is to blame, saying the scale of the flood was unexpected.

Scenes of destruction are still evident throughout the area. Some of the roads to the port of Durban are impassable after the swollen river washed mud and debris onto the roads. Operations at the port have now been suspended.

In an industrial area called the Bluff, which forms part of the port, the BBC witnessed cars overturned on the road, or crushed by debris. Companies are using water pumps to drain the water from their premises.

Ron Naidoo, a community pastor in the town of Tongaat, told the BBC he had been kept awake through the night by the rising floodwaters and had seen police drag a car out of the river with a body inside.

“It was traumatic because it is the first time that we have seen the river rise so high here,” he continued.

The KwaZulu-Natal provincial government estimates that billions of rand worth of damage has been caused to properties and infrastructure, describing the heavy rains as unleashing “untold havoc” in a statement on Facebook.

Electricity and water treatment plants have been “flooded out”, the Durban mayor told the BBC.

Communications have also been disrupted with two major networks reporting that more than 900 of their cell phone towers are down.

Declaring the flood-stricken area a disaster zone will “enable the province to apply for emergency funding” from the National Treasury and assist with necessary reconstruction work, authorities say.

There are also reports of looting in Durban, which the local government has condemned: “We will not allow what is a tragic development in our province to be taken advantage of,” it said.

The government is calling on people to stay safe by avoiding flooded roads and bridges and to evacuate to higher ground if they live in low-lying areas.

The stormy weather comes as scientists warned that climate change is fuelling heavier rainfall than usual in southern Africa.

At the start of the year, the region was hit by three cyclones and two tropical storms in six weeks, which primarily affected Madagascar, Mozambique and Malawi and inflicted widescale damage with 230 reported deaths according to the World Weather Attribution (WWA).–BBC