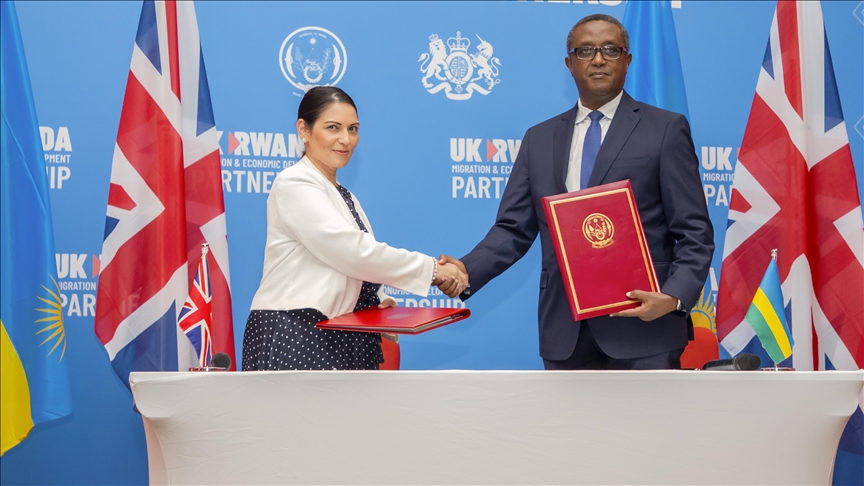 There are no good precedents for outsourcing asylum processes, and the agreement could damage continental relations.

Details of the agreement have yet to be revealed, but UK Prime Minister Boris Johnson says up to “tens of thousands” of asylum seekers will be escorted to Rwanda. Successful applicants will receive protection visas to spend at least five years in the east-central African country.

The five-year trial will include a £120 million (US$152m) investment in Rwanda’s economic development. The deal has been widely criticised as inhumane, expensive for the UK, unworkable and contrary to international law. Johnson’s claim that Rwanda is “one of the safest countries in the world” has also been challenged. As recently as 2021, the UK raised concerns about Rwanda’s failure to investigate human rights abuses.

European countries have been targeting Africa for border externalisation measures since migration pressures increased in 2015. These have included ‘hotspot’ camps, ‘disembarkation centres’ and returns and readmissions agreements. African countries and the African Union (AU) have been relatively unified in rejecting them. In 2021, the AU blasted reports of a similar deal with Denmark as “xenophobic and completely unacceptable.” Ghana has repeatedly countered rumours that it considered its own UK agreement.

Restrictive measures that hinder free movement are against Africa’s priorities and have negatively impacted countries on the continent. African leaders who cooperate with Europe to block migrants and asylum seekers could pay for doing so at the polls. But Rwanda president Paul Kagame is in his 22nd year at the helm and is unlikely to be concerned about election pressure. However, he must still consider diplomatic relations and the long-term impacts of this deal.

Rwanda’s acquiescence to the UK’s request is part of the African country’s decades-long campaign to be viewed as forward-thinking with sophisticated solutions to complex issues. Kagame claims that the UK approached Rwanda because of its strong refugee record and historical willingness to help. “We are not a rich country, we’re not a big country, but there are solutions. We can always help,” Kagame says.

He refers to the Emergency Transit Mechanism centre that Rwanda hosts in partnership with the UN Refugee Agency (UNHCR) and the AU, with funding from the European Union and member countries. The centre evacuates vulnerable would-be asylum seekers from dangerous situations in Libya.

It has received 900 people since it was established in 2019. Two-thirds of them have been resettled to third countries. This arrangement is fundamentally different and relies on cooperation and funding from UNHCR and third countries — elements not included in the UK-Rwanda deal.

Rwanda previously partnered on a secretive deal with Israel to accept African asylum seekers who agreed to ‘voluntary’ transfer. Details of the arrangement are scarce, and Rwanda has obfuscated and denied its existence. Between 2014 and 2017, thousands of African asylum seekers were promised travel documents, cash, and visas if they agreed to leave Israel for Rwanda. Israel eventually scrapped the deal.

Reports show that people were denied documentation, blocked from claiming asylum and coerced into leaving the country. Most are believed to be living irregularly throughout East Africa. Many have moved onward via Libya into Europe.

A minority of migrant arrivals to the UK are African. The most significant proportion is Iranian. It is unclear if the UK plans to send all nationalities to Rwanda, and if it transfers Africans only, that will raise a new set of ethical questions. A debate has already been ignited regarding how some countries have disproportionately welcomed Ukrainian refugees compared to other nationalities.

Another question is whether Rwanda can manage more refugees. It is the most densely populated country on the continent and already hosts almost 130,000 refugees. This intervention is chronically underfunded, and refugees have staged protests against food ration cuts that resulted in police violence. Transferring thousands of asylum seekers from the UK in this context is highly questionable.

There are no good precedents for outsourcing asylum processes. Rumours have circulated about “informal” deals shrouded in secrecy, but Australia is the only signatory to the 1951 Refugee Convention known to forcefully send asylum seekers offshore as official policy. The country has transferred 4,000 asylum seekers deemed “illegal maritime arrivals” to centres in Nauru and Papua New Guinea since 2012. Over 200 remain in offshore detention.

The system has cost at least A$1 billion (US$721m) annually since 2012 and has failed to achieve all its objectives, including stopping people smuggling. Restrictions do not stop people from fleeing war or persecution in search of a better future. Instead, they drive people towards irregular means.

The UK and Rwanda have wilfully blurred distinctions between migrants, asylum seekers and refugees. They have used language such as “illegal” and “unauthorised” to criminalise movement and make restrictions more palatable to the public. Seeking asylum is legal, whether people travel by boat or by foot. Their rights to enter a country are protected by international law, regardless of how they arrive or what documents they hold.

For the UK, the goal of the Rwanda deal is to deter future arrivals. This sets a concerning precedent and degrades an already beleaguered refugee system. Denmark is moving forward with a similar agreement.

Denmark and the UK were among the first 11 countries to sign the 1951 Refugee Convention, but both countries are now changing domestic laws to make sending asylum seekers offshore legal. If deemed legal, it opens the door for other states to do the same. Nothing stops Rwanda, for example, from outsourcing asylum seekers to other countries.

About the writer: Aimée-Noël Mbiyozo is a senior research consultant on migration at the Institute for Security Studies in Pretoria, South Africa. — Daily Maverick.

Related Topics:AsylumRefugeesRwandaUnited Kingdom
Up Next