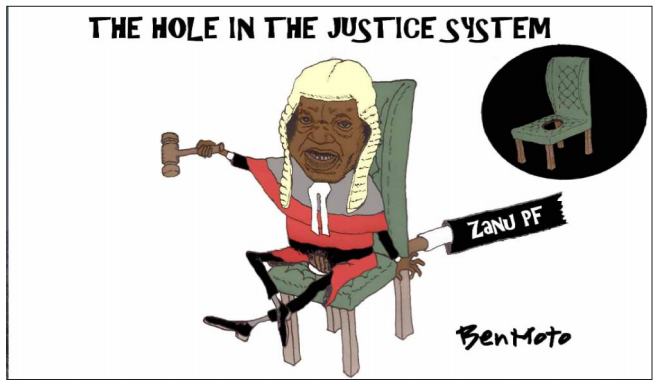 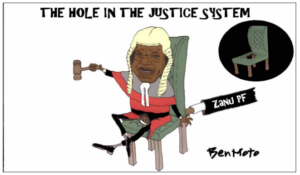 Not just that, without consequences. In other words, with impunity.

Well, Ncube can now stop scratching his head — that is if he was indeed confounded by the smuggling syndicates in the first place. He ought to have known better.

The endless heists on Treasury and national resources by his bosses and their cronies – the kleptocrats  in suits and
ties, as well as their advisers and enablers – are happening right under his nose.

The scandal has sparked national outrage and debate in farflung lands, including in the House of Lords in Britain.

The scandal provided evidence that the politically connected and those in the corridors of power, in this case exemplified by the accused accessory to the crime Steven Tserayi, a Central Intelligence Organisation security aide for President Emmerson Mnangagwa.

Rushwaya is a well-connected individual. She is related to those in power and operates within their social and political networks. Her background is very interesting and revealing.

Rushwaya is a teacher by training and profession, failed amateur Zanu PF politician, football administrator and ex-Zifa chief executive. She has been linked to a series of corruption cases relating to extortion, fraud, bribery, theft and match-fixing scandals.

Tserayi is a senior security aide, having worked with ministers and until now with the President. He is highly connected as he worked around Mnangagwa and other senior authorities.

His alleged involvement is not merely about corruption by an individual. It is as much about him as it is about the behaviour of people around the president, state security agents and brazen abuse of power and positions, a national security key point like the Harare International Airport (which those in power now call Robert Mugabe International Airport) and the security of the nation. This all in the context of corruption which has reached catastrophic levels in this country.

Government, while acknowledging gold worth US$100 million is smuggled out every month, has done precious little to stem the rot. The reason is simple: people in power and positions of authority are involved. So they won’t act willingly. Corruption is not only deep rooted in society, but has also become a national culture.

The whole Rushwaya scandal speaks volumes about how rotten society and the system have become. For starters, whoever conveniently switched off the CCTV during the attempted smuggling process must be arrested.

Secondly, the involvement of security operatives raises the
big question: Why is the President surrounded by this sort of people? Their audacity shows that what they did is the order of the day in their circles. It can be first, and probably the not last, time they are doing it. Their behaviour shows smuggling is their stock-in-trade. So the rot is around Mnangagwa.

Thirdly, prosecutors behaved in a strange manner when they initially indicated they were not opposed to the granting of bail. It beggars belief; raises selective application of the law.

Fourthly, it has not gone unnoticed that the usual gang of “super patriots” is dead silent as this smuggling scandal unfolds.

They are on mute button waiting to make noise on distractions and obfuscations like sanctions. The looting and smuggling of minerals is a serious matter that threatens the very survival of this nation.

We are not talking of petty pilferage: US$100 million per month totals US$1.2 billion per year. It’s like someone stealing the whole annual budget of Zimbabwe. Surely that’s almost treasonous; a betrayal of the whole nation.

Corrupt leaders in this country are doing far more irreparable and incomparable damage to the economy and people’s lives than sanctions. Phony patriotism of the Zanu PF corrupt leaders and their supporters variety is a refugee for scoundrels.

Now let’s hear what the patriotic scoundrels have got to say after this.