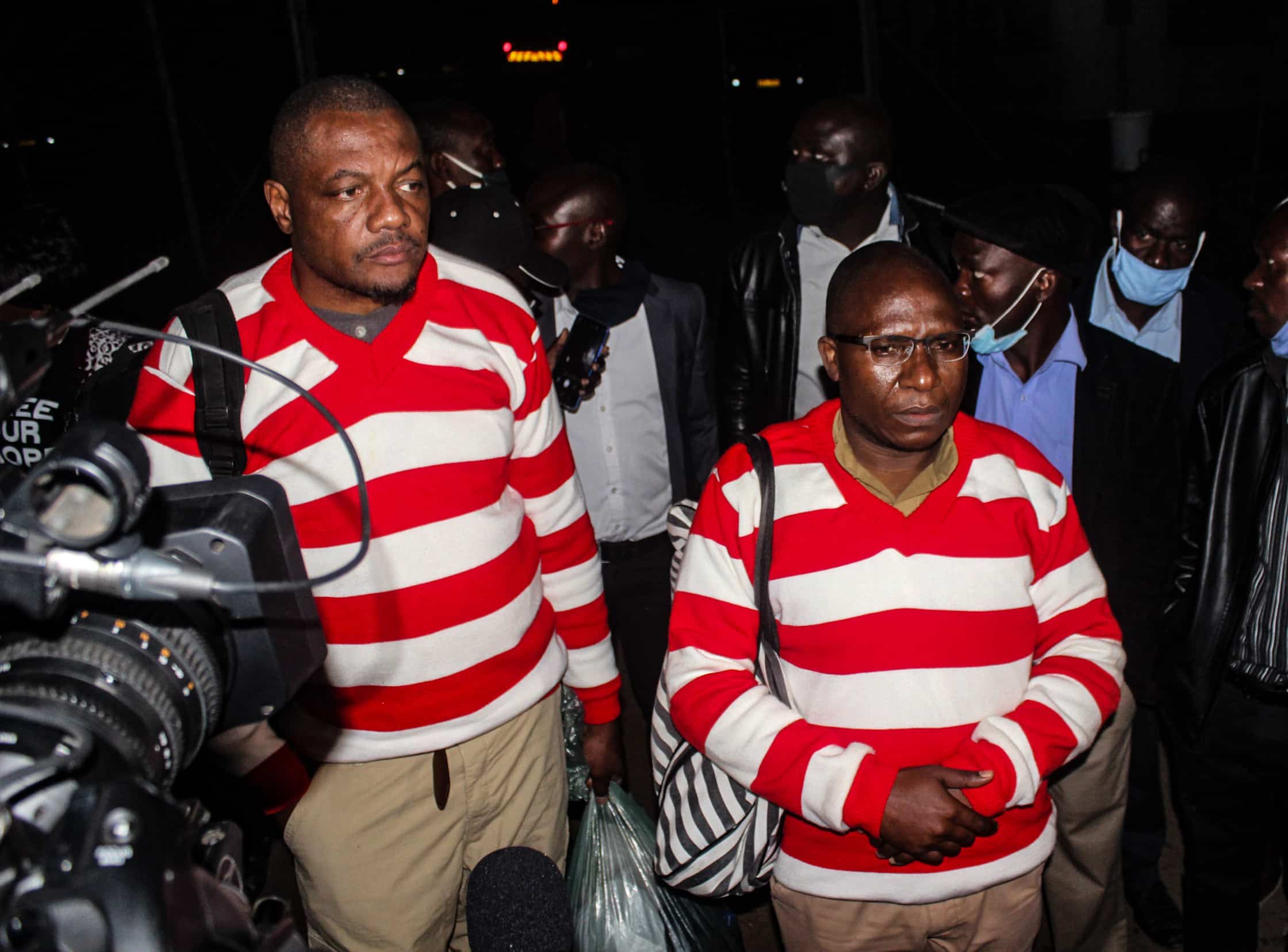 OPPOSITION leader Jacob Ngarivhume (pictured (R) with Hopewell Chin’ono), who has been put on surveillance from the Central Intelligence Organisation for mobilising citizens against bad governance, said he will soon be launching a civil rights movement focused on fighting corruption and rights abuses in Zimbabwe. Ngarivhume (JN) was speaking to The NewsHawks’ investigative journalist Bridget Mananavire (BM) on his political stance and future. Below are excerpts of the interview:

BM: You have been a politician for a while, and it is only now that we are seeing you being more radical. What informed this position?

BM: What makes you persistent and what drives you?

JN: It is what the people of Zimbabwe ask me to do. The call to end corruption in this country is deep-seated in me. I completely subscribe to the notion of us defying corruption, defiance.
We have got to defy the things we are seeing happen, we have to defy the abnormal which has been normalised in this country. And the people of Zimbabwe are tired of that and they have mandated us to speak on their behalf.
They have asked us to lead as far as this fight is concerned and we have accepted the challenge and we have humbly taken this obligation and responsibility to speak out against corruption and speak the mind of the Zimbabweans and this is what we are doing. And our belief in that call is so strong that it forms the basic engine of what drives us.

BM: You are one of the politicians that have been placed under the Central Intelligence Organisation surveillance. Do you fear for your life and that of your family?

JN:  I wish I did not fear that, but who cares given where I am? This is part of the price to pay. These things have been happening for some months now. You know you are under surveillance; you face intimidation, you face harassment every day, you know they build false cases, false narratives. They build weird and strange stories, they threaten, they do everything.
But that never moves us from the position that we hold, the need to fight for a better Zimbabwe, the need to speak out against evil, the need to speak out against that which is wrong and the need to converge Zimbabweans wherever they are and whoever they are to come together to speak together with one voice to say we are sick and tired of a nation that is going down the drain and yet we are a blessed nation. That is our mandate and that is all we say and that is all we believe in.
Because of our intention to achieve that we are so determined and so strong, so yes all those things might be there, but the resolve is equally strong, our resolve is unquestionable.
Our strength and belief in ourselves that we can achieve the things we are calling for is so strong that it takes away all the fear and, above everything, we have utmost faith in God, that at the end of everything, He will protect us and preserve us and guide us from all evil.

BM: What is your end game?

JN: It is to see a better Zimbabwe where national resources are used for the benefit of everyone, where there is respect for human rights and the rule of law, where everyone is equal before the rule of law and the Constitution of the country is respected, where access to resources is for everyone and not just a group of individuals.
This is our goal, and this is the Zimbabwe we want to see and this is the Zimbabwe we hope to achieve.

BM: We have seen people being militant before and they ended up just being state-sponsored projects. The same is being said of you, how would you respond to this?

JN: The anti-corruption drive is not my project, let us come together and work together for the greater good of Zimbabwe. Let’s preach unity, let’s not personalise such a national movement that is gathering momentum.
It’s never about individuals but for the good of the people of Zimbabwe and we are reaching out to all Zimbabweans irrespective of political affiliation, irrespective of who you are, where you are coming from, this is for every Zimbabwean and we must be coming together. And we should never, never personalise this struggle, the struggle is for all Zimbabweans and this is who we are and what we are saying.

BM: Are you going to run for president in the 2023 national elections or you are still open to a coalition?

JN: For now, all focus is to fully build an anti-corruption movement in Zimbabwe, and we would not want to divert from that attention. It is an important focus which the people of Zimbabwe have defined to us, they have asked us to lead that initiative and we are doing it with many other Zimbabweans and what is important right now is to focus on that drive and how the people of Zimbabwe want to define the future, it is entirely up to them.
We are saying Zimbabwe, let’s come together, we are building this national convergence to make sure we achieve the anti-corruption objectives that we have set, and this is our focus currently. Should the people of Zimbabwe want to define the future, it would be premised on what we achieve now and it is important to focus on this drive we are looking at.

BM: What is your relationship with the MDC Alliance?

JN: The MDC Alliance is a very important movement whose voice is critical in the fight against corruption. My call to the MDC Alliance and other groups is for us all to join hands and work together, to deal with this cancer that is destroying our country and killing our heritage and our future. We engage like compatriots, we exchange notes, we speak to one another and it is important to keep that unity going forward and this is the relationship that I have with the MDC Alliance and other opposition groups and this is the relationship we have with all Zimbabweans. We are saying come let us work together for this important movement.

BM: What is your relationship with MDC Alliance deputy chairman Job Sikhala, whom you seem to have partnered and are working with?

JN: He is my friend and compatriot, we shared the same cell at Chikurubi Maximum Prison, we shared the same ordeal and we have gone through same experiences, so is Hopewell Chin’ono, my compatriot and brother again.
We developed a friendship which is purely focused on our fight and drive against corruption and we are calling many other Zimbabweans, to come and be with us, we want this initiative not to be led by a few but by many of us so that we drive it into the direction and guidance that the people of Zimbabwe expect.
So, yes, there is a very special relationship with my compatriots Chin’ono and Sikhala and many others who are coming on board and we cherish that relationship.

BM:  There seems to be infiltration of the opposition. In light of this, how strong is opposition politics  at the moment?

JN: Infiltration is bound to happen everywhere, we understand that as the opposition there could be some infiltration, just like there could be infiltration in the ruling party as well, a lot of information is coming out from the ruling party so it’s neither here nor there.
What is important is to remain focused, it is to keep our eyes on the ball and never allow ourselves to be distracted from that focus. So whatever happens we continue to build, we continue to consolidate and come together. Look at the (31 July) movement, this is a platform calling for national convergence and Zimbabweans are responding to it, and this is our focus. Our focus is not to be diverted by whatever they are doing amongst us. I think the opposition understands that, we understand that Zimbabweans need to stay focused and that is enabling us to grow from strength to strength. I understand that there are challenges that are posed by this infiltration, but ultimately I think the opposition will emerge stronger from all the distractions that the ruling party is trying to throw in our way.

BM: What’s next after the 31 July movement?

JN: The 31st July protests were just but the beginning, this marked the birth of the anti-corruption movement, of the civil rights movement to fight against corruption, to fight for rights to life, education, social justice, to protest. There are many civil rights that have been trampled upon by the regime for years and the people of Zimbabwe are realising a need to come together to fight for that. This is a birthing of a movement to keep standing in the gap, to keep fighting corruption and to keep fighting for the people’s rights. So the protest was not an event but the birthing of a movement which is now galvanising and gathering momentum and soon it will be officially launched.

BM:  Do you think a revolution will be the solution for Zimbabwe?

Culture of corruption must be dismantled

Zim has everything except good leaders