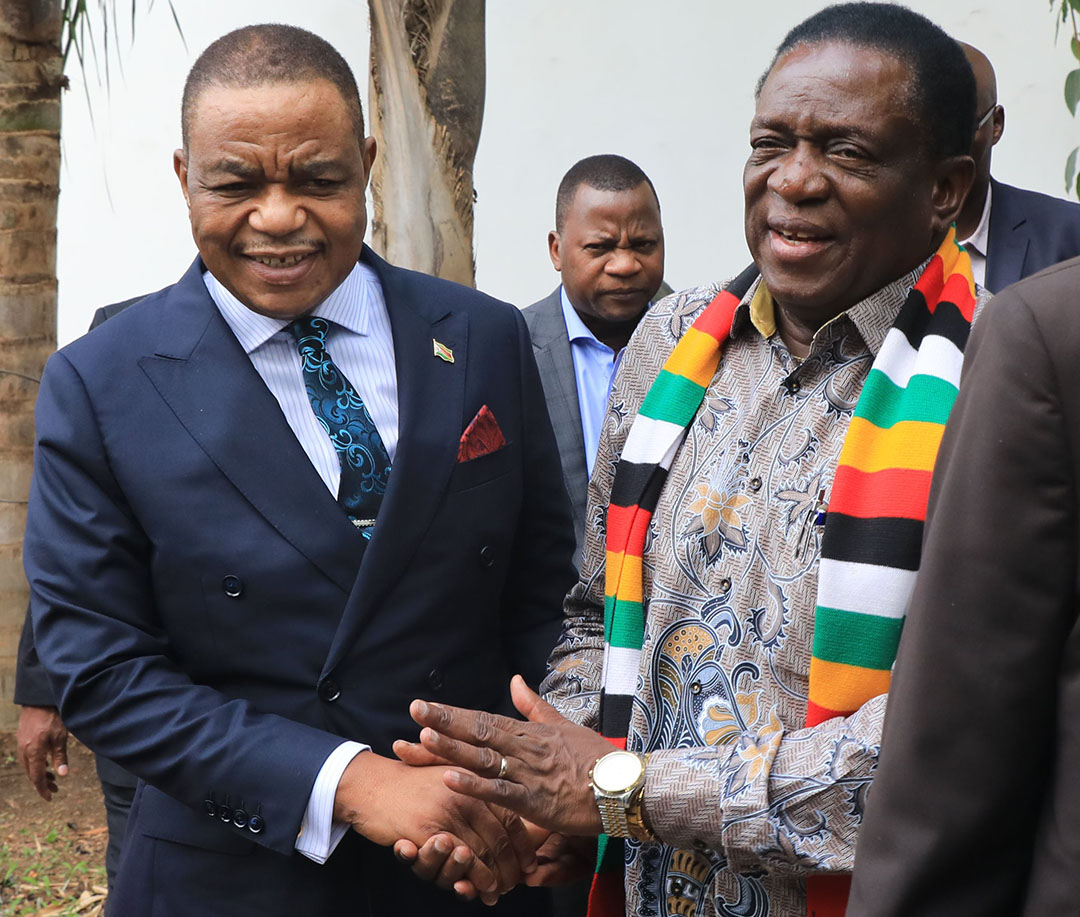 WHILE the poisoned relations between President Emmerson Mnangagwa and Vice-President Constantino Chiwenga are hardly spoken about publicly, close allies say the former army commander feels betrayed by the Zanu PF leader who is trying to outwit the military faction by backtracking on an agreement to serve only one term.

Chiwenga’s allies say there was an agreement between the former commander and Mnangagwa after the November 2017 coup that the Zanu PF leader would run for one term before handing over power to him.

However, Mnangagwa has betrayed the agreement and is insisting on standing again for another term against their agreement, in a development that has angered Chiwenga and his allies who are now are pushing for the ex-military chief to challenge his boss at Zanu PF’s elective congress in October.

“The VP feels betrayed by Mnangagwa,” an insider said this week. “With all the work Chiwenga did, he felt the two would remain true to their agreement but Mnangagwa is consolidating his base and he is not happy with that.”

Chiwenga has stood with Mnangagwa in the Zanu PF factional fights since he rose to power as the Zimbabwe Defence Forces (ZDF) boss in 2004 taking over from the late General Vitalis Zvinavashe.

The former military boss has played vital political roles since coming in as the army commander in 2004 until the 2017 military coup that saw the ouster of long-time ruler Robert Mugabe, with his allies now saying Mnangagwa’s insistence on a second term is the greatest betrayal.

The Chiwenga-led military played a critical role in the rise of Mnangagwa.

In 2008, Mugabe and key allies had conceded defeat to founding MDC leader Morgan Tsvangirai, and it took the military to convince him to stay after spearheading a violent and murderous campaign ahead of the June 27 runoff that saw countless opposition supporters killed and thousands displaced.

The campaign was instituted by Chiwenga and the military, with Mnangagwa, by his own admission, being the civilian face of the campaign after Mugabe’s loss to Tsvangirai.

The military has been at the centre of power dynamics in Zimbabwe, ultimately leading to Mnangagwa’s rise in 2014 as Vice-President despite his camp losing ground to the faction led by former army boss Solomon Mujuru whose wife Joice was VP.

The Mujuru faction emerged stronger in 2004 following a foiled attempt by Mnangagwa to takeover leadership in what came to be known as the “Dinyane declaration” in Tsholotsho.

Mujuru consolidated his power base with Joice as Vice-President in 2009, with the faction strengthening its grip on vital organs including the control of cabinet, the Zanu PF politburo and central committee and looked set to take over from Mugabe ahead of the Mnangagwa faction.

Mugabe, after the 2008 elections and subsequent runoff, chose to work with the Mujuru faction as he was bitter with the apparent betrayal by Mujuru.

Mujuru was to die in a mysterious inferno at his Beatrice farm which observers attributed to Zanu PF factional intrigue.

The former military boss’ demise saw the crumbling of the Mujuru faction as it marked the beginning of vicious attacks on the vulnerable Vice-President Mujuru who was hounded out of the ruling party by Mugabe and his wife Grace.

After the 2014 congress that saw the ouster of Mujuru and her allies, Mnangagwa, with Chiwenga’s backing, took firm grip of the party before the G40 faction proved a threat to his motives.

The G40 camp, comprising Grace, former ministers Saviour Kasukuwere, Jonathan Moyo, and Patrick Zhuwao, among others, had coalesced around the Mugabes and appeared set to take control of the party, leading to Mnangagwa’s ouster before he fled to South Africa via Mozambique in 2017.

While Mnangagwa appeared subdued and in exile, Chiwenga made a decisive decision that saw him masterminding the military coup that ousted Mugabe.

When Chiwenga’s allies were calling for the then army boss to take over as President, many, including his allies in the military, opted for a civilian leader hence Mnangagwa’s name came up to avoid “confirmation” of a coup.

Chiwenga was even given a nod by Mugabe to take over but rejected and opted for Mnangagwa on the basis of an agreement that he would run for one term before handing over power.

Mnangagwa has reneged on the agreement and is vying for another term which, if he wins, will serve until 2028.

Chiwenga has lost key allies in Foreign Affairs minister Sibusiso Moyo, Lands minister Perrance Shiri, among others who, according to official communication,0 succumbed to Covid-19.

Several of Chiwenga’s allies including former Presidential Guard commander Anselem Sanyatwe were deployed as ambassadors to other countries to dilute the military influence and consolidate Mnangagwa’s rule at a time the military boss was critically ill.

Another of his key ally Engelbert Rugeje survived what the Chiwenga allies said was an assassination attempt when gunshots were exchanged at his Mt Pleasant home last year.