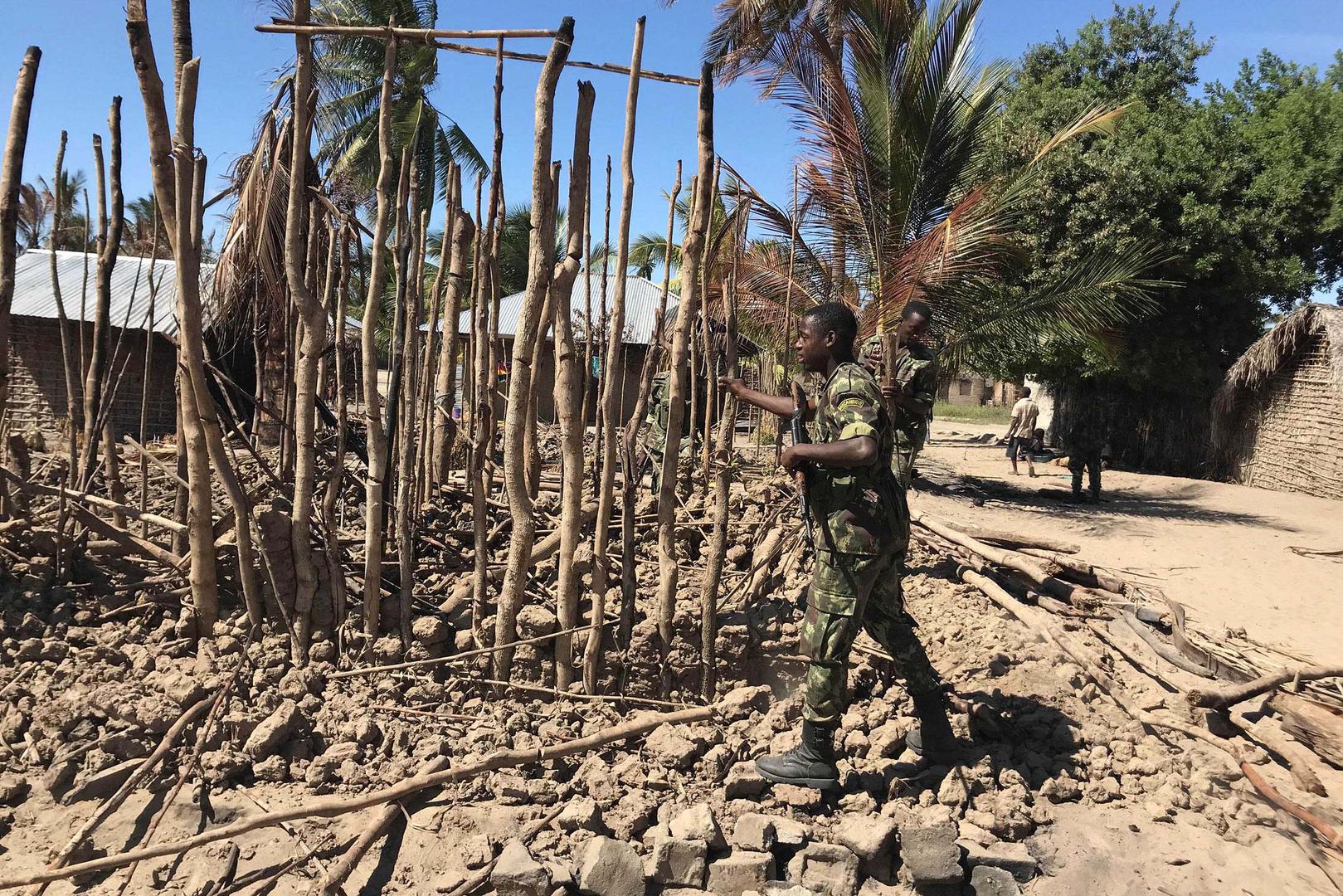 Situation Summary
Civilians in Palma town remained under threat last week, with insurgents returning to the town and clashes between insurgents and government troops forcing more people to flee for the Tanzanian border. On 19 April, civilians discovered the bodies of three young men who had been killed in the town.

Locals said that the men were likely killed by government forces, who have been conducting violent sweeps of the town in an attempt to root out insurgents.

Increased fears of insurgent activity in Pemba resulted in tragedy on 22 April, when government forces killed a young trader as he rode on a moto taxi past a security force checkpoint.

The taxi did not stop at the checkpoint as a result of a misunderstanding. Government troops fired at it as it passed, killing the passenger and wounding the driver. Terrified, the driver continued driving all the way to Pemba hospital, but the passenger was dead by the time he arrived.

On the evening of 23 April, an attack believed by sources on the ground to have been perpetrated by insurgents resulted in at least five civilian deaths and seven homes burned in Palma’s Expansão neighborhood. Civilians displaced at Quitunda who asked government troops about the attack received no response, increasing fears that insurgents will target Quitunda directly.

On 25 April, fighting erupted again in Palma town. Civilians in the town reported hearing heavy gunfire and explosions. Many people who had been staying in the town left, heading north towards Tanzania in hopes of being transported to the Negomano border post in Mueda district, from which they can travel to Mueda town or Pemba.

Others joined the over 20,000 displaced people still stranded at Quitunda, from which there is little hope of evacuation in the near term.

Vidigal also said that insurgents kidnapped 150 youth during their raid on Palma, of whom three were able to escape.

A woman who was among those kidnapped during the Palma attack was among a group of 48 displaced civilians who arrived in Nangade town early last week, having escaped insurgent custody. She reported that insurgents had attempted to march her and a large group of other civilians toward Pundanhar, in western Palma district.

The convoy, which also included food and other goods looted from Palma, was eventually intercepted by helicopters associated with government forces on 27 March. It is unclear if the helicopters were from Dyck Advisory Group or if they were associated with the Mozambican military.

The helicopters attacked, killing many of the insurgents and wounding some of the displaced civilians. The civilians escaped, walking only at night until they reached Nangade, roughly 100 kilometers west of where they started.

The Southern African Development Community (SADC) technical team report, discussed in depth below, reported an earlier insurgent attack. According to the report, insurgents killed one woman on 16 April in an attack on “Nagunde,” Muidumbe district — presumably Nangunde, a village north of the district capital of Namacande.

Incident Focus: SADC Recommendation
The SADC technical team charged with delivering recommendations for a potential SADC intervention in Cabo Delgado has turned in their report, and Cabo Ligado has seen a copy of its main text. The report, which the technical team will present at a SADC Double Troika meeting on 29 April, paints a damning picture of the Mozambican government’s counterinsurgency effort thus far and recommends a significant regional military intervention.

The technical team was led by Botswanan Brigadier Michael Mukokomani and also included representatives from Angola, South Africa, Malawi, Tanzania, and Zimbabwe. There was no Mozambican representative.

The team worked quickly, meeting with Mozambican military leaders in Maputo on 15 April and then touring Cabo Delgado on 17 April. Based on its meetings, the team concluded that the Mozambican military “requires immediate support in the fields of Air, Maritime and ground operational capabilities [sic].”

The report states that Mocimboa da Praia town and port have “been under the control of terrorist [sic] since August 2020,” contradicting periodic government claims to the contrary. It also says that insurgents remain at two bases known as “Siria” and another known as “Mbau,” presumably in the Mbau administrative post in southern Mocimboa da Praia district. Mozambican forces have claimed operations against all of these bases in the past. The team assessed that the pace of insurgent attacks would likely increase after Ramadan.

The team also couched the threat posed by insurgents as regional. Evaluating likely insurgent courses of action, the team predicted that the group would pursue “terror activities in the identified countries that are seen to be supporting Mozambique.” The insurgency’s goal, the team assessed, is to “expand the caliphate in Cabo Delgado and to the SADC region.”

To address the perceived regional threat, the team presented two plans. The first is a deployment of SADC forces (at a level the report describes as “minimal”) to Cabo Delgado to “support [the Mozambican military] to neutralize the terrorists in the Area of Operation.”

The second is a training and logistical support package that would keep foreign troops out of the combat zone in Mozambique. The team recommended pursuing both plans simultaneously, bringing in foreign troops to help with the fighting while standing up the training mission.

Despite the report’s characterization of the planned deployment as “minimal,” it would actually be quite substantial. The proposed deployment would come to 2,916 personnel, as well as seven helicopters, five fixed-wing manned aircraft, four drones, two surface patrol ships, and a submarine.

The bulk of the forces — 1,860 troops in all — would come in the form of three light infantry battalions.

The proposed distribution of forces — over 2,000 infantry and special operations forces all told, supported by seven helicopters — suggests an operations plan very similar to the one currently employed by Mozambican forces, in which ground forces move mostly by road and conduct limited dismounted patrols.

The maritime aspect of the proposed deployment, however, would offer a significant augmentation of the Mozambican military’s current capacity at sea, potentially improving Mozambique’s ability to counter insurgent littoral operations. The proposal would also increase Mozambique’s intelligence and reconnaissance capabilities, largely through added intelligence-gathering platforms.

The recommendation comes at a time when debate on the presence of foreign troops in Mozambique is heating up domestically. Renamo leader Ossufo Momade explicitly called for direct intervention in Cabo Delgado by SADC countries last week, saying that Frelimo was not as concerned about national sovereignty as it appears to be today when it invited foreign troops to help fight Renamo during the Mozambican civil war.

Frelimo secretary-general Roque Silva, in contrast, told reporters that foreign troops would not be effective in Cabo Delgado and said that only logistical support for Mozambican troops was necessary.

Silva’s statement seemed to echo Mozambican president Filipe Nyusi’s speech two weeks ago, in which he seemed to categorically oppose the prospect of foreign troops involved in combat in Cabo Delgado.
Mozambican Prime Minister Carlos Agostinho do Rosário, speaking to parliament on 21 April, attempted to side step the debate.

Despite do Rosário’s attempts to quiet debate, response to the leaked SADC proposal has been vociferous from some corners of Mozambican civil society. The Center for Democracy and Development (CDD) slammed the proposal, calling the deployment plan “inappropriate” and criticizing the SADC team for not meeting with independent experts.

The proposed deployment, CDD said, is “almost [the size of] a Mozambican army,” and would likely destabilize combat operations while providing no solutions to the social and humanitarian crises at the center of the conflict. The report included no clear proposals for deployment of civilian assets to conduct humanitarian operations.

Those people are still not being reached by international food aid, largely as a result of a standoff between international aid groups and the Mozambican government over who will distribute the food.

According to Joseph Hanlon’s Mozambique newsletter, the government insists that it should be the one doing the distribution, while the World Food Programme wants to handle distribution independently. Until the deadlock can be resolved, no international food aid can travel to Quitunda.

As it currently stands, the government is not making a compelling case for itself as an effective food distributor in Palma district.

Things on the ground around Palma are so disorganized that, according to Hanlon, the government sent six trucks loaded with food to Palma via barge about two weeks ago and then put the trucks back on the barge without unloading the food because the drivers could not find anyone from the government’s humanitarian office (the INGD) to handle the distribution.

Hanlon’s sources also said that private citizens put together a 100 ton food shipment, and were angered when Frelimo seemed to appropriate 20 tons of it for distribution at a party rally in Palma and then the other 80 tons went missing altogether.

This account tracks with another, reported by Zitamar News, in which a 90 ton food shipment from Pemba was simply deposited on the beach at Afungi with no one available to distribute it.

In the meantime, displaced people are attempting to leave Quitunda any way they can. About 210 people arrived by boat in Pemba last week from Quitunda, having apparently traveled in contravention of a strict government order against unauthorized coastal sea travel north of Pemba. In total, the United Nations International Organization for Migration counts 27,913 people having fled Palma district since the 24 March attack, not counting those still stuck in Quitunda.

Of those, 5,749 of those have made it all the way to Pemba, and many of them have spent time in the Centro Desportivo, a sports complex that was converted into a transit center for displaced civilians.

According to the most recent available report, the population at Centro Desportivo is down to 124 people from a height of 315 on 14 April, indicating that people are being moved on to host communities and relocation sites in southern Cabo Delgado, but there is still work to be done to find housing for people displaced from Palma.

Elsewhere in the province, the cost of the conflict continues to mount. Cabo Delgado provincial secretary Armindo Ngunga — who has been appointed head of the Northern Integrated Development Agency, a development Cabo Ligado will cover in depth next week — told reporters last week that insurgents have destroyed 313 kilometers of electric lines in the province, which will cost about $5.1 million to fix.

Mozambique’s Chamber of Commerce also reported that local businesses have lost $90 million as a result of the Palma attack. Chamber president Agostinho Vuma called the situation a “nightmare for the private sector,” as there is no clarity over when subcontractors involved in the Afungi natural gas project will be paid or when work will resume.

The plight of those businesses will not be helped by Total’s decision to declare force majeure in response to the Palma attacks, suspending all onshore contracts with the French energy major.

An industry expert called the declaration “the nuclear option,” indicating Total’s complete lack of faith that the security situation in Cabo Delgado will improve soon. It puts the possibility of Total pulling out entirely on the table, a scenario that would radically reshape the political and economic environment in Mozambique as a whole and would be catastrophic for the Nyusi government.

In addition to a possible SADC deployment to help forestall Total’s complete withdrawal, Frelimo figures are increasingly making the case for special tribunals to handle prosecutions of insurgents.

The current difficulties the government is having securing convictions against alleged insurgents in existing courts, however, have more to do with the lack of evidence available against defendants and prosecutors’ lack of resources than the legal structure of the Mozambican court system.— Cabo Ligado Weekly

No sorrow in Zaka as 2008 terror leader dies