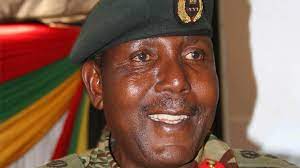 ZAKA residents say they are not sorry about the recent death of a Zimbabwe National Army colonel, Christopher Rufu Mayoyo, who led a murderous terror campaign against opposition supporters in the district during the run up to the June 2008 run-off election.

MORRIS BISHI
The military officer’s brutality left more than 10 people dead and dozens others injured, some of them maimed for life.

Mayoyo, who came from Mayoyo village near Jerera Growth Point in Zaka, died last Friday and was declared a liberation  war hero. He was buried at his Jatala Farm on Tuesday this week.

He was in charge of a military death squad in Zaka which led a bloody rampage after Robert Mugabe and Zanu PF lost the 2008 general election to the opposition MDC in the first round of polling in March that year.

In 2012, Mayoyo sued the late MDC leader Morgan Tsvangirai and Alpha Media Holdings (AMH) for $500 000, saying he had been defamed by the late opposition leader who had claimed during a rally in Zaka that Mayoyo was walking scot free after leading a reign of terror which claimed the lives of opposition supporters.

Tsvangirai and the media house dismissed the claim, saying it lacked merit. Former Zaka West legislator Festus Dumbu told The NewsHawks that it is tragic that Mayoyo died a free man after masterminding a terror campaign which claimed innocent lives. He said locals have no kind words for the unrepentant murderer.

“As the people of Zaka we are not sorry about the death of Mayoyo who caused terror in our area in 2008. We lost many people and it is not a secret that Mayoyo was the leader of army officers who were operating here and you even know that these guys were based at Ferry Training Centre and their operations led to the death of many people as well as the displacement of tens of people. Seeing this man dying before facing justice is unfair to us. We have no kind words for his fate and it will take more than three generations of people in our area to forgive even the family which he left behind,” fumed Dumbu.

The MDC Alliance councillor for Ward 19 in Zaka, Peter Imbayarwo, told The NewsHawks that it is difficult for the people of Zaka to mourn someone who caused untold suffering in the district.

He said Zanu PF is callous as it is unthinkable that an army officer can be deployed to murder citizens in his own home area. He said the people of Zaka will not forgive the perpetrators of the 2008 atrocities.

“I first won elections as a councillor in 2008 and MDC had an office in Jerera which we used as a planning centre for  our election campaigning but the office was petrol bombed by people we know. “Two people, Krison Mbano and Washington Nyangwa, died during the arson attack and a few guys survived the attack. I still experience nightmares from that incident and it becomes worse when I meet those who survived during the attack. Several families were left without breadwinners and daily we are seeing children who are suffering because of the 2008 violence,” he said.

Imbayarwo added: “Mayoyo was the leader of terror here in the district. The guys were driving Mitsubishi, Mahindra or Cam vehicles without number plates and they addressed several meetings threatening people with death. All Zanu PF bases reported to Mayoyo. Go and ask people from Zaka, they will tell you that all those who lost their lives were taken from bases by the vehicles which l told you.”

A victim of the 2008 atrocities told The NewsHawks that it was painful to hear that Mayoyo had died without facing justice. He said the late colonel stopped visiting his rural home at some point as it was now difficult for him to face innocent people he had terrorised.

“l am now disabled after surviving the 2008 violence. I can still remember this guy collecting one of these guys who went to school together with Elias Mudzuri from Gwangwava Zanu PF base. The guy, who was a former military officer, was accused of being a friend to Mudzuri, but by then he had left the army on medical grounds.

“The decomposing body of the guy was later recovered after one week. This is what happened in our area and feeling sorry for Mayoyo’s death is mockery to humanity,” said the victim of political brutality.

Noise in the cockpit as Mwonzora counters President Mnangagwa