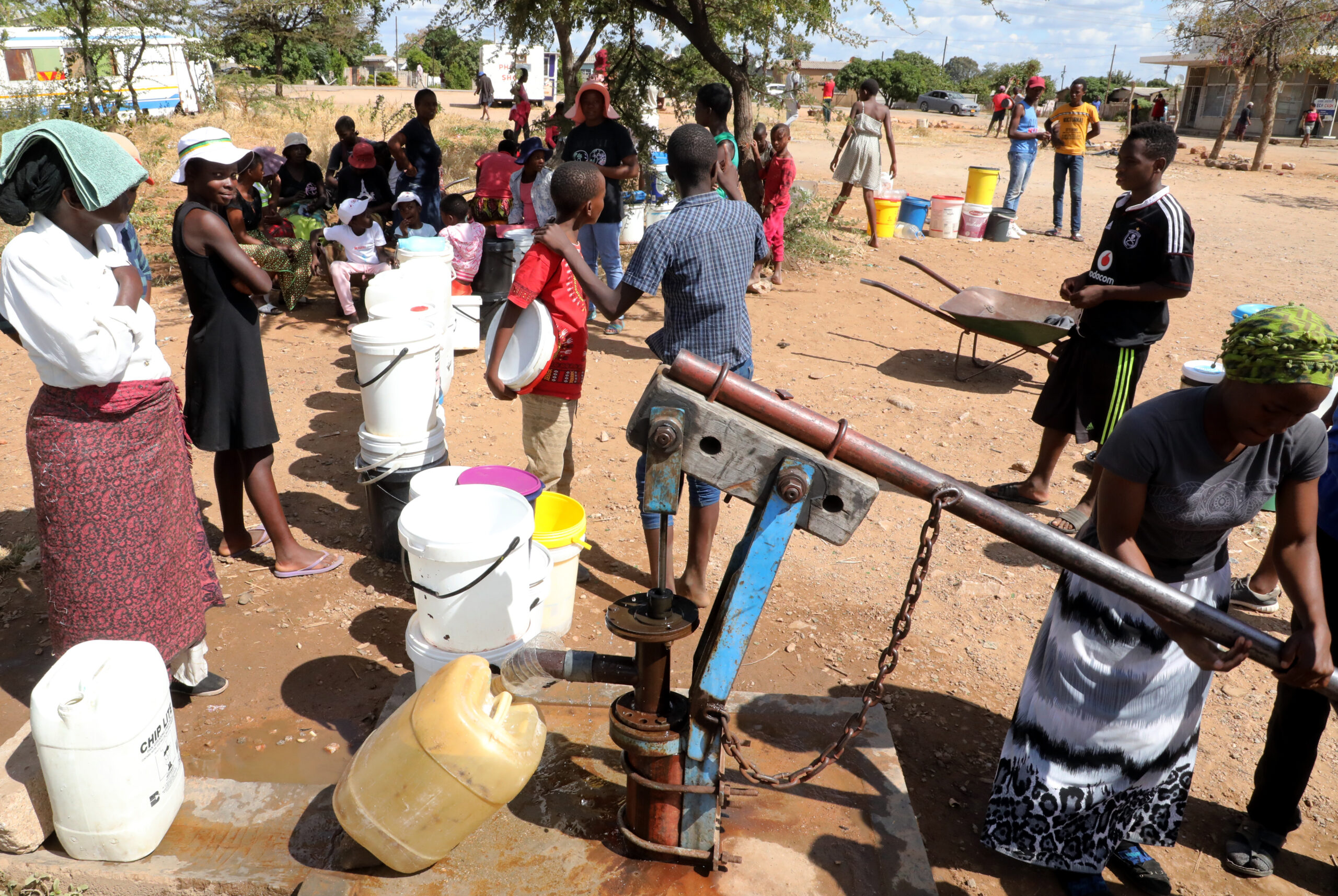 THE current water crisis in Bulawayo — located on a plain that marks the highveld of Zimbabwe and is closer to the watershed between the Zambezi and Limpopo drainage basins — characterised by rationing and cutting off supplies, is not a new phenomenon.

Usually, Zimbabwe’s second-largest city cuts running water supplies amid reports that its reservoirs are dry due to severe droughts, crumbling infrastructure and outbreak of waterborne diseases.

Bulawayo’s 676 000 residents always have been restricted to tap water once a week sometimes as storage capacity dwindled to as low as 26% or one day’s supply.

While the water crisis seem to be a problem of lack of water sources and changes of rainfall patterns – before the current heavy rains – in reality it is not just a crisis of lack of water, but more importantly a crisis of leadership and governance deficit at local and national levels.

The shortage of water has bedevilled the city since it established in the 19th century.

The Bulawayo area has been populated since prehistoric times. The San people painted their pictures in the caves of the Matobo Hills, the Rozvi kings built a stone city at Khami and the Ndebele State kings founded the city and gave it its name.

Bulawayo has been an administrative capital of the Ndebele State since the late 1840s after the arrival of King Mzilikazi and his people from Zululand and the transvaal region following their departure in 1820 amid Zulu King Shaka’s regionally disruptive mfecane wars.

It officially became the capital of the Ndebele State when Lobengula, one of the sons of King Mzilikazi, ascended to the throne. The initial town was established in 1872 and was known as Gibixhegu, but it was later renamed Bulawayo after a fierce succession civil war between Lobengula and his rival Mbiko KaMadlenya of the Masuku clan, who was Mzilikazi’s son-in-law.

Lobengula won the civil war which broke out after Mzilikazi’s death in 1868 and ascended to power in 1870. He ruled present-day Zimbabwe for 23 years until he was toppled by colonial invaders.

Bulawayo’s water problems date back to that period when the British South Africa Company (BSAC) seized power from Lobengula in 1893 and firmly took charge after the 1896 Ndebele/Shona uprisings, with jurisdiction over the whole country and indeed the city.

In 1898, the BSAC granted Bulawayo Waterworks Company the authority to supply the town with water and electricity. The capacity of the company to meet the water needs of the growing town was severely constrained even after the construction of Hillside dams in 1898.

Residents of Bulawayo regularly complained about the company’s inability to supply clean and regular city for the city. The Hillside dams were up to then the only supply source for the city.

In 1924, after a protracted legal battle and following the referendum in which Rhodesia voted to be independent from the Union of South Africa, the dams were handed over to the Bulawayo Town Council. A sum of 117 000 pounds was paid to Waterworks Company.

The history of different entities being in charge of water supply for the city is therefore not new. To their credit, colonial administrations built a number of other dams to supply the city namely:
1928 – Khami Dam;
1943 – Lower Ncema;
1956 – Umzingwane;
1973- Upper Ncema; and
1973- Mayfair (Insiza) Dam

So colonial administrations constructed more supply dams for the city of Bulawayo than Zimbabwe’s post-independence black government which only built Mtshabezi Dam in the 1990s — the dam’s pipeline to the city was only connected in 2013.

We can thus infer that there was proper planning and allocation of resources during that time. The five supply dams which were built prior to Independence were also constructed by the local authority.

We can also draw various conclusions from this, but it is clear that the advent of centralisation and monopolisation of bulk water supply by the post-colonial government has occasioned lack of investment in water supply and infrastructure while population grew, hence shortages.

There were, however, pre-existing conditions which enabled the council to have both the will and capacity to build supply dams almost every 15 years, while the Zimbabwe National Water Authority (Zinwa) has built only one new supply dam for the city in 40 years – a dismal record.

The factors contributing to this include the state of the economy and revenue authority collections, among other reasons, which all speak to leadership and governance.

The fact that the Bulawayo water crisis has lasted more than a century shows there has been no political will and capacity, imagination, seriousness, as well as leadership and governance capabilities to resolve the issue.

A century has passed since the idea of resolving the chronic water woes of Bulawayo and Matabeleland region by constructing a 450km water pipeline from the Zambezi River to Bulawayo was initiated in 1912 by the colonial administration.

The project, when conceptualised, was expected to spur socioe-conomic growth by creating a green belt of agricultural projects in the region. To date, the project is yet to come to fruition.

Many studies sought to unravel factors accounting for this policy inaction, drawing from implementing experiences in Africa and across the world.

One study revealed a series of interlocking factors relating to the nature of the project, legal hitches, fiscal incapacity, and regionalisation of the project, among others.

The bilateral route recently adopted by the government should be vigorously pursued. Government should also mobilise local funds through local public-private sector arrangements.

The Bulawayo water crisis is by its very nature multi-faceted and multi-dimensional, but can be largely attributable to the following:
*Centralisation of bulk water supply;
*Poor policy/legislative frame framework;
*Lack of political will from government;
*Misplaced priorities in budgetary allocations; and
*Leadership, governance and policy failures.

Failure to develop an inclusive water governance framework at national and local levels which involves citizens and relevant stakeholders has also been a huge problem. This is not withstanding the Zinwa Act which envisages the creation of local catchment councils.

Centralisation of bulk water supply, thus construction of dams through the Zinwa Act, was more of a poorly thought-out political strategy of social and political control rather than a suitable public policy approach to deliver service.

The fact that government through its water flagship built one dam in 40 years for Bulawayo, while a colonial municipality built five dams before that shows there is a problem with the centralisation approach, and indeed governance.

While devolving of water supply may cause administrative inefficiencies, there is little empirical evidence to sustain this argument.

The fundamental assumption though in local authorities being given the mandate to take over bulk water supply is that town councils, city councils and rural district councils have the requisite capacity to deliver on this mandate.

This was possible previously because of the broad revenue base which, for example the Bulawayo City Council had, and the hive of economic activity soon after independence.

Centralisation, especially of bulk water supply, has been one of the most monumental policy failures of this government which have contributed to the current water crisis.

This approach epitomises water governance failure by government and exposes policy contradictions given government’s current devolution and decentralisation policy, and importantly chapter 14 section 264 of the Constitution.

There is a need to revisit the Zinwa Act and the Water Act to give expression to a policy framework which prioritises an inclusive policy and regulatory approach within a devolved system of local governance and service delivery.

Government has spectacularly let down Bulawayo by persistently and consistently failing to allocate adequate resources to address the cities long-term water needs by building dams and infrastructure. That is besides the failure to build the Zambezi Water Project.

Of course, Bulawayo is not the only city with water shortages in Zimbabwe, but it has its own unique problems.

The Gwayi-Shangani Dam, which is expected to be the country’s third-largest inland dam after Kariba, Tugwi-Mukosi and Mutirikwi, is still incomplete even though a cabinet implementation matrix had envisaged that the dam would be completed at the end of 2018.

The government now says the dam will be completed in 2022.

This raises the pertinent question of development patterns and priorities, as well as justice in the allocation of state resources to different regions in this country.

It is clear there has been a lack of political will, state and governmental incapacity, fiscal dire straits and marginalisation issues when it came to the implementation of the Zambezi Water Project.

While government contributions have been notable in recent years and Covid-19 disruptions are a major issue, the reality remains that the water crisis in Bulawayo is a manifestation of chronic leadership and governance failures in Zimbabwe.