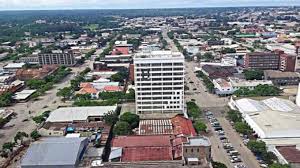 BULAWAYO is witnessing an unprecedented increase in the number of abandoned, neglected and derelict buildings in the central business district (CBD) in a clear sign of urban decay.

LIZWE SEBATA
The country’s second largest city has gone for more than two decades without any new infrastructural development in the CBD, with the Bulawayo Centre shopping mall, built in 1997, being the last project.

Even then, the Bulawayo Centre shopping mall project remains incomplete to date. Phase one of the construction of Bulawayo Centre began in 1994 and comprised 55 shops on two levels and business suites on three levels.

The second phase involved the redevelopment of Princess Court, a building adjacent to Bulawayo Centre, into shops and business suites and was completed in 2013 at an estimated cost of about US$10 million after work on the building had commenced the previous year.

Some of the businesses now occupying the building are a takeaway food outlet, a telecoms firm, pharmacies, micro-finance business, insurance companies and a law firm.

The third and final phase, costing an estimated US$4 million, which was scheduled to start in 2016, entailed turning the ground and mezzanine floors of a building (formerly a gym) next to the Princess Court into a mall, to be named Buyani Mall.

Upon completion, Buyani Mall was expected to house 37 shops with fast-food outlets and clothing retail shops earmarked to occupy the building.

A flyover cross-bridge linking the Mall and Bulawayo Centre was also expected to be constructed with a series of escalators and panoramic lifts expected.

However, to date the Bulawayo Centre mall project remains incomplete while other planned projects such as redevelopment of Basch Street bus terminus, popularly known as Egodini, into a mall hang in the balance.

TTPL began working on the project in March 2018 with the only known activity undertaken by the company being the relocation of vendors and public transport operators.

Other city properties are neglected, and dilapidated.

In 2017, the BCC condemned 35 buildings as unfit and in need of urgent attention. This followed the collapse of a building housing a popular fastfood outlet, killing one person.

“The lack of infrastructural development in Bulawayo is caused by four factors. First, Bulawayo is what it is today because of the Zanu PF policy of marginalising Matabeleland. Second, Bulawayo mirrors the general economic and infrastructure decay that has set in the past 41 years of Zanu PF mismanagement.
“Third, the BCC has done a poor job in marketing Bulawayo locally and internationally. Fourth, the water situation in Bulawayo is repelling potential investors,” argued Effie Ncube, a Bulawayo-based commentator.

In recent years, a number of companies have been either closing shop or relocating to other places, citing the unresolved water challenges facing the city. Residents currently endure a week-long water shedding regime.

“To change the situation will require BCC and government to ensure reliable water supply to investors and make Bulawayo as a better and rewarding investment destination,” Ncube added although he noted that this cannot excuse the fact that BCC has been weak and lethargic in attracting investments.

“We need a proper economic development policy agenda and vision for the city. These two can spur a drive for infrastructural development but of course not neglecting the water situation.”

“We have got a lot of investors expressing interest but the unstable economic conditions we find ourselves in are our major undoing. We have a country where legislation that is dangerous to investment is passed and this also affects investor confidence and development,” Ncube said on Wednesday this week.