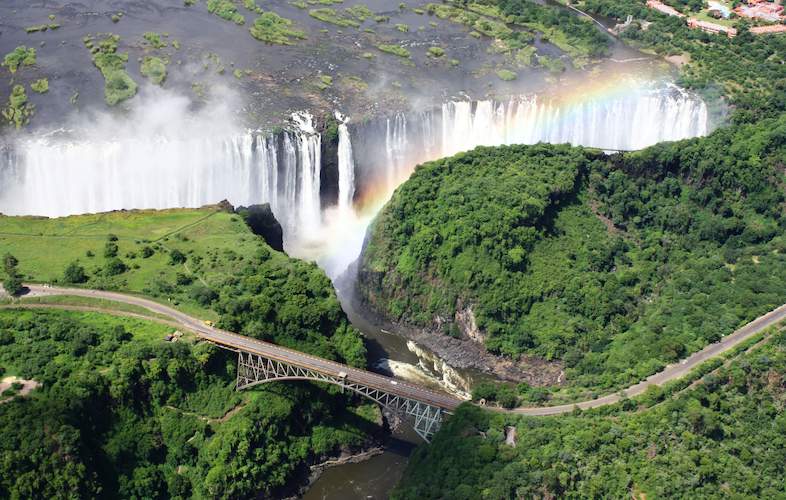 THE Cleveland Bridge and Engineering Company of Darlington, northern England – builders of the iconic Victoria Falls Bridge in Zimbabwe – has been placed into bankruptcy following long-standing debts of £21 million and the imposition of a further £1.5 million fine for negligence.

A judge declared that the move was inevitable because he considered that Cleveland could not possibly clear those debts.

It was in 1904 that the British builders won the contract offered by Cecil John Rhodes to create the bridge across the second gorge below the falls as part of his Cape-to-Cairo vision and it was completed the following year.

It had been designed for a single span of 650 feet, carrying a roadway, railway line, and pedestrian walkway in such a way that guests at the Victoria Falls Hotel could view it as trains crossed through the spray. Border posts at either end were established.

Maintenance schedules are now presumably being undertaken by local authorities.

Cleveland had also undertaken the building of 31 other bridges and engineering projects world over in a busy century.

These included the Auckland Harbour Bridge, the Nile Bridge in Sudan, the Wembley stadium arch, the Tsing Ma Shanghai River Bridge, the Firth of Forth Bridge, and the Humber Suspension bridges.

After the Victoria Falls Bridge in 1905, the company was also involved in 30 major projects around the globe that would include the 13.29 meter Rio–Niterói Bridge, a box girder conduit in Brazil.

Apart from mounting debts, the final straw for the company was the faulty positioning of a crane that caused its collapse and the fatal fall of its operator, which the judge declared was due to negligence and incompetence.

The Victoria Falls Bridge is now 117 years old and will remain a feature of the Victoria Falls landscape for a great many years to come, with bungee jumping and white water rafting prominent holiday activities, as well as considerable wildlife and the 100-metre high falls themselves.

The bridge was in the 1970s used as a neutral meeting point above the Zambezi River for the Chimurenga war settlement talks in the late 1970s.

It also is a trading route between Zimbabwe and Zambia, an entrepot to either country.

But the builders, Cleveland Bridge and Engineering Company, have now disappeared into history, its long-established reputation finally and fatally tarnished by debts and negligence.

The company managed to build more structures after the Victoria Falls Bridge.

While in the 1970s and 1980s Cleveland continued to win orders for important bridges over waterways both in Britain and abroad, notably the first Europe-Asia link over the Bosphorus in Turkey, two big jobs in London brought much attention to the company.

Both were a little outside their comfort zone, but both were successes. One of the projects was a major renewal job at Tower Bridge, an icon of the capital right next to the Tower of London (the Crown Jewels, Traitors’ Gate, Beefeaters).  It was a replacement of the Victorian machinery which for a century had raised the bridge roadways over the Thames to allow large ships to enter the Pool of London.

Although the Pool’s cargo wharves between the Tower and London Bridge had lost most of their trade to new ports downriver, it was unthinkable that it should, in effect, be denied access from the sea. The worn-out machinery had to go, and Cleveland replaced it with state-of-the-art electronic gear. More than 200 men, working in three shifts, had been needed to enable vessels to pass under the bridge round the clock. Now the work is done by six men. The roadways rise at the touch of a button. About a dozen miles downstream Cleveland was tasked with, in effect, saving central London from inundation.

There were increasing fears that the not-infrequent coincidence of major storms and high spring tides would one day send the North Sea surging catastrophically westward and over the low banks of the river, which is much wider here than at the Tower. The solution was an ingenious system of underwater shields that, when danger loomed, would swivel to form the so-called Thames Barrier. It was a huge construction task.

“The thing works. It is not often raised but the occasions are becoming more frequent. It has done its job so well that Londoners avow they would not feel safe without it, Climate change has made it even more reassuring. The new protection at Venice works along the same lines.

84-year-old Philip Harvey, now retired and living in a village near Darlington, was the chief engineer for both these projects.

He is saddened to hear that the collapse of his employer for many years was the result of alleged poor management. His own memories are of engineering excellence and solid achievement.

He spends much time tending and constantly improving his own grand project. Over more than 60 years he has built a splendid land and townscape of Victorian England. To a scale that makes its people fingernail height, it is a remarkable pageant of farms, railways, rivers, market-town centres, textile mills, churches, and; canal boats; any model that can be made to move is being gradually converted to electric motion.

Related Topics:BankruptcyCleveland Bridge and Engineering Company of DarlingtonVictoria Falls Bridge
Up Next