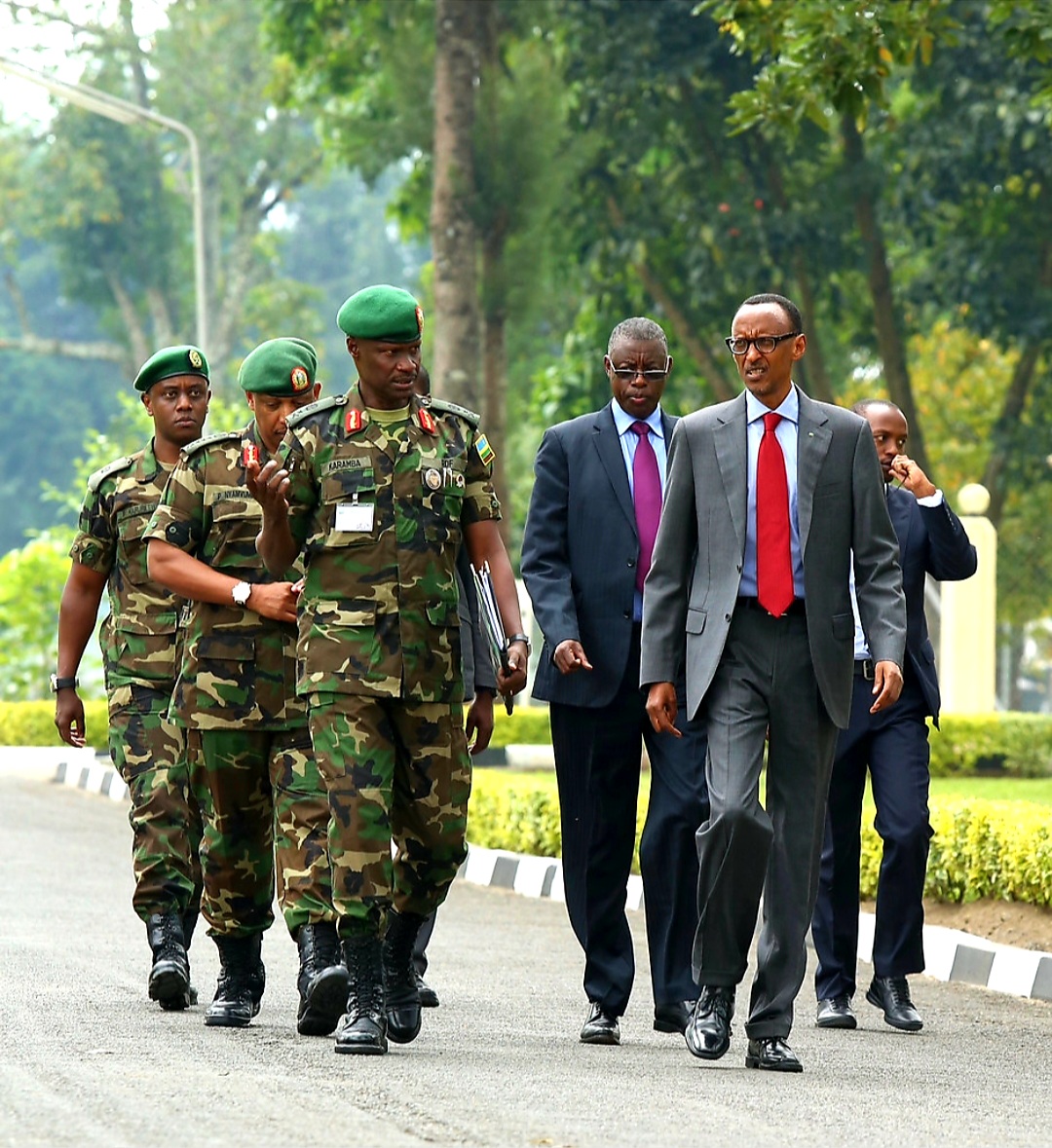 IN a sensational move that regionalises the Great Lakes’s unending volatile ethnic conflicts that have previously led to wars and killings, prominent Rwandan refugee leaders have written a letter to Southern African Community (Sadc) leaders claiming that Rwandan President Paul Kagame has deployed troops to Mozambique not just to help fight Islamic insurgents, but to establish regional hegemony.

This comes as Zimbabwe, which already has troops in Mozambique, is preparing to send more soldiers into the neighbouring country’s Cabo Delgado region where the insurgency is rooted.

“We, Rwandan refugees, are highly concerned with a hidden agenda of the Rwandan government behind the willingness to deploy its army (that is, the Rwandan Defence Force (RDF) to assist in the fight against armed rebel groups in Mozambique. In our own point of view and as will be demonstrated in this document, the deployment aims at achieving a three-fold strategy: (i) to have access to and destabilise Sadc countries with intent to sustain the colonialism or imperialism; (ii) to expand Hima-Tutsi-based leadership over the Sadc region, and (iii) to hunt down Rwandan refugees living in the Sadc region,” the letter says.

“As you may be aware, there has been a Hima-Tutsi ideology holding that the countries of the East, Central and Southern Africa must be ruled by Nilotic people, more particularly, Hima, Tutsi and Banyamulenge. This ideology of establishing the Hima-Tutsi Empire started by President Museveni (a Hima), when he launched a guerrilla war to depose Milton Obote regime and was uncovered by the invasion of Rwanda by the Rwandan Patriotic Front (RPF) Inkotanyi from its bases in Uganda, with the support of the President Museveni. The invasion was launched on 01 October 1990 with the sole aim and purpose to centralise power in the hands of a group of the Tutsi extremists, who were refugees in Uganda. The Tutsi ethnic group is minority in Rwanda.

“It is minority group in Burundi, the Democratic Republic of the Congo (DRC) and Tanzania. Likewise, the Hima are minority ethnic group in Uganda. However, these people – despite minority in the said countries – fight to have a control over Hutu/Bantu population in the Great Lake region and beyond.

“The plan to establish a Hima-Tutsi Empire in East and Central Africa was also echoed by Reverend Christopher Mtikila on 25 September 2015, when he appeared on one of the Tanzanian TV Shows called ‘Live Star TV’ during a Show called “Tuongee Asubuhi” (Let’s Talk in the morning).

He expressed his opinions and revelation of how the Hima-Tutsi Empire is expanding or spreading so fast to take over Tanzania, the same way they have taken over Uganda, Rwanda, and the DRC. In this show, Rev Mtikila illustrated how Tanzania was the next to be invaded.

Almost two weeks after revealing the architecture of the Hima-Tutsi Empire project in the region and after exposing those who are the project’s major financiers, Rev Mtikila died in a well-staged motorcar accident. It was undoubtedly an assassination aimed at silencing him.”
The refugee leaders further allege the ethnic project has been well-researched.

“Researchers define Hima-Tutsi Empire ideology as a set of political ideas nursed mainly by the Hima ethnic group from or in Uganda and Tutsi ethnic groups from or in Rwanda and Burundi, with a view to exercise their power and influence over the geographical space inhabited by the Bantu,” the letter says.

“It is further, for example, argued that the current Rwandan Tutsi-dominated leadership seeks to expand the Tutsi-Hima Empire on the pretext of hunting down Hutu refugees in the DRC and this had impact of turning the territory of the DRC into ‘a fully-fledged battlefield for Hutus and Tutsis’. In its aggressions against the DRC, Rwanda further justified its actions on the protection of the Tutsi minority (that is, the Banyamulenge) in the DRC against the Hutus.

“In turn, the Banyamulenge rose against the DRC government, backed by the Rwandan and Ugandan governments, with intention to take over the power in the DRC.”

The letter goes into detail about the purported ethnic hegemony agenda.
“The Hima-Tutsi Empire is further well explained by Remigius Kintu in his researched document entitled ‘The Truth Behind the Rwandan Tragedy’ dated 20 March 2005, submitted to the International Criminal Tribunal for Rwanda (ICTR).

“In this document, he articulated the long plan of the Tutsi to control and dominate the Bantu population in East and Central African region and how the genocide is used as a weapon to silence the Hutus from Rwanda. Hutus suffered a huge loss in the 1990-1994 civil war, but because they were defeated, they are politically and judicially blamed for the calamity that befell Rwanda as the narrative of the war accepted is that of the winner, and not the vanquished.”

The letter also talks about assassinations of leaders in the Greak Lakes.

“The desire to establish a Hima-Tutsi Empire is the main driving factor behind maintaining power in the hands of Tutsi minority through coup d’état, invasions, and armed violence in Great Lakes region. This is evinced by the desire to assassinate Hutu or Bantu presidents and elites, mainly in Rwanda and Burundi,” it says.

“Accordingly, there is undeniable nexus with the assassination of the first democratic elected President and the first Hutu President Malchior Ndadaye of Burundi in October 1993. He was assassinated by the Burundian Tutsi extremists who have been on power since 1960s. This was followed by the assassinations of two heads of the state – the former Maj-Gen Juvenal Habyarimana of Rwanda and Mr Cyprian Ntaryamira of Burundi in 06 April 1994. They were assassinated by the RPF combatants (i.e. the Tutsi), while they were coming from peace accords in Dar-Es-Salaam, Tanzania.

“Later, in 2002, President Laurent Kabila of the DRC was assassinated by the same Tutsi combatants. These assassinations are interconnected and were carried out to achieve the Tutsi-Hima supremacy in the region. Recent mysterious deaths of Dr John Pombe Magufuli of Tanzania and Pierre Nkurunziza of Burundi are also questionable.”

The letter further says recurring and persistent assassinations in the Great Lakes region “cannot be divorced from the reluctance of the Rwandan Tutsi minority to share power with the Hutu majority on the allegations that the Hutus committed genocide against them; the version which is not supported by many researchers”.

“In fact, the provisions of the 1993 Arusha Peace Agreement included a commitment to principles of democracy, national unity, pluralism, power sharing. With regard to national unity and power-sharing, the agreement mandated the Hutus and Tutsis (that is, the warring parties) to establish a government of unity with one and single national army and police forces as well as to find a definitive solution to the problem of Rwandan refugees.

“It is believed that the 1994 assassinations of these two Hutu presidents put an end to implementation of the 1993 agreement, triggered the Rwandan genocide, and facilitated the establishment of the Tutsi supremacy in Rwanda and in the region.”

The letter asserts Uganda President Yoweri Museveni is the architect of the project.

“It is trite to state that the social, economic, and political unrest that the Great Lakes region is currently facing is embedded in the brainchild of President Yoweri Kaguta Museveni to create the Hima-Tutsi Empire with himself as the First Emperor. He shared this view with President Kagame, former President Pierre Boyoya of Burundi and former President Jean Batiste Bagaza of Burundi. The Tutsi soldiers from Burundi were clandestinely deployed to cause havoc in the DRC, as they also fought alongside the RPF to depose Maj Gen Habyarimana regime,” it says.

“Like President Kagame, Museveni’s military and political intervention in Rwanda, Burundi, and the DRC is all about the establishment of Tutsi-Hima Empire. This project is not only too ambitious, but also very dangerous as it threatens all the Bantu families and nations. On 4 April 1997, Museveni stated that “[his] mission [was] to see that Eritrea, Ethiopia, Sudan, Uganda, Kenya, Tanzania, Rwanda, Burundi and [the DRC would] become federal states under one nation [and one leader].”

This testimony was provided by Mr Eric Kashambuzi, Secretary General and Chief Administrator of the United Democratic Ugandans (UDU), who further underlined that war for the control of the [DRC] and illegal exploitation of its minerals began in Uganda in the 1980s, when President Museveni shot his way to power with the backing of western powers.

These testimonies suggest that the insecurity and instability problems in Rwanda, Burundi and the DRC is not about Hutus and Tutsi, but the struggle to conquer all Bantu nations. This is the reason why the violence spills over to other countries such as Mozambique.”

How it all started

The refugee leaders say Museveni was the architect of the ethnic supremacy agenda.

“On that note, one should recall that the combatants of the RPF were the same soldiers of the Museveni’s National Resistance Army (NRA). Actually, the Tutsi refugees in Uganda joined the NRA, which fought a guerrilla war called the “Ugandan Bush War” against the government of Milton Obote. It was here that they first fought and mastered a guerrilla or bush war,” the letter says.

“These Tutsi combatants include Maj-Gen Fred Gisa Rwigyema, President Paul Kagame, Gen. James Kabarebe, Col. Patrick Karegeya and Lt.-Gen. Kayumba Nyamwasa. After deposing Milton Obote regime, Maj-Gen Rwigyema became the Minister of Defence whereas Kagame became Chief of Intelligence. With the assistance of Museveni, Maj-Gen Rwigyema founded the RPF and became its first Commander-in-Chief. He died on the second day of invasion of Rwanda and was substituted by President Kagame.”

The letter says when Kagame took over, he went on seized power and is implementing the ethnic hegemony project ruthlessly, as he spreads his political wings and influence into the Sadc region, which includes Zimbabwe, which also hosts a number of Rwandan refugees.

The letter says Rwanda’s campaign in Mozambique is coordinated by the country’s ambassador Claude Nikobisanzwe who was based in South Africa until 2014. It says on this and other basis, it is an “insult” to call Kagame a progressive leader.

From unbundling back to re-bundling: Zesa undergoes massive restructuring