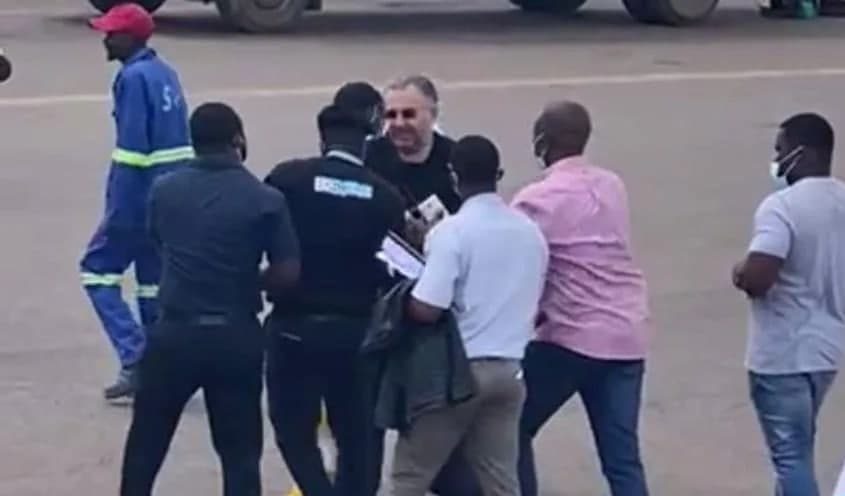 The sources said Zingman’s arrest threatens to open a can worms, with Mnangagwa perilously in the eye of the storm.

The Belarusian tycoon’s whereabouts remain unknown since his arrest. He was seized together with his colleague Oleg Vodchits and their Italian business associate Paolo Persico.

Executives at his company AFTRADE in the Belarusian capital Minsk and Dubai are frantically searching for Zingman, Zimbabwe’s Honorary Consul in Belarus.

Some of Zingman’s friends met at his Falcone restaurant in Minsk, a source said.

“We are deeply concerned by Alexander Zingman being unlawfully detained in the DRC. He was in the country on a legitimate business trip for generating agricultural trade with our partners in Africa,” a company spokesman told The NewsHawks.

“We call (upon) DRC authorities to release Mr Zingman, his colleague Oleg Vodchits, and their Italian associate Paolo Persico immediately. To detain Western businessmen on a business visit is not helpful for our efforts to promote trade with Africa.”

The source of the problem is the deadly political fight raging on in the DRC between President Felix Tshisekedi and Kabila.

The two had a governing coalition after the 2018 elections which collapsed recently, with Tshisekedi seizing control of parliament and purging Kabila’s allies.

Mnangagwa and Zingman are caught up in the messy DRC conflict.

However, Mnangagwa remains a pillar of support for Kabila and Zimbabwe is a refuge for his allies. Several DRC rebel commanders, including Protais Mpiranya, a former presidential guard chief who is wanted for war crimes, are hiding in Zimbabwe.

Only this week, General John Numbi, former police and army chief, suspected of having ordered the assassination of two people, fled to Zimbabwe. For a long time, Numbi — one of the most prominent generals in the Congolese army who has been placed under international sanctions and is very close to Kabila — had been holed up on his farm in Lubumbashi in south-eastern DRC.

Kabila has also retreated to his farm to strategise on how to fight Tshisekedi.

While Mnangagwa is close to Kabila, Kagame is a Tshisekedi ally. At the same time, Mnangagwa and Kagame have good relations.

Zimbabwe and Rwanda just recently signed five memoranda of understanding to establish a joint permanent commission on co-operation and a series of other agreements, including on criminal matters, showing strengthening ties between Mnangagwa and Kagame.

Yet Kabila wants Mnangagwa to help him against Tshisekedi, who is backed by Kagame.

This means if Mnangagwa helps out Tshisekedi, he will inevitably clash with Kagame, in what would be another violent confrontation similar to the bloody Second DRC War.

Tshisekedi, backed by the Kigali strongman, has fired the first warning shots across Kabila’s bows by arresting Zingman, his ally, and Mnangagwa’s associate. He is also after Numbi, now hiding in Zimbabwe.

The murky Belarusian oligarch, who on the surface is a lowkey businessman who runs his mining and agricultural company from Minsk and Dubai, has a vast network of contacts in Africa running from north, to the west, east and southern Africa.

He hobnobs with presidents and their cronies, purportedly selling mining and agricultural equipment.

Zingman was at the centre of Zimbabwe’s US$58 million agricultural equipment deal with Belarus in 2019 and a comprehensive US$350 million trade arrangement between the two countries.

Mnangagwa is close to Zingman, Belarus’ longtime authoritarian leader Alexander Lukashenko’s runner and his fixer Victor Sheiman. Both Zingman and Sheiman have been to Zimbabwe several times to meet Mnangagwa and his officials. The two are linked to Russian arms dealing in Africa and elsewhere.

Mnangagwa has on several occasions been publicly photographed with Zingman, one time at his Harare home with his son Emmerson Junior, with his wife Auxillia’s portrait right in front of them.

The three were sitting in a comfortable and cosy posture, discussing what would certainly have included private business.

In the DRC, Mnangagwa remains close to Kabila. The two worked closely together during the second DRC war from 1998 to 2002. Zimbabwe was, together with many other countries, involved in the war.

Zimbabwean political and military leaders cut diamond deals in the Congo. Stories of bags full of money changing hands during the time were commonplace.

Mnangagwa and Kabila dealt with each other on various issues, including official deals under the aegis of Zimbabwe’s moribund Osleg military company, and have remained close.

A 2002 UN Security Council report cites Mnangagwa, who is on American sanctions, as part of an elite network of DRC and Zimbabwean officials who pillaged Congolese minerals.

Kabila met Mnangagwa on 2 March in Harare to discuss the political and security situation in the DRC. He visited Zimbabwe at the end of a tour that took him to Abu Dhabi, United Arab Emirates, and Dar es Salaam, Tanzania. During his stopover in Harare, Kabila had dinner with Mnangagwa.

Zingman was arrested while on his way from Lubumbashi to meet Mnangagwa. He had met Kabila just before that. This was barely two weeks after Kabila visited Harare to see Mnangagwa amid rising tensions in the Great Lakes region. Kabila’s visit was exclusively covered by The NewsHawks.

Besides being Kabila’s ally, Mnangagwa is part of the Sadc troika on politics, defence and security, together with Botswana President Mokgweetsi Masisi and his South African counterpart Cyril Ramaphosa. Mozambican President Filipe Nyusi is the Sadc chair.

“The issue is about politics, mineral deals and guns,” a security source told The NewsHawks.

Tshisekedi and Kabika have had a serious fallout after the collapse of the coalition between Heading for Change and the Common Front for Congo since the 2018 disputed elections. Kabila’s coalition controlled parliament. However, Tshisekedi is now purging Kabila allies.

Tshisekedi has in recent months been purging Kabila’s political allies — including Prime minister Sylvestre Ilunga Ilunkumba — removed through a vote of no confidence, leading to a collapse of the power-sharing arrangement.

In a bid to sideline Kabila, the DRC Parliament supported Christophe Mboso, who had defected from the former president’s Common Front for Congo party in December to rally behind Tshisekedi.

This followed the ousting of former speaker Jeanine Mabunda, another Kabila ally, recently and the resignation of Ilunkamba. Kabila’s other ally, Alexis Thambwe Mwamba, was also removed as Senate President. This then gave Tshisekedi control of the House of Assembly and Senate, leaving Kabila angry.

Residing since late December at his farm in Kashamata, Kabila is said to have been refining his strategy to counter Tshisekedi’s manoeuvres to consolidate control and push him out.

From Lubumbashi, in Haut-Katanga, Kabila has conducted a series of consultations on the fightback. Kabila has written to the African Union and United Nations, and has dispatched envoys to South Africa, Egypt and Kenya, among other countries. That is why he met Mnangagwa in Harare.

Zingman was coming to see Mnangagwa after his meeting with Kabila to discuss mining deals, how to help the former DRC leader fight Tshisekedi and resources needed, as well as the implications.

The situation is further complicated by Rwanda, which faces an existential threat from former Hutu army troops and commanders who retreated into eastern DRC after the 1994 genocide and the rise of President Paul Kagame. The Hutu forces have been attacking the country since then.

The assassination on 6 April 1994 of President Juvénal Habyarimana, a Hutu, sparked a genocidal wave which left 800 000 Tutsis and moderate Hutus dead.

Kagame gained control of the capital Kigali and most of Rwanda by July-August 1994. By that time, an estimated 1.7 million Rwandan Hutus had fled to Zaire (renamed DRC in 1997), Tanzania, and other countries.

An estimated 34 000 to 37 000 members of the former army, presidential guard led by Protais Mpiranya, gendarmerie, and Interahamwe, along with hundreds of thousands of Rwandan refugees, formed part of the exodus. Most of them gathered in two eastern provinces: 20 000 fighters and 850 000 refugees in Goma, North Kivu, and 5 000 to 7 000 fighters and 332 000 refugees in Bukavu, South Kivu.

So a large part of the former Rwandan state security apparatus went into exile in the DRC, where they built a quasi-state run by their “government in exile”.

The Hutu rebels exploited Rwandan refugees and local resources, taking advantage of the weakness of local authorities to consolidate their strength in these remote regions.

For the rebel leaders, these refugees would become human shields, a pool for recruitment, and a source of income and political legitimacy.

In late 1996, the Rwandan government, working with its allies Burundi and Uganda, responded to the cross-border attacks by supporting the Alliance of Democratic Forces for the Liberation of Congo, an alliance of Congolese rebel groups led by Laurent-Désiré Kabila that later toppled Zairean dictator Mobutu Sese Seko in May 1997.

As Kabila sought to free himself from Rwandan control, a new Congolese rebellion erupted under the Congolese Rally for Democracy, leading to the Second Congolese War of 1998–2002.

In a dramatic shift, Kabila, supported by Angola, Chad, Namibia, and Zimbabwe, allied himself with Hutu armies and the Interahamwe militia, Rwandan and Ugandan-backed rebels.

Joseph Kabila, who took over after his father was assassinated, inherited the hostilities with Rwanda.

This partly is the source of problems between Kabila and Kagame. Tshisekedi is trying to fix the problem with Kagame now.

Last year, a picture of Kagame and Tshisekedi firmly holding hands at a meeting in Kigali went viral and sent tongues wagging in DRC where the anti-Rwandese sentiment remains strong.

Representatives of Rwanda’s and DRC’s defence and security forces met recently in Kinshasa, and made several important decisions on cooperation in eastern DRC.

During the meeting, which took place from 15 March to 19 March, François Beya – “Mr Security” for Tshisekedi – and Jean Bosco Kazura, Rwanda Defence Force Chief-of-Staff, reviewed the previous meeting. They had earlier met from 12 February to 14 February in Kigali, with other security officials, to develop a joint strategy to address security-related issues.

The teams, on behalf of Tshisekedi and Kagame, drew up an operational plan to carry out joint military actions against rebel groups operating in eastern DRC.

These include the Hutu-led Democratic Forces for the Liberation of Rwanda, whose commander Slyvestre Mudacumura was killed in 2019, and its splinter groups, the National Council for Renewal and Democracy and Rally for Unity and Democracy-Urunana, and the March 23 Movement.

Like many Rwandese Hutu rebel commanders based in the DRC, Mudacumura was wanted for war crimes. Beya and Kazura decided to reinforce surveillance measures at the border. Tshisekedi received the military and security officials of both delegations for a briefing.

The United Nations says Rwanda and Burundi are conducting military operations in the east, accusations both Kigali and Gitega (Burundi’s capital) deny.