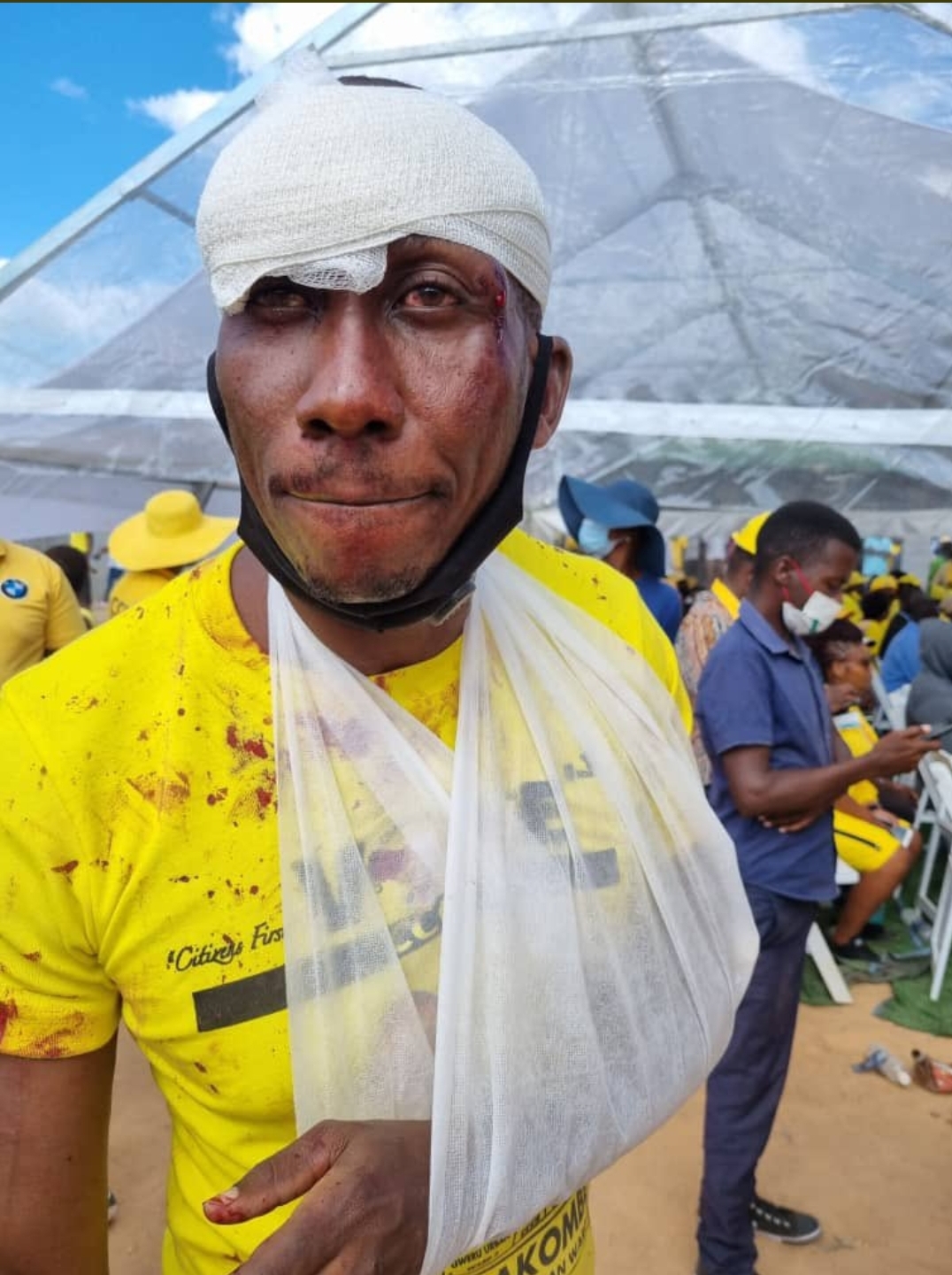 ON 26 February, Zimbabwe’s Vice-President, Constantino Chiwenga, warned the Citizens’ Coalition for Change (CCC) and its leader, Nelson Chamisa, that Zanu-PF will crush the party like lice.

He told a Zanu-PF rally in Kwekwe: “Let me assure you that there is nothing that it [CCC] can achieve; you see how we crush lice with a stone. You put it on a flat stone and then flatten it to the extent that even flies will not make a meal out of it.”

As he spoke, CCC supporters were tear-gassed by the police to prevent them holding a rally at Gokwe centre.

On 27 February, a machete-wielding gang stabbed to death Mboneni Ncube (35), and seriously injured 22 other people in a bid to prevent people from attending a CCC rally in Kwekwe.

“The government’s rhetoric has done much to incite such ferocious violence and little to ensure the free exercise of the rights to freedom of assembly and association,” said Muleya Mwananyanda, Amnesty International’s deputy director for southern Africa.

“This assault bears all the hallmarks of a premeditated attack that aims to intimidate political opposition and block access to their constituents ahead of the upcoming by-elections in March.”

In March 2020, electoral activities were suspended under the guise of Covid-19 regulations, which have been used to undermine the rule of law, control political behaviour and curtail citizens’ constitutionally mandated freedoms.

On 26 March, Zimbabwe will hold the first by-elections in a year to fill 133 vacancies. These vacancies comprise 28 parliamentary seats and 105 council seats emanating from recalls, deaths and dismissals.

Ahead of next year’s national elections, these by-elections are a harbinger of things to come. They provide insights into how Zanu-PF will work to guarantee its victory through the use of co-optation, intimidation and vote rigging, and whether the CCC will be able to adapt and navigate this fraught political landscape.

On 31 March 2020, Zimbabwe’s supreme court ruled in favour of Douglas Mwonzora to lead the Movement for Democratic Change (MDC). The ruling was widely viewed as a move by the Zanu-PF government to destroy legitimate political opposition, while co-opting pliant members in the movement.

Devoid of any public mandate, Mwonzora suddenly had access to the political party finances, the Harvest House offices, the power to recall legislators and even to appropriate the name Movement for Democratic Change-Alliance.

These actions by the Zanu-PF government were reminiscent of those taken by the Ian Smith regime in 1978, where a pliant wing of the nationalist movement was co-opted into the internal settlement arrangement.

Today, Zanu-PF can boast of a “loyal opposition” wing, courtesy of the supreme court’s judicial endorsement. Until 24 January this year, the Chamisa-led opposition movement seemed all but dead and buried.

But, in just over a month since its launch on 24 January, the CCC has overhauled the Zimbabwean electoral environment. The intended effect of the March 2020 supreme court ruling was designed to sign over the MDC-Alliance’s 2018 base of 2 147 436 voters, constituting 44.3% of the electorate, but seems to have come to naught.

Events in the past two weeks have confirmed that legitimate opposition is far from defeated. The CCC has seen a wave of public support, with citizens turning out in their thousands at its rallies. In contrast, rallies by Mwonzora’s MDC have seen poor attendance numbers.

The Political Actors Dialogue, which was created by President Emmerson Mnangagwa after the 2018 elections, ostensibly to encourage discussions between the president and his political opponents about how to move the country out of political and economic crisis, has been widely criticised as a tool to further divide and co-opt opposition parties.

Professor Brian Raftopoulos, a leading Zimbabwean scholar and activist, said: “I think the emergence of the Citizens’ Coalition for Change is going to face major challenges … it’s remarkable that they have survived this major onslaught of the state … because the state has really gone at them through the judiciary, through violence, through attacks on their alliances … and so, they have had to really fight this battle on a terrain which is disadvantageous to them”.

Reaction by the Zimbabwe Republic Police to the CCC rallies ahead of the March by-elections demonstrates how state security institutions continue to be manipulated in service to the current ruling party, with several incidents of violence and coercion being reported. The police placed unusually stringent conditions to the CCC’s maiden # yellow Sunday Star rally held on 20 February. The conditions included orders against “bussing in of people from other constituencies” and “chanting slogans and singing and disseminating hateful and defaming information”. No such restrictions are placed on Mwonzora’s MDC rallies held earlier.

On 26 February, reports of police violence against CCC supporters arose after a rally scheduled for Gokwe, a rural district in Zimbabwe’s Midlands province, the political home of Mnangagwa. Despite the CCC having been given the green light by the high court, the police shut down the rally.

In another CCC rally held in the same province, in Kwekwe, suspected Zanu-PF youths disrupted the rally, leaving one person dead.

Despite these onslaughts, the CCC supporters seem determined to continue exercising their rights, enduring the known risk of state violence and police brutality to place their seal of approval on what they believe is a better alternative to Zanu-PF rule.

This substantial support places a huge responsibility on the CCC.

Apart from remaining vigilant in the face of continuing attacks, Raftopoulos has cautioned the CCC to “take a critical look at how it got to this place in the first place … not only through the state actions but also through bad decisions internally … which date back to the year 2005 split”.

Clearly, all democratically inspired movements in Zimbabwe face a huge task in entrenching a new culture of political engagement and advancing good governance. They must exercise sincerity in fighting the culture of violence and corruption, cultures which, over the years, have become a defining feature of the country’s politics.

They must also promote inclusivity and unity, and strive to build strong alliances across business, civil society and religious sectors. Citizens must be united around broad, progressive concerns aimed at moving the country towards a truly democratic, better governed future.

The 26 March by-election is no ordinary by-election and, after a failed effort to dismantle the main opposition, the stakes are higher than ever for all the major parties. A new wave of energy has taken over Zimbabwe’s electoral space, transforming the by-election from what had begun to feel like a bland process to a highly contested one.

It is incumbent upon the state, in the build-up to election day, to uphold citizens’ freedoms of speech, assembly and participation in a free, fair and credible by-election. The electorate must be enabled the exercise of their political choices without violence and intimidation. Unless the state exercises restraint and upholds the electorate’s and all parties’ constitutionally mandated political rights, as espoused in section 67 of Zimbabwe’s Constitution, it could be a long and bloody walk to March 26 — a discouraging picture of the political road ahead between now and next year’s general election.–Good Governance Africa.

About the writer: Sikhululekile Mashingaidze started off as a part-time enumerator for the Mass Public Opinion Institute. She has worked with Habakkuk Trust, Centre for Conflict Resolution (CCR-Kenya), Mercy Corps Zimbabwe and Action Aid International Zimbabwe.

There is no illegal human being: Undocumented immigrants targeted