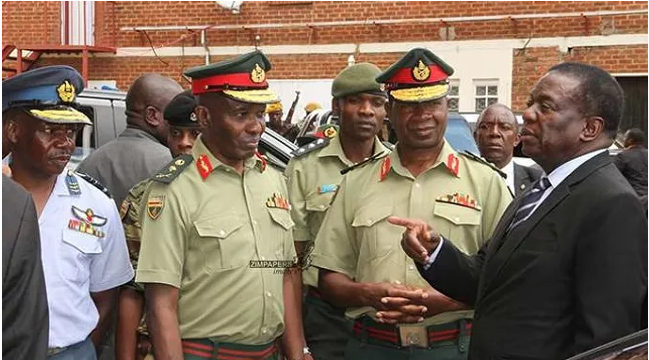 The military coup of November 15, 2017, in Zimbabwe, which the protagonists who carried it out euphemistically call Operation Restore Legacy (ORL) was an ultimate power play between two competing factions within Zanu-PF, the military-backed Lacoste faction and the pro-Mugabe Generation 40 faction.

It was an operation by the army, not to rescue the country from a grinding economic decline, but a means to perpetuate the fall, for the benefit of the military elite who have always made it their business to feast on the economic carcass as long as it still could satisfy their vulture appetites.

While the then Commander of the Zimbabwe Defence Forces (CDF), General Constantino Chiwenga and the coup announcer, then Brigadier General, Sibusiso Moyo, spoke about the coup as an operation to arrest “criminals around the president,” who were allegedly responsible for the economic downturn the country was experiencing, the “Summary of the main issues and concerns of the command element” which they communicated to then-President, Robert Mugabe, on 15th and 16th November 2017 speak of totally different motivations for the coup.

The document, which the soldiers and civil servants who supported them in planning and executing the coup, drew up, offers an insight into why the coup was carried out, what the soldiers and their accomplices termed the “Rationale for Operation Restore Legacy”.

The coup planners argue that the coup was “meant to prop the authority of the President (Mugabe) and buttress his constitutional roles in running the affairs of both the party, Zanu-PF, and the nation of Zimbabwe.” This is the first lie they told Mugabe. Events which followed have shown the coup was meant to topple Mugabe and replace him with a military-appointed leader, Emmerson Mnangagwa, who went on to form a government full of military personnel.

The coup planners also told Mugabe that the military action was precipitated by the “methodical subversion” by the G40 faction, of Zanu-PF “hierarchy, processes, procedures and values, all in ways that divided and destabilised Zanu-PF from within.” It is therefore clear that the military intervened in an internal political party dispute in contravention of section 211, 212 and 213 of the 2013 constitution, which demands that the Zimbabwe Defence Forces “be non-partisan, national in character, patriotic, professional and subordinate to civilian authority.”

By deploying themselves into the streets of Harare to fight for a faction of Zanu-PF, the army contravened the constitution, acted in a partisan and non-patriotic way which has had dire consequences to the smooth running of the country three years after the coup. Their actions undermined the “civilian authority” established by the constitution and the result has been a military and extractive regime that has no regard for human rights, economic welfare of the people and the general services that make a life for citizens both enjoyable and secure to live.

The soldiers, we have now come to understand from the coup minutes, embarked on their operation to remove Mugabe and his G40 as a way of dealing with the threat posed on Zanu-PF’s “electability in the impending 2018 harmonized elections”, by the G40 group which the army believed had taken over the party but was likely to lose the 2018 elections.

The coup conspirators believed the takeover of Zanu-PF by G40 was “raising the spectre of an electoral defeat which harkened to the 2008 electoral crisis” thus they had to rescue Zanu-PF from, both G40 and an imminent electoral loss in 2018. One might argue here that the military operation managed to achieve both. The military took over Zanu-PF through Operation Restore Legacy and rigged the elections to avoid a Zanu-PF electoral loss to the MDC-Alliance in 2018. At that level, it was mission accomplished.

The question, however, arises, as to what benefit was the coup to the country? What positive dividend did the country derive from the army intervening in an internal Zanu-PF dispute which was centred on Mugabe’s succession?

It is my submission here that the country benefitted nothing, instead, it lost everything. The people lost control of both state and government. The state was taken over by a looting cabal with guns to protect their loot.

Since the military operation was never about service delivery to the common citizen or ridding the country of “criminals” who had surrounded the presidency, the “new dispensation” ushered in by the coup introduced shameless thieves into the state and government and has pursued a looting agenda that has not only made Mugabe look like a saint, but has decimated any hope Zimbabweans of someone turning around the fortunes of the country.

What tells us that Operation Restore Legacy was about power not delivery is the extraordinary concentration of corrupt and incompetent clansmen around the current president. And if they were competent people or almost competent people it would be one thing. But they are not only incompetent; they are also corrupt to the core.

Operation Restore Legacy has perfected the Rhodesian clientele state but with black faces. The commandist stare is now hardened. The small extractive elite is even greedier, to the point of willingly colluding with international criminals in looting the country. The Henrietta Rushwaya gold smuggling and the Delish Nguwaya Drax Covid-19 tender scandals stick out like sore thumbs. They represent all that is bad about Mnangagwa’s military government.

The military cabal’s relationship with voters remains purely transactional: voters exist to give a cover or fig leaf of legitimacy but their welfare is not at the heart of government in any meaningful way. August 1, 2018, the shooting of civilians demonstrating against the delayed announcement of election results is instructive and the closure of hospitals in the midst of a global pandemic epitomises the disregard for human life with which the military cabal goes about its business.

Nothing boggles the mind worse than the fact that, despite the Covid-19 challenges, the military cabal in Harare has chosen to close hospitals when everywhere in the world, governments are fighting hard, not only to equip their existing medical facilities but to build new ones in record times.

While the whole world, governments are strengthening their health response systems, the military cabal in Zimbabwe is firing medical personnel and closing the few hospitals we inherited from the colonial state. If there was any doubt about how uncaring the military cabal is towards the country’s citizens, its response to Covid-19 removed that doubt.

It is now very clear that Operation Restore Legacy was, and remains, a power contest for the heart and soul of Zanu-PF, nothing about the welfare of our people. That, despite the army seemingly emerging victorious against Mugabe and G40, the Zanu-PF power contest is far from over, shows that only power is important and preoccupies the military cabal. It is all about power. This is why there is still contestation among the same people who coalesced against Mugabe, they no longer trust each other. It would not be at all surprising if Chiwenga made the same speech about Mnangagwa today that he made about Mugabe on November 13 2017.

Because Operation Restore Legacy was never a legitimate response to Zimbabwe’s concerns, one might look at the country’s situation today vis-à-vis human rights, women inclusion in decision-making positions, the welfare of civil servants like teachers, nurses, doctors, tertiary colleges lecturers, police officers and even the rank and file in the army. Everyone is poorer than they were three years ago. More and more are getting despondent but the threat of military force being used on any dissenting voice has made almost everyone hapless, hence the high rise in suicides, heart attacks and cases of sudden death among citizens.

It is now undeniable that Operation Restore Legacy was a military move to create looting opportunities for the men behind the coup, jobs for the boys, no wonder why we have a government full of men, mostly of Karanga extraction, Mnangagwa’s clansmen that he is rewarding for supporting his power bid in Zanu-PF. We have never, at any time in our history, had so many qualified women who could be in government and yet there have never been so few women at top levels of leadership in government- it is jobs for the boys, to protect corrupt networks and for everyone else, it is suffer continue.

This article was first published in the latest Zimbabwe Briefing, a monthly report compiled by the Crisis in Zimbabwe Coalition