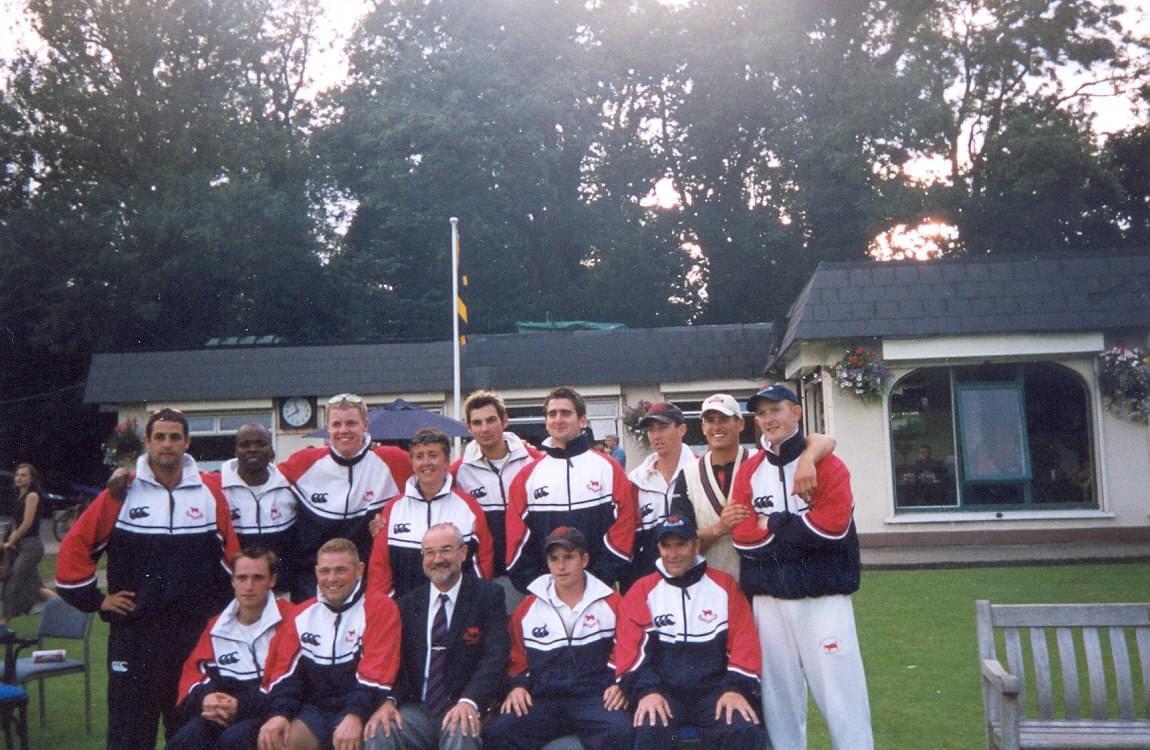 Patrick Gada (second from left, back row) with Irish club Clontarf in the 2002-03 season. Ex-Ireland internationals Alex Cusack, Greg Molins and Marthinus Fourie are also in the picture.

ZIMBABWE and Ireland have many similarities and the major one is that they both lack a large pool of high-quality players, or players of the highest calibre.

This results in them relying on a small group of players to form their core across all three cricketing formats.
For Ireland, one could say it is so because they are still developing as a top-cricketing nation.

For Zimbabwe, it can be argued that the standards of cricket have fallen drastically since the early 2000s due to various political reasons.

Looking at the most recent white-ball cricket performances and statistics, Zimbabwe showed glimpses of improvement especially with the bat when they played Bangladesh at home.

In three T20I matches, they managed scores of 150-plus runs against a decent Bangladesh attack. This was mainly led by the good performances of Wessly Madhevere opening the batting, and Regis Chakabva batting at number three.

They both made great use of the first power-fielding restrictions by playing good, sensible, attacking cricket.

Chakabva has been around international cricket for a long time, and it was good to see him being given more responsibility up the order as Zimbabwe has struggled to find good consistent openers in limited-overs cricket in the last 15 to 20 years. I have always felt that Chakabva is one of the best and most talented batsmen in Zimbabwe. He is someone I also know well since he was very young and upcoming around 2000-01.

As for Madhevere, having failed dismally against Afghanistan and Pakistan in previous series, Zimbabwe’s exciting prodigy played with good confidence and timing against Bangladesh, for someone who is not a powerful hitter of the ball.

The major weakness for Zimbabwe was in the middle to lower order. After positive starts, they were consistently pegged back by the Bangladesh bowlers, with most work left to Ryan Burl in trying to put up imposing totals for the hosts.

Ireland do have a similar problem, and I will cover some of that in this article.

But back to Burl for now. The left-hander has done very well and he needs to be given a longer run by Zimbabwe in white-ball cricket.

He can be a powerful and clean striker of the ball, although he tends to sometimes play across the line of the ball, using a bottom-hand heavy-grip and swing, whilst aiming to hit power shots between mid-on and the square boundary.

To strengthen their batting, Zimbabwe welcome the return of Brendan Taylor, Sean Williams and Craig Ervine – with Sikandar Raza having returned against Bangladesh following his own lengthy lay-off.

These Zimbabwe “Big Four” batters have missed out on matches in recent times due to illness and injury. These guys are the key men for the Zimbabweans: they will be required to bring their ‘A’ game if the African tourists are to win any matches, or series, in Ireland.

They all have experience of having toured Ireland before, and they will need to pass the knowledge to the inexperienced players in the Zimbabwe side.

For Zimbabwe to post good totals, these four players will be responsible to bat well between overs number seven to 15 in the T20s, as they are all good timers of a cricket call, all with ability to push the ball around and put the bad delivery away.

Burl will then hopefully come in to muscle the ball away in the last five to seven overs. But he cannot do it alone. He will need assistance from someone, but we know that Zimbabwe lack power-hitters in their squad.

Taylor and Williams will be key, as they can play spin bowling as well.

But they will need to do it against an ever-improving Irish spin-attack led by the dangerous Simi Singh (an all-rounder who recently scored an ODI century against South Africa), and Andrew McBrine.

The latter did not feature in the T20 matches that Ireland played against South Africa, but he is a gusty cricketer and a good fielder.

The Irish may consider playing him in most, if not all of the white-ball matches against Zimbabwe, especially if they intend not to utilise George Dockrell in the T20 format.

The other batters Zimbabwe will look to rely on – or give a chance – include Tarisai Musakanda, Milton Shumba, Tadiwanashe Marumani and Dion Myers.

They are all still very inexperienced, and still learning how to score runs at international level. They individually still have some technical flaws that need to be ironed out.

With the Zimbabwean domestic cricket set-up not as organised and competitive as it should be, and the national side itself not playing a lot of cricket, the players have been deprived of the opportunity to reach full potential.

Some of the emerging Zimbabwe players are having to learn new, or basic skills, at international level. These must be learnt and mastered at club or first-class level.

For Zimbabwe, the pace bowling attack will be led by the world-class talents of Blessing Muzarabani.

Blessing, who I spent a lot of time with during his County Championship stint with Northamptonshire here in the UK, has been bowling well since his return to international cricket.

He has shown good variations and made use of slower balls, as well as hitting good lengths and lines. His battle with the attacking world-class Irish batter Paul Stirling will be critical.

There is also the hard-hitting Kevin O’Brien, who will most likely open the batting for Ireland in the T20 series.

Zimbabwe will need to bowl tight to him early on and hope that O’Brien and Sterling do not get the Irish off to flying starts.

The hosts will also be hoping that their experienced former captain William Porterfield can get some much-needed runs.

Zimbabwe will also look up to seamer Tendai Chatara, who has not done badly since his return from injury. The major weakness for Zimbabwe, though, is the back-up bowling.

The other pace bowlers – Luke Jongwe, Donald Tiripano, Richard Nagarava and Dion Myers – have been expensive.

They have lacked control and have not bowled accurately and skilfully enough. Zimbabwe have also been bowling too many extras including wides and no-balls.

In one T20 match against Bangladesh, they bowled up to 18 extras! They will need to avoid such nursery school mistakes against the Irish team.

On a positive side, spinner Wellington Masakadza did bowl well against Bangladesh and hopefully he will carry on against Ireland and Scotland (Zimbabwe heads to Scotland from Ireland).

Bowling will be the most critical in both the ODI and T20 series in Ireland.

Compared to Zimbabwe, Ireland have more depth in both their pace and spin-bowling attack, as well as combinations to choose from. Joshua Little has been bowling with good pace and accuracy.

Craig Young has also been swinging the ball at good pace. Mark Adair and Barry McCarthy have done well in the past and against Zimbabwe.

Shane Getkate is another bowler they can call upon. George Dockrell is still a good, experienced spinner and his batting has shown some improvement in recent months.

Ireland may need to use him more against Zimbabwe.

The Irish batting revolves around a few individuals – mainly Stirling and captain Andy Balbirnie. If they fire, a big total could be posted.

They will need Curtis Campher to be fit, and for Harry Tucker to start showing more potential by putting more runs on the board.

However, comparing the two inexperienced and fragile batting line-ups, Ireland do have more depth compared to Zimbabwe especially if Singh and Adair are batting at number eight and nine respectively.

A long batting order can instil confidence and allow top or middle-order batters to be a bit more aggressive in their play.

The three ODIs in Ireland will be hugely important as they form part of the World Cup Super League, pathway to qualification for the World Cup next year.

But the five-match T20 contest between these two teams, which will come first, will be no less gripping.

There is a great African proverb that goes: “When elephants fight, it is the grass that suffers.” Another way to put it is that the powerless suffer the most when the powerful fight.

Well, the fight between Ireland and Zimbabwe is that of “two baby elephants” so the green grass of Ireland will certainly not suffer the most in this particular battle.

The cricketing world will be waiting to see which baby elephant has some potential to cause the most grass damage in future, and more potential for growth.

Zimbabwe should be happy to tour Ireland in August and September, which are the summer and autumn months in those parts.

The weather should be warm on many days. However, and as always, rain and cold temperatures should be expected from time to time in Ireland. More so in September when the tour moves to Scotland.

In September, as Zimbabweans will be coming from a warmer climate, one can start to feel or get little signals of the cold English winter which starts towards the end of November moving into December.

With this in mind, Zimbabwe should expect the ball to swing and seam. Also, playing the first two T20s at Clontarf CC – my old home ground in the Republic of Ireland in 2002-03 – the Zimbabweans will be received by a wicket with a small boundary on one end.

They will need to master how they can use the angles and best place their fielders.

I hope to visit Ireland or Scotland to watch Zimbabwe in action. However, the need for bio-secure bubbles that have emerged during the Covid-19 pandemic may deter me from travelling, as I would have loved to meet some of my long-time friends within the Zimbabwe team – both coaching staff and players.

I have not met many of them since 2007 when I last left Zimbabwe. Either way, rest assured I will be following play on all available media platforms.

I also have some good friends in Ireland who I would have loved to meet. I played Premier League cricket there and did a lot of coaching in clubs and schools between 2002 and 2004.

I have a couple of great Irish pals, including the current head groundsman at the famous Lords in London, Karl McDermott, who held a similar position when I played at Clontarf in Dublin in 2002-03.

Another great mate, former first-class player Deryck Vincent, has been involved in Irish domestic cricket for many years.

I will be thinking of these gentlemen, and I hope to be chatting with them during the course of the Ireland-Zimbabwe contest.

*About the writer: Patrick Gada is a former first-class cricketer from Zimbabwe who played Premier League cricket in Ireland between 2002 and 2004 when the game was still developing in that country. He has closely followed the progress of Irish cricket over the years. Gada lives in Nottingham, England, coaching at youth level and running a successful youth cricket hub for boys and girls. He writes this preview for The NewsHawks.

‘A gold medal made in Zim’

HawkZone: No harm in being optimistic, once again