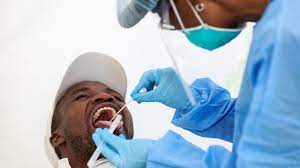 A STUDY conducted by The Lancet Microbe medical journal in March has shown that a Covid-19 variant first detected in Uganda was detected in Zimbabwe during the second wave of infections although official genome sequencing is yet to prove that.

The southern African country has in recent weeks been hit by a surge in new infections and mortality with expects blaming this on low adherence to World Health Organisation protocols. Before this, the government enforced a lockdown in January following a second wave of infections.

The research by The Lancet Microbe has shown that Zimbabwe has variants of concern.

According to the report, less than 5% (23 815 of 537 360) of public SARS-CoV-2 genomes are from low-income and middle-income countries, where 80% of the world’s population resides and has been similarly affected by Covid-19. The recent worldwide spread of variants of concern has highlighted the need for global vigilance.

“Prospective surveillance of SARS-CoV-2 by genome sequencing in Zimbabwe between December 2020, and January, 2021 (the period of the so-called second wave), has identified that variants with concerning mutations are prevalent in sequenced samples. In December 2020, 95 (89%) of 107 sequenced cases contained mutations of concern, rising to 102 (98%) of 104 in January 2021. The identified variants included the previously reported B.1.351 (501Y.V2) and A.23.1 variants, along with a novel variant under investigation (C.2),” the report says.

The B.1.1.7, B.1.525, P.1, and P.2 variants were not identified in Zimbabwe. Variants with concerning mutations have all replaced previously identified lineages in Zimbabwe.

Firstly, the B.1.351 variant of concern, originally identified in South Africa, accounted for 74 (69%) of 107 sequenced cases in December, 2020, and 99 (95%) of 104 sequenced cases in January, 2021. The population structure was consistent with multiple separate introductions. Zimbabwe is the second country other than South Africa to report B.1.351 as the dominant variant to date.”

As in other countries, this variant, the report further states, has been associated with increased transmissibility, resulting in overwhelmed healthcare systems and in higher mortality than the first wave.

“Secondly, the A.23.1 variant of concern, first reported in Uganda, was observed in 3 (3%) of 107 sequenced cases in December, but was not observed in 104 sequenced cases in January. Thirdly, a variant designated C.2 and containing a spike protein mutation (N501T) that was previously reported in another lineage of SARS-CoV-2 found in mink was present in Zimbabwe in both December 2020, and January 2021,” the report reads.

“In conclusion, variants with concerning mutations identified in December 2020, and January 2021, have replaced previously identified lineages in Zimbabwe. This observation highlights the importance of global surveillance by whole-genome sequencing of SARS-CoV-2 to identify sources and transmission routes, and to provide supporting evidence for policy decisions.”

Meanwhile, a study carried by the Ministry of Health has shown that 80% of Covid-19 cases which were reported in Zimbabwe after the Christmas holidays were linked to a variant first reported in South Africa.

According to research conducted by the country’s national Covid-19 coordinator, Dr Agnes Mahomva, Zimbabwe’s sequencing done during the second wave confirmed that the Beta variant accounted for 80% of the cases which were reported.

The ancestral variant, first reported in Wuhan, China, in 2019, the report showed, accounted for 20%.

Government races to shore up hospitals as Covid-19 surges