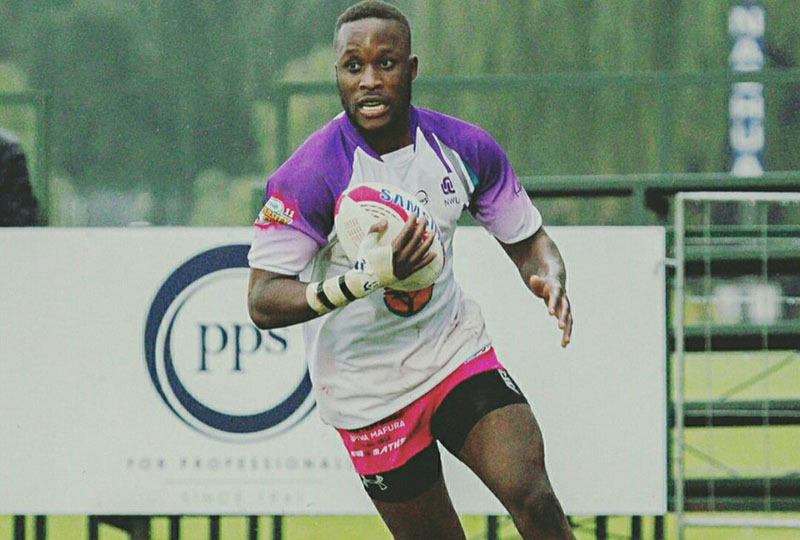 EXPLOSIVE Cheetahs utility back Tapiwa Mafura remains a prime target of Zimbabwe’s national rugby team as the country continue to reinforce its squad ahead of the beginning of World Cup qualifiers in July.

While South Africa-raised Mafura has officially been approached by the Zimbabwe Rugby Union (ZRU), it appears the lightning-quick former Varsity Cup star is leaving open the question of his international allegiance for now.

The 24-year-old Mafura was born in Harare and was groomed in the rugby system of South Africa, where he was schooled up to college level at North-West University in Potchefstroom.

Mafura’s regular position is fullback, but his blistering turn of pace and eye for gap makes him equally at home on the wing or outside-centre.

The Sables target has made a handful of appearances for Free State Cheetahs in South Africa’s premier domestic competition, the Currie Cup, and one in the Pro14 when the Bloemfontein-based outfit featured in Europe’s third major domestic competition in the 2019-20 season.

“We really would like him (Mafura) to join us,” Zimbabwe’s team manager Jason Maritz told The NewsHawks.

“We’ve given him our dream, our vision, what we are trying to achieve, and how we believe he can fit in the squad. I believe at this stage he is considering his options. So ja, hopefully he can come to join us alongside a few others we are in touch with. And, of cause, we are still busy with sponsors, there is certainly going to be some big news coming in terms of a title sponsor for the Sables. There will be a big announcement soon.”

Maritz, meanwhile, has revealed that Harare-born centre Brandon Mudzekenyedzi – who grew up in New Zealand – has made the decision to play for his country of birth after being impressed with Zimbabwe’s vision.

The 24-year-old robust centre, who has played for Waikato in New Zealand’s Mitre 10 Cup, arguably the strongest domestic competition in the world, can also acquit himself well at wing or full back like Mafura.

In addition to Mudzekenyedzi, two more players have also confirmed their availability if called up.

These are overseas-born Mungo Munro and Jason Robertson, who will qualify for the Sables because of their Zimbabwean roots. Both now play for the Old Glory club in the United States.

“Mungo is a flank who can also play as a wing, while Jason is a flyhalf,” explained Maritz. “We just need to figure out how it’s going to work because these two players will be in America. Will they be allowed to come to South Africa for a training camp and then go to Tunisia (for the first leg of World Cup qualifiers) and be allowed back into the US? I say so because currently there is a travel ban on people traveling to South Africa. It’s not easy times.”

The World Cup qualification competition for Africa begins in earnest in July with teams being grouped according to the world rankings of 2018.

Zimbabwe will travel to Tunisia to face the hosts and a repechage challenger, with the top two of the three sides proceeding to the final phase of World Cup qualifiers next year.

Two pools of four teams will then be set up next year, with the top two in each group going into the semi-finals and then a final, whose winner will qualify for the 2023 World Cup in France.

Zimbabwe is making its most spirited effort in years to qualify for the Rugby World, following the country’s last appearance in the tournament in 1991.

A wonderful opportunity to be branded a friend