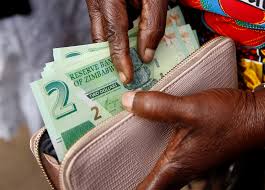 The economy is battling rising inflation, a weakening domestic currency and high levels of unemployment and experts warn that the situation may worsen.

At the height of the country’s unprecedented economic meltdown Zimbabwe’s inflation officially reached 231 million percent in 2007, rendering the domestic currency worthless. To halt the meltdown, the government ditched the Zimbabwe dollar for a basket of multi-currencies mainly dominated by the United States dollar.

“At the heart of the current challenges are two major recurring problems in macro-economic policy management over the past two decades: excessive monetary expansion; and a fixed/crawling peg exchange rate policy.

“The above combination has and will inherently guarantee high inflation (and hyperinflation, as occurred in 2008, if corrective measures are not implemented). The relationship between money, nominal and real variables has been well documented over the past decades, since Milton Friedman’s treatise in the 1960s.”

However, since August 2021, the economy has witnessed a resurgence in inflationary pressures with month-on-month inflation rising from 2.6% in July 2021 to 4.7% in September and 6.4% in October 2021.

“The signs of inflation build up have been evident since August 2021 (or more precisely renewed inflation pressure), as exacerbated by the sustained exchange rate depreciation,” Mverecha said.

Zimbabwe’s growth path over the past decade has been characterised by significant variability, with positive growth last year following consecutive decline in 2019 and 2020, with domestic growth constraints as compounded by the Covid-19 pandemic.

Related Topics:HyperinflationZimbabwe Economy
Up Next