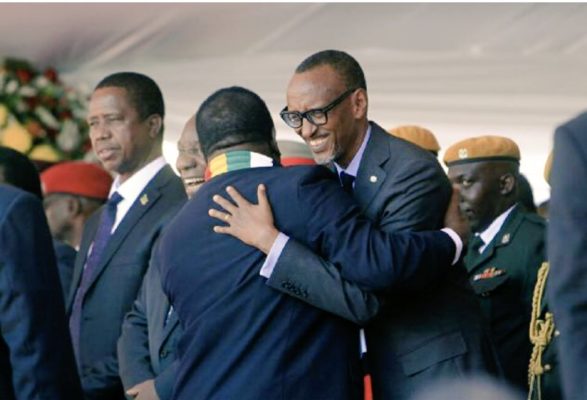 RELATIONS between Zimbabwe and Rwanda, which were strained during former president Robert Mugabe’s time in power culminating in the two sides fighting on opposite sides of the Democratic Republic of Congo war in the late 1990s to early 2000s, have improved under President Emmerson Mnangagwa, after being nudged onto the same path by the British government which wanted Harare to follow the Kigali economic model.

The two countries, which established a diplomatic relationship in October 2019 following consultations between Mnangagwa and his Rwandese counterpart Paul Kagame, in March held their inaugural Joint Permanent Commission on Cooperation.

This week, the two countries also held the inaugural Rwanda-Zimbabwe Trade and Investment Conference in Kigali, aimed at establishing a network for trade and investment interactions, promoting a market-led approach and ascertaining the trade and investment opportunities available in both countries.

Delegates visited key business establishments in Kigali, while the two countries signed memoranda of understanding in various fields of cooperation. Presentations and discussions on trade and investment opportunities were also held. Business-to-business sessions for both government and business executives were also held.

Zimbabwe commissioned an embassy building in Kigali on Wednesday as relations deepen.

After overthrowing Mugabe in a military coup in November 2017, Mnangagwa was eager to adopt Kagame’s economic development model which blends authoritarian practices and home-grown solutions with international best practice from developmental states in Asia.

The British government, through its ambassador to Zimbabwe at the time, Catriona Laing, supported the coup, and encouraged Mnangagwa to adopt the Rwandan model after losing faith in the opposition.

At the United Nations General Assembly meeting in New York in September 2018, Kagame, then the African Union (AU) chair, went out of his way to rally the international community and plead with them to give Mnangagwa a chance.

“In Zimbabwe . . . the next stage on the country’s path of progress warrants steady encouragement from the international community,” Kagame said in his address.

Kagame was one of the few African leaders who attended Mnangagwa’s inauguration in Harare on August 26.

Zimbabwe has now sought Rwanda’s assistance to be readmitted into the Commonwealth, which it left in 2003, as revealed by Foreign Affairs minister Frederick Shava this week.

Rwanda was earmarked to host the Commonwealth Heads of Government Meeting this year but the event has been postponed because of Covid-19.

Government officials say despite relations between Mnangagwa and the British government waning since the coup because of Harare’s failure to implement reforms as well as continued human rights abuses, relations with Rwanda remain strong.

Britain was hoping Harare would adopt a model based on strong leadership and high, sustained economic growths over years.

When Kagame took over the Rwandan leadership in 2000 following a devastating civil war and genocide in which almost a million minority Tutsis were killed by Hutus, the country moved to rehabilitate devastated infrastructure, while embarking on an ambitious development strategy to transform the country from a low-income agriculture-based economy to a knowledge-based service economy by 2020.

Since Mnangagwa first met Kagame as president on the sidelines of the AU extraordinary summit on 21 March 2018 in Kigali, the two have been working together.

After their meeting, Mnangagwa’s administration flew in Rwanda Development Board chair Clare Akamanzi in April 2018 to help in the process of establishing the Zimbabwe Investment and Development Agency.