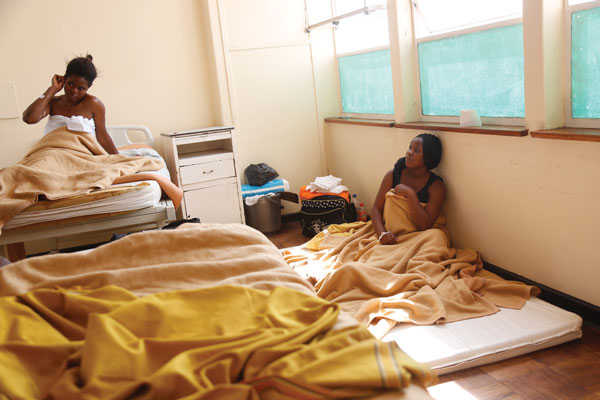 THE Zimbabwean government’s efforts to increase access to treatment for obstetric fistula risk being totally undermined, unless there is simultaneous action to prevent new cases.

Obstetric fistula is a medical condition in which a hole develops in a woman’s birth canal as a result of labour.

However, the escalating political and financial crisis since 2018 and the emergence of Covid-19 have jeopardised Zimbabwe’s healthcare system and undermined the fragile progress the country has made in improving maternal health outcomes over the past decade.

Zimbabwe’s maternal mortality ratio peaked in 2010 at 960 deaths per 100 000 live births – a steep rise from the rate of 283 in 1994 – as political and economic instability in Zimbabwe during the period 2000-2010 escalated household poverty levels and undermined the public health system.

Government spending on health per capita declined dramatically over the period, from the highest levels in sub-Saharan Africa at “US$42 in 1991…to just under US$6 in 2009.”

Analysis by Zimbabwe’s development partners indicates that by 2011 “maternal and child health were the most underfunded programmes in the health sector.” Health spending improved to US$57 per person in 2017, but was estimated to have sharply declined to US$21 in 2020, which puts the gains made by the country over the years at risk.

Since 2011, fragile gains have been made in relation to maternal health outcomes, with the assistance of international development partners. The country’s maternal mortality ratio declined to 462 per 100 000 live births in 2019. Key interventions have increased access to contraception, skilled birth attendants, and antenatal and postnatal care.

However, Zimbabwe’s development partners have emphasised that the country’s prospects of improving health outcomes rely on the country’s “economic recovery and political stability” – conditions which remain elusive.

In March 2019, Finance Minister failed to secure US$1.2 billion in emergency loans from South Africa, necessary to bolster economic growth and infrastructure investment.

Meanwhile, the inflation rate has increased enormously since October 2018. Inflation rates spiralled further to reach 75.86% by April 2019 with annual inflation soaring to 176%.

In August 2019, the Finance minister announced the government would no longer report inflation figures. However, a month later, the IMF reported the country had the “highest inflation rate in the world”, at 300%.

Having barely recovered from the regional drought of 2017, and a state of emergency in response to a cholera outbreak in 2018, remote parts of the country were ravaged by Cyclone Idai in 2019.

The World Food Programme warned over a third of the population would face food insecurity at the peak of the lean season in 2019, estimating that “63% of people live below the poverty line.”

Women and girls in Zimbabwe are also disproportionately affected and bear the brunt of these recurrent shocks. Unemployment rates have been consistently high among women and young people, who also struggle to find money for school fees and health services.

Despite the urgent need to strengthen the health system and improve maternal health outcomes, the government of Zimbabwe has consistently failed to assign sufficient funding to the health sector.

The allocation to health in the 2020 budget represented just 10% of the total national budget, a minor increase from 9.3% the previous year.

The government has repeatedly failed to heed recommendations from UN Human Rights Treaty Bodies, and the Committee of the Rights of the Child in 2016 to “Substantially increase allocations in the areas of health, education and social services to adequate levels”. Allocations have never reached 15% of the annual budget, despite Zimbabwe’s commitments to fund health at this level, under the 2001 Abuja Declaration.

While Zimbabwe’s 2019 budget was billed as one of austerity, civil society analysis stressed the disproportionate impact on people living in poverty. The Community Working Group on Health have analysed the long-term underinvestment as a “clear sign of lack of political commitment in addressing problems in the health sector”.

The government’s inadequate public spending in the health sector has meant that the costs of health services are disproportionality paid for by the poor, as people who are ill and in need of care have to rely on high levels of “out of pocket” payments.

Soaring inflation has increased these costs, at a time when nearly two thirds of the population live below the poverty line.” In addition to already expensive fees for medical consultations and tests, patients are reportedly required to pay for medicines, sterile equipment and fuel for ambulances.

Such costs can range from tens to hundreds of dollars and are out of the reach of the majority of people in Zimbabwe, with potentially devastating impact for pregnant people.

Zimbabwe is heavily reliant on international assistance to fund maternal health programs. Since 2011, the Health Transition Fund and a joint UN initiative, the H4+, have driven significant initiatives including the training of midwives, the running costs of 1 500 rural health facilities and helped improve the “availability of essential drugs, vaccines and commodities”.

Over one hundred maternity waiting homes have been built across the country.

Since 2011, the government has also committed to provide free maternal and child health services at all public health facilities. While this initiative was initially also funded though the Health Transition Fund, many local authority clinics have continued to charge fees, citing the funding shortfalls from national government.

In one example from June 2019, the Harare City Council was reportedly raising maternity fees at local government clinics to ZW$120 (US$22.20), and consultation fees to ZW$50 (US$9.20). Women and girls who are unable to pay the clinic fees for maternal health care, go directly to public hospitals to give birth. As these hospitals fall under the administration of the national government, maternity fees are waived.

However, in 2019, hospital maternity units became severely overburdened, and were
described as so full, women and their new-born babies were forced to sleep on the floor.

The hospitals are referral centres, which should only be dealing with complicated deliveries. Delays providing caesarean operations have also been highlighted, resulting in avoidable maternal and neo-natal deaths.

Senior doctors at Parirenyatwa Hospital in Harare met with the then minister for Health and Child Care, Obadiah Moyo, in March 2019, to urge additional resources.

A Doctor in the maternity unit pleaded for support, explaining “I come to work to certify dead (baby) bodies, that’s not why I am here”.

Unicef stressed that globally, “[m]ore preventable deaths occur from low-quality health care than from lack of access” and similarly, in Zimbabwe, reports indicate that nearly all “maternal deaths are occurring at health facilities”.

Such outcomes suggest a systematic failure to meet sufficient standards of good quality, respectful and timely care. Health facilities in Zimbabwe remain under resourced, with shortages of emergency obstetric care provision and a lack of skilled health care workers.

Significant disparities in maternal health outcomes have been reported between rural and urban contexts and between provinces.

Reports also indicate that the burden on public hospitals is increasing as patients flock from private facilities, due to exponential increases in hospital fees (over 100%) and premiums for private medical insurance schemes (between 50% and 400%).

Zimbabwe’s health system has also been affected by the ongoing economic and political crisis in other ways. Nurses and doctors have protested low pay and dire working conditions, with strike action in 2018 and throughout 2019 related to the lack of foreign currency and reduced wages, “severe shortages of medicines… dilapidated infrastructure and obsolete medical equipment.”

Doctors have reported being unable to operate due to dysfunctional surgical theatres, with elective operations in April 2019 down 80% from the same period in 2018 for this reason.

Civil society groups have documented a dramatic decline in health standards at hospitals, and doctors have testified to patients dying due to drug and equipment shortages.

The CWGH also emphasise a crisis in emergency care, with ambulances being unstaffed and unroadworthy.

The government has acknowledged that the challenges include shortages of essential medicines and equipment and consumables, “[p]oor diet [and] [o]vercrowding”, industrial action and “[i]nadequate [i]nfrastructure” of ambulances and service vehicles.

However, as of September 2019, only ZW$712 million (US$54 million) of the ZW$1.67 billion (US$127 million) allocated to health in the national budget had been released, with the major spending going to employment costs.

A matron at one of the hospitals visited by Amnesty International confirmed these constraints when she said that “the hospital has intermittent shortages of maternal resources mainly due to procurement and supply chain issues.

This is because procurement is conducted at a district level and locally, and this lengthens the process”. She also went on to say that the hospital has a huge shortage in human resources and that staff morale is low due to overwork.

A registered adult nurse at the same hospital also stated that nurses are “more overwhelmed and overworked” and that there was a shortage of resources in surgical wards which were needed for fistula surgery, such as special linen which is often hard to find.

Zimbabwe’s health system has been stretched to the limits and worsened by Covid-19.

Covid-19 has become a health, economic and social pandemic threatening the fragile gains Zimbabwe has made in reducing maternal mortality and morbidity in recent years.

In the first three months of lockdown in 2020, 106 maternal deaths were recorded which far exceeded the numbers of recorded Covid-19 deaths. As at around the same time Zimbabwe had only recorded four Covid-19-related deaths.

An inadequate state response to the pandemic further deepened the inequalities that most marginalised women and girls experience. Fearful that the public health system could be overwhelmed, in 2020 authorities imposed several measures that sought to redirect resources to the Covid-19 response.

Some of these measures included reassigning equipment, turning hospital facilities into isolation centres, closure of non-emergency units and reassigning the limited health force to address the potential influx of Covid-19 patients.

World Health Organisation noted, “People, efforts, and medical supplies all shift to respond to the emergency. This often leads to the neglect of basic and regular essential health services. People with health problems unrelated to the epidemic find it harder to get access to health care services.”

In Zimbabwe, the net effect of restructuring the health care workforce and services was the cancellation of antenatal, childbirth and post-partum care for pregnant women and girls. Workforce shortages were also recorded as several skilled health workers were infected by the coronavirus in the process.

Fortune Nyamande, the Zimbabwe Association of Doctors for Human Rights chairperson, was quoted by the Standard newspaper of 26 April 2020 as saying “both rural and urban expecting mothers were vulnerable to the coronavirus.

Most hospitals are now delaying attending to patients with conditions such as diabetes and pregnant women as they give priority to coronavirus cases.”

These core obligations include the right of access to health facilities, goods and services on a non-discriminatory basis, especially for vulnerable or marginalised groups; reproductive, maternal (pre-natal as well as post-natal) and child health care; provision of appropriate training for health personnel, including education on health and human rights; and the adoption and implementation of a national strategy and action plan, with adequate budget allocation, on sexual and reproductive health.

The Committee on Economic, Social and Cultural Rights has stressed that a State party cannot justify its non-compliance with these core obligations, which are non-derogable.

It is notable that unlike the International Covenant on Civil and Political Rights, which makes provision for derogation of rights pursuant to a declared state of emergency, the International Covenant on Social Cultural and Rights does not include a provision on derogations133 thus core obligations in relation to health remain non-derogable during states of emergency caused by pandemics such as Covid-19.

Despite these obligations, the challenges outlined above mean that women and girls continue to face serious barriers to access basic healthcare.
—Amnesty International