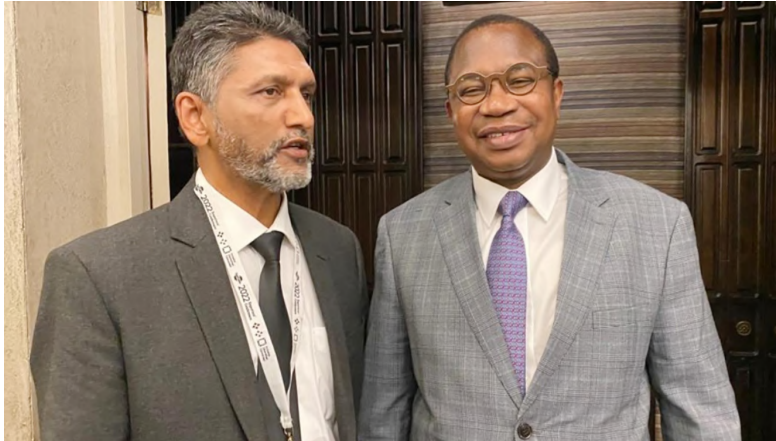 MAURITIUS Finance chief operating officer Vinod K. Bussawah, who is also chairperson of Harare-based financial advisory firm Bard Santner Markets Inc, says Zimbabwe can become a regional financial hub, with Victoria Falls as a financial services centre, if an enabling environment is created, while hard work is put to it.

Bussawah, speaking in a panel discussion moderated by ZTN presenter Andy Hodges, said Mauritius was initially doubted by some, including international financial institutions, when it embarked on its journey to be a financial services hub, but persisted against odds until it worked.

He says Zimbabwe must push hard until it succeeds. The discussion took place at the well-subscribed ZimTrade Exporters’ Conference in Harare on Thursday. The conference was sponsored by Ecobank and Bard Santner Markets Inc, a Harare-based financial advisory services firm which Bussawah also chairs. Mauritius Finance is the voice for the financial services sector in the island nation.

The conference was officially opened by Finance minister Mthuli Ncube who stood in for President Emmerson Mnangagwa who was opening the Public Procurement Second Annual Conference organised by the Procurement Regulatory Authority of Zimbabwe on the same day.

“This year’s conference is being held under the theme ‘Inclusive, Diversified, Connected’, which speaks to the need for us to be deliberately inclusive in developing and promoting trade, and to diversify our export basket as we build the economy and integrate through connecting with regional and global markets,” he said.

“Exports are, indeed, one of the key drivers of economic development and a major contributor to the attainment of our Vision 2030. The broad dictates of our national blueprint, the National Development Strategy 1 (NDS 1), are ‘to be a prosperous and empowered upper middle-income society by 2030, with job opportunities and a high quality of life’.

“The role played by exporters in this endeavour cannot be over-emphasised as they toil to bring in the much needed foreign currency, create jobs for our citizenry and set the pace for technological advancements. This is key to pursue industrialisation aimed at achieving a structurally balanced economy by the end of NDS 1.”

Shava said: “As you are aware, the main thrust of the National Trade Policy is to transform Zimbabwe from an exporter of raw commodities and semi-processed products, to an exporter of internationally competitive high value products. As we diversify our exports from commodities into high-value products, efforts will be made to ensure that all the country’s provinces are included and no-one is left behind in this development process.”

“As we strategise at government and private sector level, we must remain alive to the Africa Continental Free Trade Area and other market access opportunities in Sadc and Comesa region,” she said.

“As we increase value addition, we also need to come up with new products that address current global changing consumer behaviour,” he said. In his address, Bussawah also spoke about Zimbabwe becoming a financial hub, Victoria Falls Offshore Financial Services Centre and the need for a Zimbabwe-Mauritius Business Council to promote business, trade and tourism, among other commercial activities between the two countries.

“Firstly, I am excited by plans to establish the Victoria Falls Offshore Financial Services Centre. If done right, this will be the first step towards establishing trust and attracting global finance, bank deposits and capital,” he said.

“Our experience is that money initially starts timid and doesn’t stay in the banks for long, but over time it eventually settles and then finds its way into the mainstream economy.” Bussawah added:

“Secondly, the establishment of the Victoria Falls Stock Exchange is a good move. We have no doubt the exchange will attract quality listings and significant capital. This is pre-emptive, but my institution is working on listing a foreign asset on the exchange.

“This will bring breadth, diversity and opportunity to the capital market, which would otherwise not be possible.

“A good foundation for these plans would be establishing a Mauritius-Zimbabwe Business Council with a joint secretariat of Mauritian and Zimbabwean businesspeople.

“This council can be created to provide companies in Mauritius and Zimbabwe a unique channel for information sharing, establishing partnerships, trading, and attracting foreign investment. The council will further help with advice on doing business in both countries.”

As an internationally recognised jurisdiction of major repute, it is home to international banks, legal firms, corporate services, investment funds and private equity funds. Zimbabwe has ambitions of doing the same, with Victoria Falls, the country’s premier tourist destination, being positioned to become its financial services hub.

Since its independence in 1968, Mauritius has successfully progressed from the sugar-based monoculture to a diversified economy that includes manufacturing, tourism, finance, and budding high-tech sector.

Its gross domestic product (GDP) has grown by more than 3.5% annually over the last 30 years. The Mauritian miracle resides on essentially two factors.

First, Mauritius embarked on reforms and adopted policies that led to a higher level of social cohesion, welfare and economic growth, while aiming at narrowing the level of inequality among its population.

Democratisation of the economy is spread in core sectors to provide free education, free transportation to school children and pensioners, as well as free health care.

This distinction of merging social and economic equity is an example that curbing inequality is not just a matter of social justice, but of economic performance.