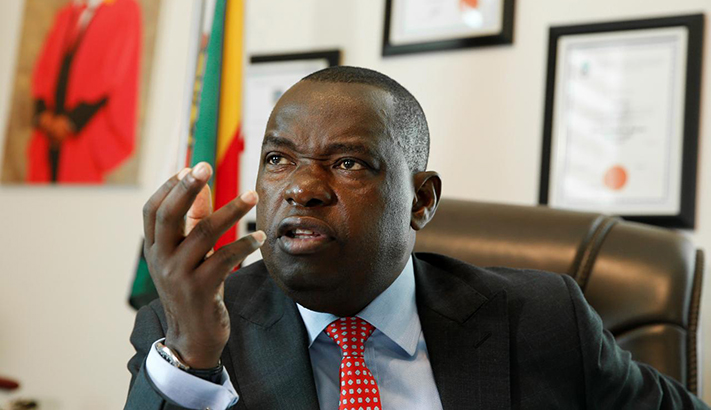 THE Zimbabwe Electoral Commission (Zec) is caught up in a renewed transparency gap as it gets increasingly entangled in a web of lies over its mysterious server which is now at the centre of a new controversy after an independent Internet geolocation forensic investigation traced its system – the client-server connection – to a military-owned communication service provider, Africom Holdings.

While the army says it does not run elections, evidence shows that it in fact does through Fernhaven Investments which was chaired by the late Foreign minister Sibusiso B. Moyo (pictured), who was the face of the November 2017 coup that initially brought President Emmerson Mnangagwa to power.

The technical link between Africom and the army – and in the process Zec – is undeniable. This is besides having security or army personnel seconded there.

According to High Court case HH 357-18, Moyo was a board chairperson and director of Africom, while Chonaka Hlabangane Ndlovu was also Africom director. Kwanayi Kashangura was the major shareholder and director until he was removed. Moyo then took charge on behalf of the army through Fernhaven.

This comes as more details on two key state security agents instrumental in the rigging of elections – Retired Major Chivasa and Mavis Matsanga from the Central Intelligence organisation – emerged, including Chivasa’s photo which has not been published before. Only Matsanga’s picture has been released.

In his seminal monograph on the 2018 presidential election, Excelgate – How Zimbabwe’s 2018 Presidential Election was Stolen, Jonathan Moyo, a former minister and professor of politics, says Mnangagwa lost the election to his main rival Nelson Chamisa, then MDC-Alliance and now Citizens’ Coalition for Change leader, but was rescued by Zec through manipulation and rigging.

After taking over the control of the state and its institutions, the military, in a bid to protect and consolidate the gains of the coup, brazenly commandeered the Zec machinery, particularly its computer network server, corrupted its internal system as well as logistics and illegally changed the route and destination for the collation, compilation and transmission of the result of the 2018 presidential election for purposes of rigging the election in favour of Mnangagwa, whom it had imposed as President of Zimbabwe on 24 November 2017 after toppling the late former president Robert Mugabe.

The Zec computer server sits at the heart of the rigging system and the 2018 electoral dispute.

A server is a computer or system that provides resources, data, services, or programmes to other computers, known as clients, over a network. In computing, it provides functionality for other programmes or devices, called clients. This architecture is called a client-server model.

The Zec server has been at the centre of controversy since the 2018 general elections. At the time, Zec first indirectly said it had a server, then changed the story in court and said it did not have one.

However, Mnangagwa, better placed to know, confirmed it was there in his opposing court papers.

Now Zec says it has no server linked to an external host, meaning it has one housed within its system. Zec spokesperson Jasper Mangwana said: “Zec has no server hosted by any external organisation, including Africom.”

However, an investigation by civic group and data mining experts Team Pachedu, which describes itself as an outfit promoting transparency, responsibility and accountability without any fear or favour, shows Zec servers were being hosted by Africom.

“When the Zec website was hacked on August 1, 2018, forensic experts investigated. They found that Zec was hosted on an Africom server, IP 41.57.65.19, sharing hosting with other sites like netguardsec.com. Shared hosting means the server was not at Zec,” Team Pachedu said.

This geolocation was an important confirmation of what Jonathan Moyo says in his book.

Africom is or was located at No.99 Churchill in Harare. It used to have a banner and fliers displayed in and out of its yard. However, yesterday when The NewsHawks went to check, those were no longer visible from outside, showing they were either removed or the company had moved out.

The Africom offices used to be owned by the late retired army commander General Solomon Mujuru’s River Ranch diamond mine.

The server’s location is the smoking gun – a piece of incontrovertible incriminating evidence. It was central to the presidential election dispute in 2018, summarised by these events:

While Jonathan Moyo was not in doubt about Africom’s involvement and its hosting of the Zec server, Pachedu’s geolocation investigation put the issue beyond reasonable doubt.

Geolocation is a process or technique of identifying the geographical location of a person or device by means of digital information processed via the Internet.

An IP address has two parts: the network ID, comprising the first three numbers of the address (41.57.65), and a host ID, the fourth number (19) in the Africom case.

The IP addresses found and their links put the issue beyond reasonable doubt. The army was in charge of the Zec server, hence the electoral process from a technical point of view. The military also politically influences the elections.

“The foregoing discussion of the 2018 rigging system is particularly important regarding the question of the Zec server, which contained the result of the presidential election that showed Chamisa with 66% of the vote and Mnangagwa with 33%. I have pointed out in the preceding chapters that Zec’s bare denial in Chamisa’s ConCourt case that it did not have any server on which it kept the result of the 2018 presidential election was false and not supported by any evidence, and inconsistent with its constitutional obligation not only to be transparent, but also to be seen to be transparent,” Moyo writes.

“Mnangagwa himself – as President, presidential candidate and the one respondent with everything to lose in the ConCourt case – virtually confirmed the existence of the server in his opposing papers, which Zec claimed did not exist.

“And more tellingly, the involvement of Africom, a military company, was precisely to computerise the electoral process and network the system with respect to the capturing and processing of voting data at Zec’s national command centre. It is Zec that roped in Africom to computerise the system and run its multiple servers, fully knowing that the company’s purpose was to set up a voting and results database.

“It is dishonest for Zec to deny the existence of the server or servers to give the impression that, in this day and age, Zimbabwe’s electoral body does not have a computerised system for capturing, storing and processing voting data. Zec had a main sever with election results and it was linked to other multiple servers run by Africom on behalf of the electoral body.”

Yesterday Jonathan Moyo again nailed Zec when he said: “It is significant that while Zec has denied that its server is hosted by Africom; it has not denied two fundamentals: 1. It has a server, something it denied in the ConCourt in 2018. 2. Africom maintains, services and runs Zec’s computers. The rest is history!”

Govt in volte-face on HIPC status