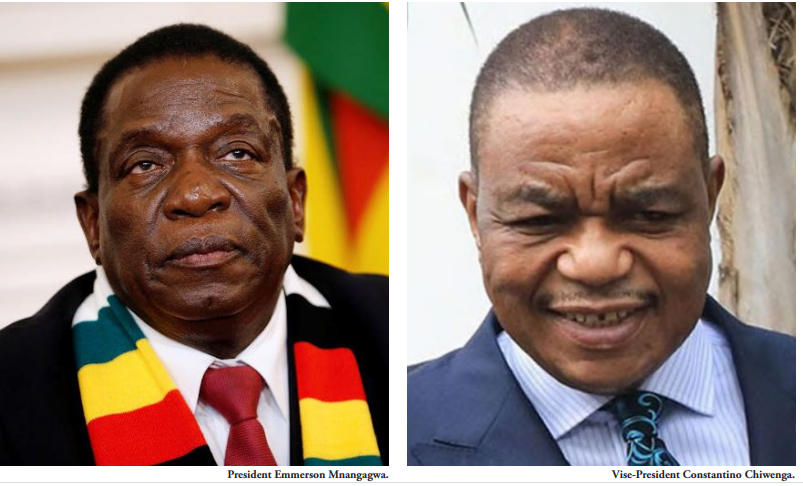 ALTHOUGH President Emmerson Mnangagwa seems to have contained his ambitious deputy Constantino Chiwenga, there is growing concern in Zanu PF that the former military general may challenge for the party leadership at a congress scheduled for December amid escalating tension in the provinces.

Party insiders say Chiwenga will challenge Mnangagwa but Chiwenga has consistently watered down the prospect. In December last year, Chiwenga likened Mnangagwa to Munhumutapa, after a Masvingo traditional leader, Chief Murinye, said the President would lose elections because of his failure to deal with corruption, including by his own children.

Events on the ground, as shown by turf wars in the provinces between Mnangagwa and Chiwenga’s allies, point to raging factional fight.

This is despite Chiwenga having suffered a series of setbacks, including the death of allies, purging of his camp from party and military, resulting in his power base being shaken.

The party is also fretting over a potential “bhora musango” in the 2023 elections should Mnangagwa run for the presidency, as infighting continues in the party between the rival factions.

“No one should go for bhora musango. We want discipline in the party and we can’t have those who think if they are not voted will do what they want. President Mnangagwa is different from others in the past. He will give you a long rope but will suddenly clip your wings. Just wait and see where we are headed,” Chidau said in his recent address of party supporters in Epworth.

There are growing concerns over whether a “subdued” Chiwenga will mount a serious challenge, with insiders warning that the fights may get worse as the party gears for the elective congress slated for December where the Chiwenga camp is determined to challenge Mnangagwa.

The NewsHawks was told this week that the faction aligned to the Zanu PF deputy is intact and on the ground to gain control of districts and provincial structures, although at the top it appeared Mnangagwa was in total control.

The faction’s strong showing in internal elections shows that Mnangagwa does not control the party at grassroots level, observers say.

“It is game on,” an insider said yesterday.

The insider said there were recent manoeuvres by both camps to field candidates in the 26 March by-elections, with the Chiwenga faction also forwarding its people in the process.

Chiwenga’s faction is trying to regain control of Manicaland province that was won under controversial circumstances with Mnangagwa being accused of using his politburo to endorse “rigged” elections where his ally Mike Madiro was facing defeat by Albert Nyakuedzwa, a perceived Chiwenga ally.

Madiro wrote to the national political commissar Mike Bimha accusing the Zanu PF politburo member and former army boss Engelbert Rugeje, a known Chiwenga ally, of presiding over biased polls as he sought to manipulate the results in favour of Nyakuedzwa. He alleged that Rugeje, in the discharge of his duties, “exhibited unrestrained personal and political bias against my candidature while showing unbridled preference for the other contestants.”

Madiro, who was later endorsed as the winner at the instigation of Mnangagwa, has been on a campaign to deal with the Nyakuedzwa camp’s insiders.

Fights are also continuing in Matabeleland North province where Believe Gaule is challenging Richard Ndlovu’s victory, Mashonaland West province where one camp is pushing for the ouster of Mary Mliswa, who is the party provincial boss. Mnangagwa’s man, Ezra Chadzamira, fell in Masvingo during the provincial elections, with Chiwenga’s ally Robison Mavhenyengwa taking the chairmanship instead.

Rugeje unwittingly revealed last week his intention to, at some point, vie for the provincial chairmanship.

He sent a congratulatory message to the new provincial chairperson, a move that insiders said was confirmation of the former military officer’s intention to take charge of the party structures going forward.

Former army generals, among them ex-Presidential Guard commander who is now Zimbabwe’s ambassador to Tanzania Anselem Sanyatwe, have also been flying back into the country and pushing for their preferred candidates in the provincial structures.

Sanyatwe was pushing his wife, Chido, who is also Nyanga North Member of Parliament, in the provincial structures as chairperson of the women’s league together with many of Chiwenga’s allies.

In Mnangagwa’s own backyard, the Midlands province, the party is also divided on factional grounds that has seen him turning the knives against his loyalist Owen “Mudha” Ncube who was last month fired as State Security minister.

Ncube, a longtime ally of the Zanu PF leader, was fired under controversial circumstances, with insiders saying he could have been kicked out for his support for the Chiwenga faction and disregarding Mnangagwa’s advice not to stand in the provincial elections that had become volatile.

The former State Security minister was set to challenge then provincial chairperson Daniel Mackenzie Ncube before they were both asked by Mnangagwa to pull out of the race, with Larry Mavima being chosen as a compromise candidate.

Mnangagwa and Chiwenga were inseparable allies who conspired to topple the late former president Robert Mugabe via a military coup in November 2017 but the two are no longer in good books because the Mnangagwa camp failed to stick to the coup plan, causing divisions.

The initial arrangement, insiders said, was to have Mnangagwa at the helm until 2023 after which he would hand over to Chiwenga. But after a few months in office, Mnangagwa, through his allies, began campaigning for the Zanu PF candidacy in 2023.

Tension and mistrust between Mnangagwa and Chiwenga have been building up since the coup days as the two disagreed on several issues that include cabinet and Zanu PF appointments. Mnangagwa reportedly wanted the party and ultimately the country’s vice-president’s post to be given to Oppah Muchinguri before Chiwenga wrested the post.

In Zanu PF, Mnangagwa and Chiwenga clashed over the appointment of a political commissar, with the Zanu PF leader initially choosing war veteran Victor Matemadanda over Lieutenant-General Engelbert Rugeje before the decision was overturned by the former military bigman.

Rugeje was later removed from the post and in came Matemadanda who was later posted to Mozambique as ambassador. Tensions were escalated by the White City Stadium grenade blast in June 2018, with the Mnangagwa camp alleging it was a plot by the rival camp to assassinate the President.

Mnangagwa also took advantage of Chiwenga’s health woes that saw him spend a long time in South African, Indian and Chinese hospitals, to purge the former military general’s loyalists in government, Zanu PF and the armed forces, severely weakening him in the process.

Mnangagwa took advantage of the gaps to appoint his own loyalists with Fredrick Shava taking over as Foreign Affairs minister while his other ally Anxious Masuka took over the Agriculture post to replace Shiri despite calls by Chiwenga to have a person with a military background taking over.

After the coup, Mnangagwa unleashed a wave of purges in the military, police and Central Intelligence Organisation targeting Mugabe and former first lady Grace Mugabe’s allies, before going for Chiwenga’s loyalists, including Sanyatwe, former Zimbabwe National Army chief of staff retired Lieutenant-General Douglas Nyikayaramba, who was chief of staff responsible for service personnel and logistics.

Nyikayaramba also succumbed to Covid-19. Among Mnangagwa’s strategies was to appoint mainly his ethnic Karanga homeboys, mostly from the Midlands and Masvingo provinces, into key positions in the security sector, as part of a power consolidation strategy.