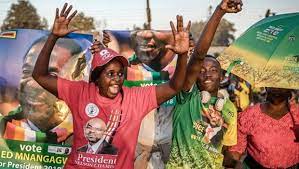 ZIMBABWEANS’ reaction to the hashtags #ZambiaDecides2021 and #ZambiaHASdecided has been so poignant as if to reflect the impression that the elections north of the Zambezi had taken place in the country to the south of the mighty river.

For the powers-that-be in Harare, the anxiety and fear was as palpable as largely shown by deafening silence of the Zimbabwean state media (including the various television and radio stations mostly aligned directly or indirectly with the government) and noisy official publicists on social media during the five days (Thursday to Monday) that were the electoral process in Zambia.

This was also shown by the strident tweets on the part of President Emmerson Mnangagwa’s spokesman George Charamba, with the pre-election caricature of the eventual presidential race winner Hakainde Hichilema as a “sellout”, and post-election declaration that “ED (Emmerson Mnangagwa) won’t leave office after losing election” (because the men in uniform will be there to ensure he stays put).

This week Mnangagwa told a gathering in Mutare during the commissioning of a Verify Engineering oxygen plant that what happened in Zambia will not happen in Zimbabwe, as the reverberations of events north of the Zambezi continue to shake the local political landscape.

“Kana warota zvakaitika kuZambia zvayambuka kuuya kuno, muka ubike doro (There are those who think that because it has happened in Zambia, it will also happen in Zimbabwe.  Let me tell you: stop dreaming about what happened in Zambia),” he said.

On 16 August, Mnangagwa wrote a letter of congratulations to the newly-elected Zambian President Hakainde Hichilema after he defeated incumbent Edgar Lungu in the hotly-contested election that has serious ramifications for Zimbabwe, which goes to the polls in 2023.

Mnangagwa said he urged Lungu to accept defeat and peacefully hand over power to Hichilema, in remarks riddled with irony as his own party Zanu PF and its leaders always vow to refuse to concede losing even at the risk of plunging the country into political turmoil.

Mnangagwa spearheaded the late former president Robert Mugabe’s violent and bloody fightback campaign using the military after his defeat by the late main opposition MDC founding leader Morgan Tsvangirai in the first round of polling during the 2008 presidential election.

On the other hand, the main opposition MDC Alliance, particularly its leader Nelson Chamisa, was so elated at Hichilema’s victory that the state-controlled daily Herald quipped in a tweet, “The day MDC-A’s Chamisa ‘won’ Zambian Zimbabwean elections”.

During the same period, Chamisa told The NewsHawks: “We have spoken to Zambian president-elect Hakainde Hichilema to congratulate him on his victory. We are brothers;  comrades-in-arms. We are very happy he has won. It’s a victory for democracy not just for Zambians alone, but also the whole region.”

The parallels between Zambia and Zimbabwe are too close to call, especially on the electoral front in recent years.

This was reflected also in the discussion of the Sapes Trust Policy Dialogue Forum as the election results were being announced in Zambia on 17 August: “#ZambiaDecides2021: Observations on the national situation and lessons for Sadc and beyond.”

Therefore, the first observation to make in this regard is confirmation of the pattern, not only in Africa, but almost universally, that a massive voter turnout — usually on the back of mass voter registration, particularly of new and young voters — is almost always a protest action against the incumbent.

#ZambiaDecides2021 is almost a perfect fit to the pattern: more than 70% turnout of a total of about seven million voters registered to vote for president, legislators and local government representatives, with over one million first-time voters, mostly youth; and, equally telling, an organisational framework, on the part of the opposition, that translated the massive voter registration exercise into a high turnout at the polls across the country, thereby defying whatever rigging had been planned, and defending the vote through a systematic deployment of both polling agents and volunteers at every polling station.

It is interesting to note that #ZambiaDecides2021 took place against the backdrop of allegations of systematic vote-rigging in 2016, not to mention the attempt by the incumbent regime to adopt Zimbabwe-type militarisation of politics, intimidation of and violence against the opposition.

And even though the Electoral Commission of Zambia (ECZ) will in retrospect have acquitted itself admirably in #ZambiaDecides2021, there was the lingering suspicion that it could be manipulated by the powers-that-be, as alleged in 2016.

Hence, the reports that Hichilema and his United Party for National Development (UPND) invested as much as US$5 million in a Parallel Voting Tabulation (PVT); and, happily, it is also reported, there was a close tally in the numbers of the ECZ and those of the PVT.

As academic and researcher Phillan Zamchiya stated during the Sapes Trust Policy Dialogue last Tuesday, “election-rigging has a ceiling”, and that is evident when an opposition movement is organised ahead of and during the election, on the back of a massive voter registration exercise, a mobilised high voter turnout, especially on the part of the youth most of whom were first-time voters, and a systematic defence of the vote right up to the end of the counting and collation process.

In the final analysis, #ZambiaDecides2021 was definitive in its outcome, especially on the presidential front where Hichilema beat the incumbent by more than a million votes.

It was an outcome against which even the most reluctant of incumbents would have been an obvious rogue not to concede.

All the same, the role of the former presidents, particularly Rupiah Banda, the diplomatic nudges by the various ambassadors (for example the British and the United Nations), and even, according to some reports, such heads of state such as Cyril Ramaphosa of South Africa — all helped Lungu to gracefully concede, thereby ensuring a democratic and peaceful transition for #ZambiaDecides2021.

(Reports are that only Ugandan President Yoweri Museveni of Uganda was the odd one out who tried to urge Lungu to dig in and refuse to concede! No surprise, if true!)

In conclusion, one has to echo the point made by Zamchiya last Tuesday: Democracy needs strong institutions and not strong men; therefore invest in the reform of institutions, including the re-organisation and revitalisation of the opposition movement.

An obvious message to Zimbabwe where institutions such as the Zimbabwe Electoral Commission’s reputation is in tatters, where militarisation of politics is now almost entrenched, and where the November 2017 coup still needs to be cured through the restoration of constitutionalism, the rule of law and the return of the military to the barracks.

But is this possible before 2023, or are we here to witness a repeat of the same, when the opposition forces are not organised and vital enough to overcome and overtake the securocrats through a resounding electoral victory?

Can Zimbabwe learn something from Zambia – there two countries have a lot of similarities – or the political and electoral differences between them are stark and compelling enough to prevent a repeat of #ZambiaDecides2021 south of the Zambezi come 2023?

*About the writer: Mandaza is a Zimbabwean academic and publisher. He convenes the Sapes Trust dialogue series.

Authorities should act on Zimra