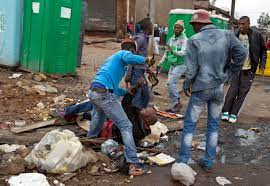 THE dominant story of migration in South Africa is that of xenophobia. The subject is regularly in the news with the focus on both incendiary political rhetoric and acts of violence against foreign nationals.

The anti-migrant sentiment stems largely from South Africa’s dire economic situation. Some people accuse migrants of “taking jobs from locals” amid increased poverty and scarcity of resources. Migrants are also accused of fuelling crime. While the exact numbers of migrants are not known, what is clear is that South Africans believe there are many more migrants in the country than there really are.

Lately, hostility against migrants has been marshalled by organised groups, such as Operation Dudula and the political party Put South Africa First.

These new anti-migrant movements have been decried by South African president Cyril Ramaphosa as “vigilante-type” organisations.

Research has consistently shown that many of the statements that fuel xenophobia are false. They fuel a national narrative of irreconcilable difference between South Africans and Africans from elsewhere on the continent.

This is simply not true. Peaceful and mutually beneficial relationships between South Africans and migrants can and do regularly exist. Xenophobic rhetoric hides this reality.

Anti-migrant sentiment has very real effects. It is estimated that since 2008, when large-scale xenophobic violence first erupted in South Africa, more than 60 people have been killed, and thousands left homeless by episodes of xenophobic violence in the country.

But this does not tell the full story of immigration in the country.

For our study, we turned the focus away from spaces of violence to areas where migrants have been able to settle and live ordinary lives among South Africans. The study was originally examining migrants’ healthcare practices. But in the process we gained insights into the ways in which local practices were being used to make peaceful and mutually beneficial relationships between migrants and locals.

Our anthropological study of migrants in Giyani, a town in the north-eastern part of Limpopo province, examined how Zimbabweans who settled in the area developed their social relationships within it.

This ethnographic study explored forms of friendship and conviviality between Shona migrants from Zimbabwe and Xitsonga-speaking South Africans living in Giyani. The small town was created in the 1960s by the apartheid government as the capital of the then Gazankulu Bantustan, to which Tsonga-speaking people were mainly confined in line with apartheid policies.

We found that, despite all the evidence of xenophobia in the country, migrants in many everyday local contexts were able to create and maintain convivial social relationships with South Africans.

Such networks matter, as they can be used to avoid both physical xenophobic attacks and less obvious forms of social exclusion and marginalisation. Even where the wider community may be hostile towards foreign nationals, convivial social networks afford migrants a level of belonging and protection.

Our qualitative study was based on ethnographic fieldwork conducted in 2017 and 2018. The work was part of a broader project on migrants’ access to healthcare, and ongoing ethnographic work on indigenous knowledge. In total 52 people were interviewed about their health-seeking practices.

During fieldwork we were also able to see the ways in which those migrants who had stayed in the country for up to two years were able to transform their relationships with locals, so that they moved from being outsiders to being part of the community.

They did this by using locally relevant indigenous practices. Hushamwari is a Zimbabwean Shona word which loosely translates as “friendship” but which can also encompass a set of structured activities, such as gift-giving, that bring the concept of friendship into practical being.

The notion of hushamwari aligns with the South African Xitsonga word kuhanyisana (loosely translated as “to help each other to live”). Together, these practices allow for structured social cohesion. Employing the concept of hushamwari enables researchers to examine the ways in which people create reciprocal friendships that are a little “like family”.

Both Shona and Tsonga cultures see people as part of a collective. This is also the case more widely across southern Africa. Being a “proper” person in the region, then, is to be part of a set of socially bonded networks. Since the precolonial era, hushamwari practices of gift-giving and exchange have been used as ways of incorporating new arrivals, such as migrants, into existing social networks.

Our research showed that Zimbabwean migrants to Giyani carefully and deliberately drew on such locally relevant practices to formalise their relationships with Xitsonga-speaking South Africans. Practices included creating stokvels (mutual savings clubs) which South Africans were then invited to join; giving gifts or lending money; and attending parties and traditional ceremonies together.

Practices like this open up a semi-formal transactional relationship which ties people together in mutually beneficial ways. Hushamwari relations straddle the divide between informal friendships, and formal business or family relationships. They also walk a line between gift and market economies. Unlike dominant xenophobic narratives which position African migrants as damaging to South African society, these relationships are mutual and benefit all parties.

We do not want to dismiss the realities of xenophobic violence. But we believe that studying the relationships built by migrants in these hostile contexts can show us how important those networks are to peace-building.

African ideas of making strangers feel at home have been mobilised to good effect in Giyani. This has implications for policy and interventions in spaces where xenophobia is rife.

About the writers: Shannon Morreira is an associate professor at the University of Cape Town in South Africa.

Tamuka Chekero is a PhD candidate in anthropology at the University of Cape Town.–The Conversation.