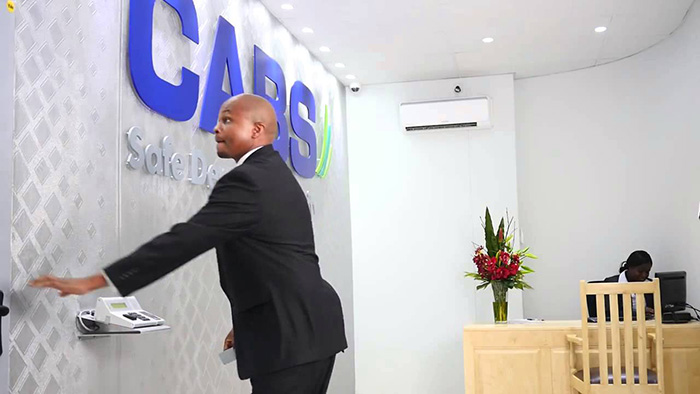 A TEAM of whistle-blowers led by a tenacious Harare corporate tax evasion informant are locked in a dispute with the tax-collector over whether the Central African Building Society (CABS) – the country’s largest building society and a subsidiary of Old Mutual Zimbabwe which offers a wide range of financial services – has been paying tax.

Documents obtained by The NewsHawks show whistle-blowers, led by Harare tax evasion informant Norman Nyabadza, reported CABS to the Zimbabwe Revenue Authority (Zimra) on 28 October 2015, claiming that the financial institution was not paying its tax obligations on various financial products and services it offers outside its mortgaging core business.

The whistle-blowers said as a registered building society, CABS was exempt from paying income tax on its core activities related to mortgaging business, but not on various other financial products and services on which it rakes in millions.

The NewsHawks has reported weeks on end that Zimra officials are corruptly manipulating tax evasion cases for self-enrichment, especially by looting millions from the whistle-blowers funds.

Documents show corruption by Zimra executives who have been looting the whistle-blower’s multi-million-dollar fund through corrupt networks involving its management and informants, particularly one whistle-blower Evans Kujinga who has over 300 cases and has been paid millions, while compromising the tax collector’s management and workers.

The CABS issue is still bothering the whistle-blowers.

CABS was formed in September 1954 and is a wholly owned subsidiary of Old Mutual Zimbabwe, in turn controlled by Old Mutual PLC.

Whistle-blowers said ZB Building Society, one of the oldest mortgage financial institutions in the country owned by Intermarket Holdings Limited, held the same licence as CABS, but was paying tax on income from activities other than mortgage facilities.

After Nyabadza’s report, Zimra allocated the CABS case for investigation in January 2017 amid complaints by whistle-blowers that Zimra officials were delaying or blocking tax evasion cases reported in terms of section 34B (2) of the Revenue Authority Act (Chapter 23:11) either because of incompetence, bribery and corruption, or a combination of all that.

In a letter dated 5 December 2017, Zimra former commissioner investigations boss Charles Jaure wrote to Nyabadza, saying the case had been investigated and closed.

Jaure, who had become commissioner revenue assurance and special projects as the investigations unit later became known as, resigned in March 2019 after a rollercoaster in the eye of a storm over corruption issues.

“I refer to the case cited above which was reported on 28 October 2015,” Jaure said. “Please be advised that the case was audited and finalised, and it did not result in any discrepancies. Accordingly, I wish to advise that your section 34B case has been closed.”

“I have noted that CABS has for a very long time been operating as a commercial bank outside its core business of mortgage financing, but not remitting income tax to Zimra realised from other business apart from mortgage which runs into several million dollars,” the letter said.

“The building society is in diversified business activities, so it’s common sense that it should pay tax on income that it is making besides its mortgage financing facilities.”

In another letter to Pasi, dated 24 January 2017, Nyabadza said CABS financials showed that it had made a net income of US$20.5 million compared BancABC, for instance, which had made a US$200 000 profit.

Pasi resigned amid corruption charges in May 2017 with massive fraud, poor corporate governance and tax evasion scandals engulfing Zimra, including revelations that the revenue collector had been prejudiced of more than US$20 million.

Nyabadza said Zimra’s excuse that it would not collect tax from CABS due to archaic legislation while it was happily levying tax obligations on ZB and other building societies was untenable and unsustainable.

Zimra had said CABS was not paying tax because in terms of the law, building societies do not pay, but whistle-blowers brought evidence that others were paying.

So the informants were questioning discrepancies in the application of the law.

On September 2018, Nyabadza wrote to Zimra saying their responses were contradictory and raising suspicions.

He said when he reported the case it was said it would be referred to the Zimra technical department and the Finance ministry to check on whether building societies should pay tax or not, with reference to the law and policy.

The case was later referred to Zimra acting head of investigations at the time Jephat Muruju.

After a series of back-and-forth exchanges, Nyabadza wrote to Zimra board chairperson Callisto Jokonya on 26 August 2019 complaining the tax collector was protecting CABS.

“Subsequent to my letter dated April 2019 in which I expressed disgruntlement over the manner in which CABS tax issues are being handled at Zimra, I now reveal to you and the board the intricate influence and pressure the bank was exerting on Zimra top management over the case,” the letter said.

“You will recall that in the same letter, I voiced my concerns over two conflicting positions of Zimra after its purported investigation which states that there were no discrepancies found on the one hand, whilst on the other hand it said the case was already under investigation when the whistle-blower reported.”

The whistle-blower said it was interesting to note that many other tax cases that had either being swept under the carpet or hijacked by Zimra executives for self-aggrandisement reasons were handled the same under a cloud of corruption.

Nyabadza said after checking why Zimra was not acting, he discovered that one of the reasons was that Jonasi Mushosho, who was Old Mutual CEO, was also at that time a Zimra board member chairing the audit and risk management committee, presenting a serious conflict of interest for him on the issue. Old Mutual owns CABS.

“With Mushosho in powerful positions both at Old Mutual, which owns CABS, and at Zimra, it is doubtful that Zimra’s findings could pass the test of conflict of interest, scrutiny, accountability, transparency and fairness,” Nyabadza said in his letter.

Efforts to get a comment from CABS and Zimra failed as it is a weekend.