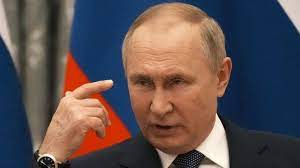 A historian knowledgeable on Russian, Soviet Union and Ukrainian annals speaks on how Vladimir Putin’s history helps explain his current mindset and endgame.

RUSSIAN President Vladimir Putin’s modus operandi in Ukraine has been grounded in an assertion of genocide taking place in the Donetsk and Luhansk People’s Republics and a claim that Ukraine should not exist.

Alexander Motyl — a professor of political science at Rutgers University in Newark and a specialist on Russia, Ukraine, and the Soviet Union — said this is a distortion of Ukrainian and Russian history. He expanded on Ukraine’s relationship with Russia and explained what Putin’s past could reveal about his endgame.

This interview has been edited for length and clarity.

Foreign Policy (FP): Are you surprised Putin’s gone quite this far in Ukraine, given his past?

Alexander Motyl (AM): The intensification of the carnage doesn’t surprise me. I was surprised that [Putin] attacked because it made no sense — and it still makes no sense. But the fact that he’s upped the ante in the last two days — civilian targets, apartments, houses, schools — actually kind of follows logically.

Recall what he did in Chechnya in the Second Chechen War. The Russians levelled the capital city, Grozny. It looked like Dresden, [Germany], after World War II. Recall what he did in a number of Russian cities in 1999 when he had apartment buildings bombed and blamed it on the Chechens as a pretext for the war. Putin is a man who is willing to go the full length to achieve his political goals. … He destroyed Chechnya in order to pacify it.

Initially, I was surprised that the Ukrainians put up such an effective fight. I knew they would fight, and I was also quite certain that the vast majority of the population would take part in the resistance. But that they’d actually be able to hold off the Russians [is] both [a] testimony clearly to their skills, to their weaponry, and, perhaps as well, to the blunders made by the Russian military.

The scary part now is that [Putin] may be likely, or at least conceivably could, apply the same sort of burn strategy that he applied in these other settings. It’s not inconceivable. … And in a way, there is a logic. [For Putin], committing genocide would actually make sense. It would solve the Ukrainian problem once and for all.

FP: And by “the Ukrainian problem,” you mean?

AM: Ukrainians striving for independence. Ukrainians attempting to assert their identity as a nation that is separate from the Russians. Ukrainians trying to build a democratic country. It’s all those things together. They challenge the Russian imperial narrative of which Putin is very much a captive and which he also propounds in virtually all of his statements.

Ukraine, in that sense, is a mortal threat. Not necessarily to a nice, peaceful, democratic Russia but a threat to an authoritarian, quasi-fascist, Putin-like Russia. And it’s certainly a threat to his imperial ambitions. This is where the similarity to Chechnya, Georgia, Transnistria, and Crimea [comes in]. All of them represent steps in Putin’s reassertion of the Russian Empire.

For the Kremlin, Nato’s 1999 war against Serbia is the West’s original sin—and a humiliating affront that Russia must avenge.

FP: What kind of world did Putin grow up in? What does his biography and his background in the KGB tell us about his mindset today?

AM: Start with the fact that he joined the

KGB in the 1970s, at the height of KGB repression against the Soviet dissident movement. He doesn’t join the KGB when the Soviet Union was experiencing a thaw, when the repressions were minimal, at which point one could argue, well, the guy was really concerned with defending the Soviet motherland. No, he joins at precisely the time when they’re cracking down. You know what you’re doing.

This hasn’t been fully appreciated, I think. You’re joining an institution that has one of the bloodiest histories of the 21st century. I mean, it is comparable to the Gestapo in its bloodthirsty nature. And this was the case immediately when [former Soviet leader Vladimir] Lenin first established the Soviet secret police, known as the Cheka. … The whole point of that institution was to institute a Red Terror and to eliminate, ruthlessly eliminate, whoever happened to be a potential enemy of Bolshevik rule.

[Former Soviet leader Joseph] Stalin’s terror was even worse. He imposes this mandate founded on the Ukrainians in 1932 to 1933. … [The Holodomor famine in Ukraine refers to a period of extreme grain shortages in the Soviet Union, when Communist Party leaders demanded Ukrainian peasant households surrender all food to the state.] And again, that was engineered. It was artificial, and it was intended to break Ukrainian resistance to his agricultural and cultural policies. … No fewer than four million Ukrainian peasants were starved to death.

The terror continues through 1953; then it subsides under [former Soviet leader Nikita] Khrushchev. Repressions continue — or revive, rather — under [Communist General-Secretary Leonid] Brezhnev. It’s no longer on the same level as under Stalin, but they were nevertheless severe, and thousands of Soviet political prisoners wind up in jail. This is the institution Putin joins.

In my mind, that says it all. You don’t need to go much further than that. In order to understand his upbringing, his personality and his own views. This is a man who was committed to doing whatever was necessary to sustain the Russian or Soviet state. And he’s obviously still willing to do that.

FP: So what does Putin ultimately want? With Ukraine and even Belarus? What can Russia’s expansionist tendencies tell us about Putin’s endgame?

AM: [Putin] denies the existence of a Ukrainian nation. He insists that Ukrainian statehood is illegitimate and artificial. Neither the Ukrainians nor the state have any right to exist; they’re actually Russian, according to his narrative.

Any attempt by Ukrainians to assert their identity and assert their independence, either in World War I or World War II in the interwar period, that is simply because they are on the pay of foreign intelligence. So back in 1918, the culprits were the Austrians and the Germans, who ostensibly were the paymasters of Ukrainian nationalists.

So ultimately, the goal is to bring Ukrainians and Belarusians all into the fold of Russia. And one expects, if recent trends continue, that the degree to which Belarusians, also, will have a separate identity from Russia is likely to decline. And at some point, you know, even if they don’t merge the two states, officially, it will be very difficult to distinguish where Belarus begins and where Russia ends. And my guess is that’s what he would like to do in the Ukrainian case. Which means, of course, that he needs to eliminate all individuals who have a separate Ukrainian identity.

Now, the problem here is that according to his somewhat deranged view of Ukraine, he thinks it’s just a handful of troublemakers. But as recent events have shown, virtually the entire population of Ukraine considers itself to be Ukrainian and different from the Russians. … So if Putin is serious about eliminating people who are separate from and want to remain separate from Russia, then the only way that he can do that is by genocide. It’s terribly disturbing. I’m not saying this is necessarily going to happen. But it’s an option that has suddenly become thinkable. Totally thinkable. And the more you think about it, the more thinkable it becomes.

Why the end is nigh for the MDC, Douglas Mwonzora