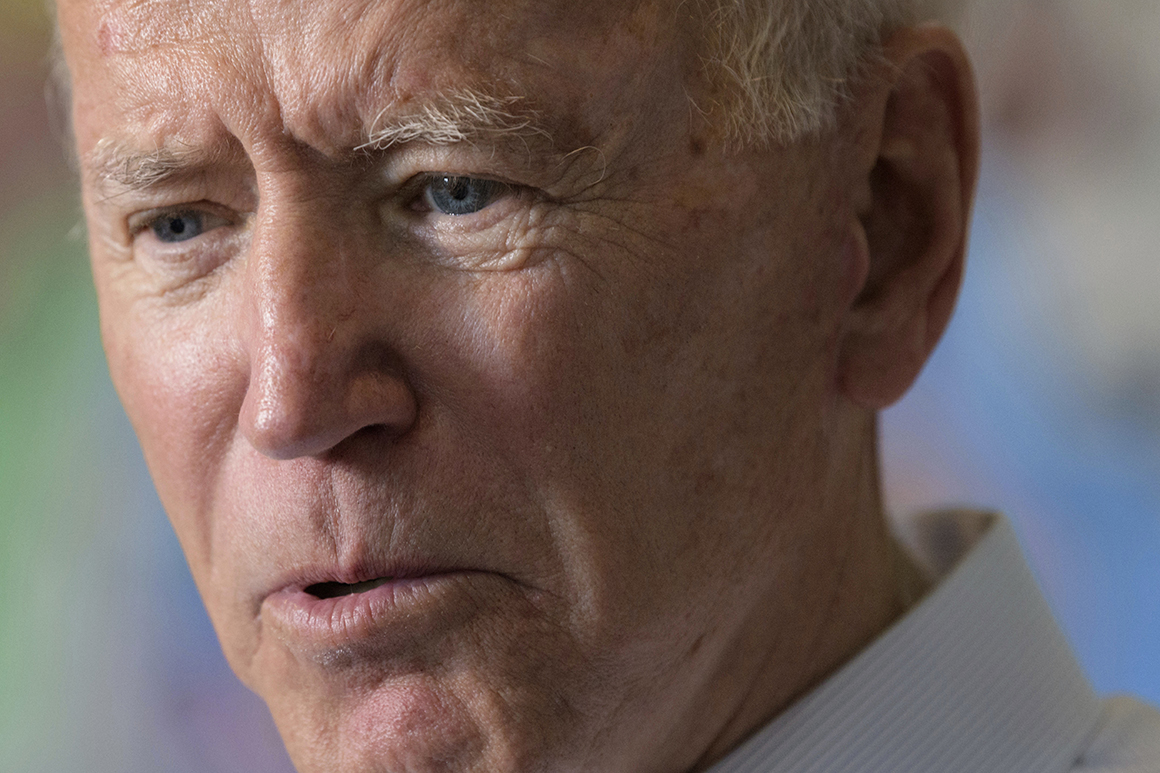 In this July 23, 2019, photo, Democratic presidential candidate former Vice President Joe Biden speaks in New Orleans. Biden is placing a big bet that his loyalty to the Affordable Care Act will help propel him to the Oval Office. Yet his argument isn’t without openings for attacks. From the left, he’s certain to take heat from progressives who back the single-payer, government run system proposed by his rival Bernie Sanders and supported by Elizabeth Warren and Kamala Harris. (AP Photo/Matthew Hinton)

However repressive his regime, Vladimir Putin was tolerated by the United States, Britain and the European Union – until he became intolerable.

His focus was inevitable. “While it shouldn’t have taken something so terrible for people around the world to see what’s at stake, now everyone sees it clearly,” the US president said. “We see the unity among leaders of nations and a more unified Europe, a more unified West.”

In the countdown to the invasion, the Conservative chairperson Oliver Dowden flew to Washington to address a think-tank with impeccable links to Donald Trump. “As Margaret Thatcher said to you almost 25 years ago, the task of conservatives is to remake the case for the West,” the cabinet minister told the Heritage Foundation. “She refused to see the decline of the west as our inevitable destiny. And neither should we.”

The liberal order. Over the three weeks since Putin declared war on ordinary Ukrainians, these phrases have been slung about more regularly, more loudly and more unthinkingly than at any time in almost two decades. Perhaps like me you thought such puffed-chest language and inane categorisation had been buried under the rubble of Iraq. Not any more. Now they slip out of the mouths of political leaders and slide into the columns of major newspapers and barely an eyebrow is raised. The Ukrainians are fighting for “our” freedom, it is declared, in that mode of grand solipsism that defines this era. History is back, chirrup intellectuals who otherwise happily stamp on attempts by black and brown people to factcheck the claims made for American and British history.

To hold these positions despite the facts of the very recent past requires vat loads of whitewash. Head of the European Commission, Ursula von der Leyen, claims Vladimir Putin has “brought war back to Europe”, as if Yugoslavia and Kosovo had been hallucinations. Condoleezza Rice pops up on Fox to be told by the anchor: “When you invade a sovereign nation, that is a war crime.” With a solemn nod, the former secretary of state to George Bush replies: “It is certainly against every principle of international law and international order.” She maintains a commendably straight face.

None of this is to defend Putin’s brutality. When 55 Ukrainian children are made refugees every minute and pregnant women in hospital are shelled mid-labour, there is nothing to defend. But to frame our condemnations as a binary clash of rival value systems is to absolve ourselves of our own alleged war crimes, committed as recently as this century in Iraq and Afghanistan.

It is to pretend “our” wars are just and only theirs are evil, to make out that Afghan boys seeking asylum from the Taliban are inevitably liars and cheats while Ukrainian kids fleeing Russian bombs are genuine refugees. It is a giant and morally repugnant lie and yet elements of it already taint our front pages and rolling-news coverage. Those TV reporters marvelling at the devastation being visited on a European country, as if its coordinates on a map are what counts, are just one example. Another is the newspapers that spent the past 20 years cursing eastern

Europeans for having the temerity to settle here legally and now congratulating the British on the warmth of their hearts.

And then there is the unblushing desire expressed by senior pundits and thinktankers that this might end with “regime change” – toppling Putin and installing in the Kremlin someone more congenial to the US and UK and certainly better house-trained. Spotting the flaw here doesn’t require history, it just needs a working memory.

The west has already tried regime change in post-communist Russia: Putin was the end product, the man with whom Bill Clinton declared he could do business, rather than the vodka-soused Boris Yeltsin. Indeed more than that, London and New York are not just guilty of hosting oligarchs – giving them visas, selling on their most valuable real estate and famous businesses – they helped create the oligarchy in Russia. The US and the UK funded, staffed and applauded the programmes meant to “transform” the country’s economy, but which actually handed over the assets of an industrialised and commodity-rich country to a few dozen men with close connections to the Kremlin.

In 1993, the New York Times Magazine ran a profile of a Harvard economist it called “Dr Jeffrey Sachs, Shock Therapist”. It followed Sachs as he toured Moscow, orchestrating the privatisation of Russia’s economy and declaring how high unemployment was a price worth paying for a revitalised economy. His expertise didn’t come for free, but was bankrolled by the governments of the US, Sweden and other major multinational institutions. But its highest cost was borne by the Russian people.

A study in the British Medical Journal concluded: “An extra 2.5-3 million Russian adults died in middle age in the period 1992-2001 than would have been expected based on 1991 mortality.” Meanwhile, the country’s wealth was handed over to a tiny gang of men, who took whatever they could out of the country to be laundered in the US and the UK. It was one of the grandest and most deadly larcenies of modern times, overseen by Yeltsin and Putin and applauded and financed by the west.

The western values that are being touted today helped enthrone the monster who is now shelling Ukrainian women and children. However corrupt and repressive his regime, Putin was tolerated by the west – until he became intolerable. In much the same way, until last month Roman Abramovich was perfectly fit and proper to own Chelsea football club. Now No 10 says he isn’t. There are no values here, not even a serious strategy. Today, Boris Johnson claims Mohammed bin Salman is a valued friend and partner to the UK, and sells him arms to kill Yemenis and pretends not to notice those he has executed. Goodness knows what tomorrow will bring.

About the writer: Aditya Chakrabortty is a Guardian columnist.

From message to violence: what to watch for in the media ahead of Kenya’s elections