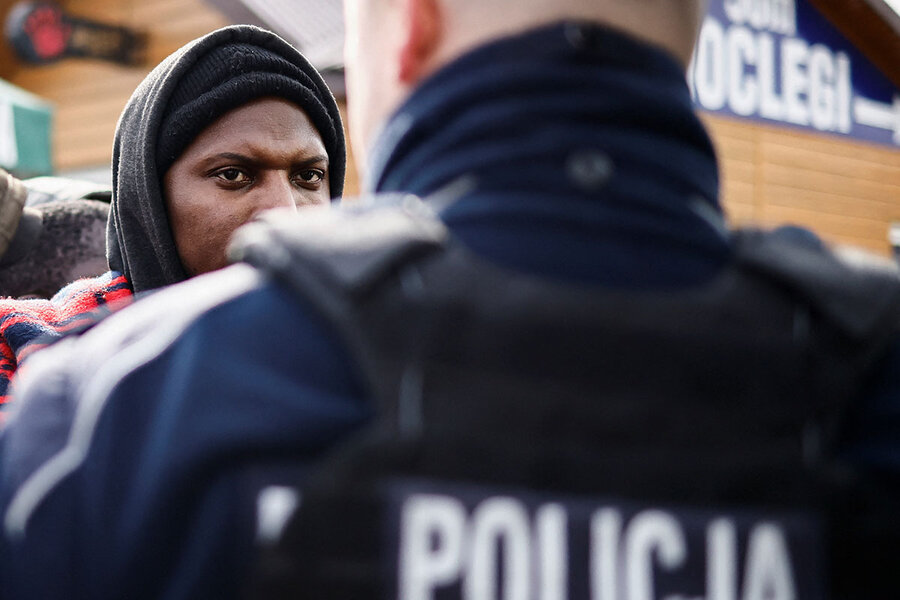 IT was inevitable that when brown-skinned Afghan refugees fleeing war were turned away from European borders over the past few years, the callous actions of these governments would come back to haunt them.

One million people fled Ukraine from Russia’s violent invasion in the span of only a week. They are being welcomed — as refugees should be — into neighbouring nations, inviting accusations of racist double standards.

Poland offers the most egregious example of national racism. Its government, whose nation borders Ukraine, has welcomed traumatised Ukrainians, just months after turning away Afghans. If these optics were not bad enough, Polish nationalists have sought out people of colour who are among the refugees fleeing Ukraine and attacked them.

According to The Guardian, “three Indians were beaten up by a group of five men, leaving one of them hospitalised”. Africans studying in Ukraine joined the exodus after Russia’s invasion, and have been stopped at the Polish border. Poland might as well erect a giant sign on its border declaring, “whites only”.

In elevating such disparate skin-tone-dependent attitudes toward refugees, Europe is giving its colonialist heritage a new lease on life. We see echoes today of the dehumanisation that enabled European colonisation of the Global South and the enslavement of generations. It’s not just Poland. The Arab and Middle Eastern Journalists Association has denounced the overtly racist language of many Western journalists, including Americans such as Charlie D’Agata of CBS who said of Ukraine that “this isn’t a place, with all due respect, like Iraq or Afghanistan, that has seen conflict raging for decades”. (In fact, Ukraine has seen plenty of conflict in the past years.)

D’Agata’s insertion of “with all due respect” was perhaps his belated realisation that he was veering into dangerous territory by contrasting Ukrainian civilisation against the presupposed barbarity of the darker nations. But then, he continued, saying, “this is a relatively civilised, relatively European — I have to choose those words carefully, too — city where you wouldn’t expect that, or hope that it’s going to happen”.

Again, D’Agata probably realised as the words were escaping his mouth just how racist he was sounding. His later apology was not convincing.

Serena Parekh, professor of philosophy at Northeastern University in Boston, said in a recent interview: “It is very human to feel connections to people that you perceive to be like you and to feel more remote from people you perceive as being not like you.” At the very least, this is a good reason newsrooms across the United States need to diversify their staff.

Parekh, who has written two books, including No Refuge: Ethics and the Global Refugee Crisis and Refugees and the Ethics of Forced Displacement, says that one “assumption” she has heard justifying favorable treatment of the latest wave of refugees in Europe is that “Ukrainians are not terrorists and they are not criminals, and so we can let them in safely, without having to worry about screening them”. She calls such views “racialised assumptions … largely unsustainable by any evidence”.

Such assumptions are infectious. Social media platforms abound with images sporting the now-ubiquitous blue and yellow of the Ukrainian flag. Ukraine’s President Volodymyr Zelenskyy has emerged as a larger-than-life hero to the morally outraged. So invested are people in believing Zelenskyy’s heroism that many have shared a photo (including several of my own Facebook friends) of him in military fatigues as evidence of his courage in standing up to Russian militarism, when in fact the image was captured well before Russia’s invasion.

Similar expressions of solidarity with brown-skinned resisters of Western militarism or victims of Western wars have been far less common.

Pointing out the double standards of governments and the press at a time when Ukrainians are watching their nation getting destroyed will inevitably spark accusations of insensitivity and of being irresponsible in “whataboutism” to make a point.

But now is the time to call out what human rights groups and independent journalists have for years been saying: that the US and Nato-led wars in Afghanistan, Iraq, Syria, Somalia, and elsewhere are racist, and that the callous dismissals of the resulting humanitarian catastrophes are equally barbaric.

There’s another reason brown-skinned refugees are seen as undesirable. Welcoming those people fleeing wars that the West has fomented would be an admission of Western culpability. Not only do Ukrainian refugees offer palatable infusions of whiteness into European nations, but they also enable governments to express self-righteous outrage at Russia’s imperialist ambitions and violent militarism. If Ukrainian refugees are evidence of Russian brutality, then Afghan and Iraqi refugees are evidence of the same kind of brutality on the part of the US and Nato.

While Europe’s double standard toward refugees is on full display in Russia’s war on Ukraine, the US is certainly not innocent either. Former president Donald Trump effectively slammed shut the door on refugees during his tenure and bolstered his anti-refugee policies with racist language.

President Joe Biden, who campaigned on reversing Trump’s anti-refugee rules, initially faltered on keeping his promise when he took office. But, even after the limits on allowing refugees into the US were eventually lifted, few have been admitted into the country. Last year, when US troops left Afghanistan at the mercy of the Taliban, Afghans were desperate to flee. Although the Biden administration laudably fast-tracked US resettlement for Afghans, problems remain, with one refugee advocate calling the process, “kind of abysmal”.

Parekh says that decisions by Poland and other nations to admit fleeing Ukrainians with open arms, “[show] that the European Union can take in large numbers of asylum seekers and can do so in a relatively efficient way”.

In light of the sudden wellspring of compassion toward Ukrainian refugees emerging from Western nations, media, and the public, a simple thought experiment could protect governments, journalists and us from further accusations of racist double standards: we could treat all refugees as though they were white-skinned Ukrainians, as though they were human.–Economy For All.

About the writer: Somalia Kolhatkar is an award-winning radio and television host, weekly columnist and published author.

Elitism affects schools across the globe: it needs to be kept in check