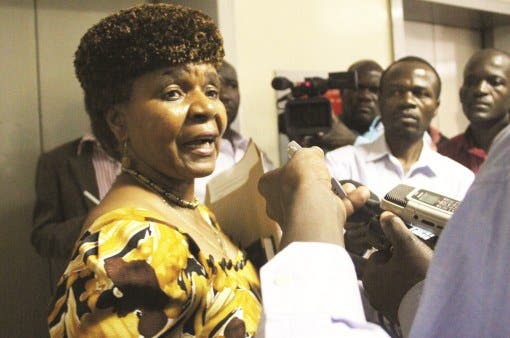 ZIMBABWE’S political parties lock horns in by-elections scheduled for 26 March, but there are allegations that the Zimbabwe Electoral Commission (Zec) is tampering with the voters’ roll ahead of the polls, while there have been complaints that some parties are receiving preferential treatment ahead of the elections, including by the police, thereby affecting the integrity of the polls. Violence has also been a major concern.

The NewsHawks reporter Mary Mundeya (MM) asked Zec spokesperson Joyce Laetitia Kazembe (JK) to respond to the allegations. Kazembe maintains that Zec is professional. Below are excerpts of her written responses:

MM: On 20 February, the ruling Zanu PF and the opposition Citizens’ Coalition for Change held their star rallies. The police imposed unrealistic conditions on CCC, such as a prohibition on the busing in of party supporters, but there were no such impossible conditions for Zanu PF.  As the electoral commission, why have you remained silent in the face of such blatant bias?

JK: The commission has no policy of commenting on issues it has not witnessed first-hand or on the basis of media commentary or social media stories. However, the commission has been on record calling on all political parties and candidates to uphold provisions of the code of conduct which they signed and presented to the commission, along with their nomination papers, at all its engagements with various stakeholder groups.

The most recent engagement with all political parties and/or candidates, including independent candidates, was at Pandhari Centre, where and when the commission launched the National Multi-Party Liaison Committee on 23 February 2022, where the same call was made.  Steps to be taken by parties and individuals affronted by unfair players and/or practices by anybody or other body are clearly laid out.

The Electoral Act [Chapter 2:13] provides for a number of electoral malpractices, some of which are considered criminal, for which perpetrators can be prosecuted. These malpractices can and should be reported for investigation by the aggrieved party to the Zimbabwe Republic Police (ZRP), or the Zimbabwe Human Rights Commission (ZHRC).  It stands to reason that, since in this case the complaint is against the police, it is prudent that the matter be referred to either the ZRP or the Zimbabwe Human Rights Commission – or to both – for investigation.

Yes, the Zimbabwe Electoral Commission can receive complaints, but it does not have the power, authority or capacity to investigate criminal offences; at best, Zec refers any such reports to the aforementioned institutions.

MM: Police blocked thousands of opposition supporters from reaching the venue of the CCC rally in Highfield, yet Zanu PF supporters travelling to the Marondera rally were not subjected to similar treatment. How credible will the by-elections be, in view of such an uneven political environment?

JK: It is quite premature for one to come to a conclusion that the political environment is uneven on the basis of isolated incidents. It is known that elections by their nature are highly conflictual, and this is the reason why the electoral law provides for mechanisms to deal with such disputations whenever they arise. But as already mentioned above, if a political party is aggrieved, or has any issues with the police, the relevant body to deal with such issues is the Zimbabwe Human Rights Commission or the ZRP itself.

But for any other disputation requiring immediate attention, section 160C of the Electoral Act outlines functions of a Multi-Party Liaison Committee as follows: (a) to hear and attempt to resolve any disputes, concerns, matters or grievances relating to the electoral process, including, in particular, any disputes arising from allegations concerning non-compliance with the code of conduct for political parties, candidates and other stakeholders.

MM: Governance watchdog Team Pachedu has extensively analysed the voters’ roll and unearthed serious anomalies. Why has Zec unilaterally made changes to 156 polling stations without following due process in violation of the Electoral Act?

JK: The commission has already issued a statement dismissing those allegations as pure malice bent on diminishing the public’s confidence on the voters’ roll and the country’s electoral processes. The so-called analyses being posted on social media platforms are clearly targeted at confusing the electorate and tarnishing the image of the Commission.

The commission has also taken a position not to respond to issues raised on social media unless this has been communicated to it through the formal channel. The commission is, therefore, calling upon the so-called governance watchdog to approach the commission formally, if their intention is truly to get the correct position regarding the voters’ roll.  Incidentally, did the commission indicate it ever issued a voters’ roll against which allegations are being made?

MM: Zec has altered 170 867 addresses without following due process. Why have you not gazetted these changes?

JK: And again these analyses are being made on social media without any effort to approach the commission through the proper channels. Why is the so-called governance watchdog not willing to engage the commission directly if they are genuine in their analyses?

JK: The commission issued out a statement disassociating itself with the copy of the alleged voters’ roll with these and other claims. In any case, allocation of polling stations to registrants is determined purely by their proofs of residence presented to voter registration officers. In all the commission`s voter education materials and publicity programmes, proof of residence is one of those requirements.

MM: Since Zec introduced a biometric voter registration exercise in 2017, you have never released a full voters’ roll showing pictures and fingerprints to enable proper independent analysis. Are you aware that the full voters’ roll, by law, is supposed to be a public document?

JK: In the case of Mpezeni vs Zec and others (HH-475-18), the High Court granted an order interdicting the commission from publishing voters’ pictures in the voters’ roll, for whatever reason.

It was held that doing so would violate voters` rights to privacy as enshrined in section 57 of the constitution which says every person has a right to privacy.  Please, be current and properly educated on reasons pertaining to the non-publishing of voters’ pictures and fingerprints in the voters’ roll: it can be highly dangerous.

MM: Zec has suspended officials it accuses of leaking a copy of the voters’ roll to be used in the March 26 by-elections to local pressure group Team Pachedu.  Why has Zec made it so cumbersome for political parties and civil society to access the voters’ roll?

JK: The suspension of Zec officers was purely an administrative matter. Voters’ rolls issuance is in terms of section 21(3) of the Electoral Act [Chapter 2:13] and as per set procedures and upon payment of a fee. The process of acquiring the voters’ roll is not cumbersome at all but procedures have to be followed, within the confines of the regulations governing this.

MM: Your voters’ roll says there are 49 voters staying at House Number 1, Harare Road in Kwekwe. There is no residential residence at that address. Surely, there is no credibility in such a voter register?

JK: The allocation of polling stations to registrants is purely determined by their proofs of residence presented to voter registration officers. Voter registration officers are not duty bound to go and physically check whether the details on the affidavits and other proofs of residence presented to them by prospective registrants are correct or not.

It is incumbent upon all eligible voters and other stakeholders to act in good faith in relation to all electoral processes.  Residents and prospective registrants are reminded that an affidavit is a sworn statement; if one presents false information on affidavits used as proof of residence, they commit an offence of perjury.

MM: The public media is still not treating political parties equitably. Why is Zec allowing this unlawful conduct to continue?

JK: Sections 160G of the Electoral Act provides for equitable distribution of free airtime by the public broadcaster to contesting political parties and candidates while section 160H of the same Act outlines issues to do with political advertising in both broadcasting and the print media.

Any political party that fails to respect those recording times will forfeit their allocated airtime; hence, the free airtime will thus not meet its intended objective – opportunity for free space and self-advertising or canvassing to the potential voters.

Any other time slot outside the allotted one will have to be paid for.  Even as we write this, some political players have already forfeited their airtime by non-appearance. Incidentally, “equitably” does not mean “equally”.

The commission appeals to the media and political players to also adhere to the media regulations outlined in Statutory Instrument 33 of 2008 in the coverage of the by-elections.

MM: The number of new voters who have taken advantage of the voter registration blitz has not been impressive and this has been attributed to the unresolved problem of lack of national identity documents. Why are you not pushing for a national ID blitz?

JK: Honestly, it is conjecture that the Zimbabwe Electoral Commission has the capacity, let alone the authority, of pushing for a national ID blitz.  The Registrar-General’s Office is an independent institution that works according to its schedule, dependent on its requirements and needs for specific processes.

Nonetheless, the issuing of national identity cards will be resolved in phase 2 of the mobile voter registration exercise that will take place from 11 to 30 April 2022.  Then, the Registrar-General’s Office will deploy teams that will issue identity cards during this phase.