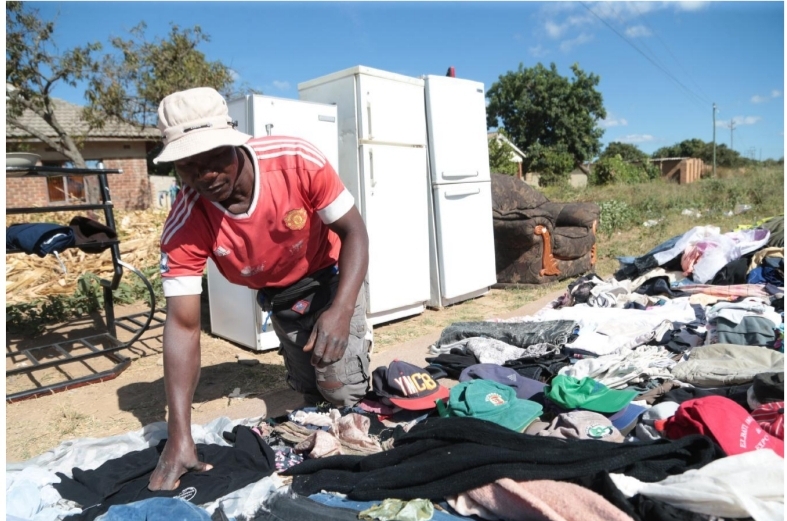 PARADZAI Mhare (51) sits miserably on a sofa by the roadside, waiting for elusive customers to visit his makeshift stall of second-hand clothes in Epworth, east of Harare.

NYASHA CHINGONO
Clad in torn khaki shorts, Mhare (pictured) wears a crestfallen face as he switches on his little radio receiver, his only source of entertainment.

Zhakata’s song aptly details the ordeals of Mhare’s in today’s Zimbabwe, which many Zimbabweans can identify with, 41 years after Independence.

Mhare was only 10 in 1980 when the streets of Harare were set abuzz with Independence euphoria and the late former president Robert Mugabe memorably promised heaven on earth in Zimbabwe.

As a schoolboy, he was hopeful that the new republic had arrived at the “Promised Land” but, 41 years later, the country is still wandering in the wilderness.

“Things are tough now. Just after Independence, things were better, we even went to primary school for free. Things started changing in the 90s and now it is worse,” Mhare told The NewsHawks.

Mhare, a shift worker at National Foods, supplements his meagre income, with selling second-hand clothes to eke a living.

Mhare also sells refrigerators and second-hand sofas, to earn the extra dollar as he struggles to fend for his four teenage children on his measly income.

“I am gainfully employed but the income is nothing to talk about. I am selling here so that I can get enough money to transport myself to work. I am subsidising the company and it does not make sense at all,” Mhare said.

Despite his 29 years of toil, Mhare has no home of his own.

He also longs to buy a family car, but for now, the 51-year-old will have to shrug off other Epworth residents on a bus queue, each morning on his way to work.

“What do I do with ZW$10 000 when my children want to eat and go to school? This small business is my only hope for survival,” he said.

On a good day, Mhare makes US$15 from selling second-hand clothes and more when customers with deeper pockets either buy the second-hand sofas or the reconditioned refrigerators.

Mhare said life had become unbearable for industry workers as they are getting poorer by the day.
“We are working for nothing; we are being enslaved for nothing. Now they took away the transport subsidy, so we have to dip into our meagre salaries.”

“It is only faith in God that keeps us alive because we have seen the worst in this country. Only God knows where he is taking this country,” Mhare said.

Zimbabwe has been experiencing unrelenting economic problems since the turn of the century, with millions of families living on donor aid.

Once a promising country, Zimbabwe has become synonymous with poverty, as millions of citizens, including professionals, leave the country for greener pastures.

While it may not always be greener on the other side, most Zimbabweans choose to toil in foreign lands to take care of their families back home.

As the Zanu PF government entrenched its authoritarian rule in the country, Zimbabwe became increasingly isolated from the international community, a situation that has had serious ramifications for the economy.

Mugabe’s ruinous economic policies plunged the country into hyperinflation in 2008.

So bad was the inflation situation that Zimbabwe broke hyperinflation records in the 20th century — surpassing Germany in the 1920s, Brazil in the 1980s, Argentina and Angola in the 1990s.

Zimbabwe would go on to adopt a multi-currency regime in 2009, after the Zimdollar became worthless, helping to steady the economy and putting a lid on inflation.

But Charles Chipfunde (76) has fond memories of Mugabe, despite his ruinous economic policies since 1980.

“Mugabe did quite well in the early ‘80s, life was very good back then. He however changed his stance on the economy and things went south, but I still miss him, we had a good leader,” Chipfunde says with a chuckle.

“During the early days of Independence things were promising but as you know that things change, life has become more difficult,” he adds.

Chipfunde blames Covid-19 for the tough economic conditions, saying life has become unbearable.
“Covid-19 has made things worse. Before, these things were going really well for some of us,” Chipfunde said.

Under the guise of a new beginning, Zimbabweans stormed the streets in November 2017, demanding Mugabe’s resignation.

The joy of a “New Dispensation” was short-lived as President Emmerson Mnangagwa’s regime quickly proved that it was no different from Mugabe.

Despite the international goodwill, Mnangagwa has failed to implement economic and political reforms to transform Zimbabwe’s economy.

Now back in isolation, Zimbabwe is struggling to secure a rescue package as multilateral financial institutions like the International Monetary Fund (IMF) and World Bank, owing to unpaid arrears in foreign debt.

With no end in sight to Zimbabwe’s woes, Mnangagwa’s failure to transform the economy has affected women, who have borne the brunt of economic problems.

Thelma Banda (20) struggles to calm her one-year-old baby girl who is crying uncontrollably.
Banda’s baby is visibly emaciated and her patched skin that hangs on her tiny body shows she is malnourished.

The 20-year-old mother says she barely has food to eat.

“Life is tough here. I can only afford to eat once or twice a day. This has affected the production of milk, that is why my baby is always hungry,” Banda said.

Banda, has been struggling to eke a living, selling African print cloth.

“I sell a single cloth for US$10 but people do not have much to spare, customers are elusive these days. I sometimes sell fish and vegetables, but the money is just not enough,” Banda said.

With millions suffering under the weight of economic pressures where formal unemployment is over 90%, many Zimbabweans, while acknowledging that the attainment of Independence was important, are yet to enjoy the fruits.

Zimbabwe is now a pale shadow of the country that former president Mugabe inherited in 1980. Former Tanzanian leader Julius Nyerere told Mugabe in 1980 that Zimbabwe was “a jewel in Africa, do not tarnish it”.

But 41 years down the line the jewel has become a blight on Africa, troubled by unending economic woes and ruined by corruption which, according to Transparency International, cost the country US$1 billion annually through illicit financial flows.

Mnangagwa appears to be walking in Mugabe’s footsteps on a familiar path to economic ruin.

Investment into Zimbabwe has dwindled over the years because of toxic policies, while the country’s state enterprises continue to buckle under corruption, misgovernance and lack of profitability.

Just a year more than 40 — the number of years taken by the Biblical children of Israel to reach the Promised Land following perilous times in the wilderness — Zimbabwe’s Promised Land remains a distant mirage.

The thriving economy inherited from the colonial Rhodesian government has crumbled over the years with the future looking gloomy.

With the troubles Zimbabwe has faced since attaining Independence from British settler minority rule, it is hard to believe that the Zimbabwean dollar was once worth US$1.50.

Zimbabweans will however continue to scrounge for a living until they see better days.