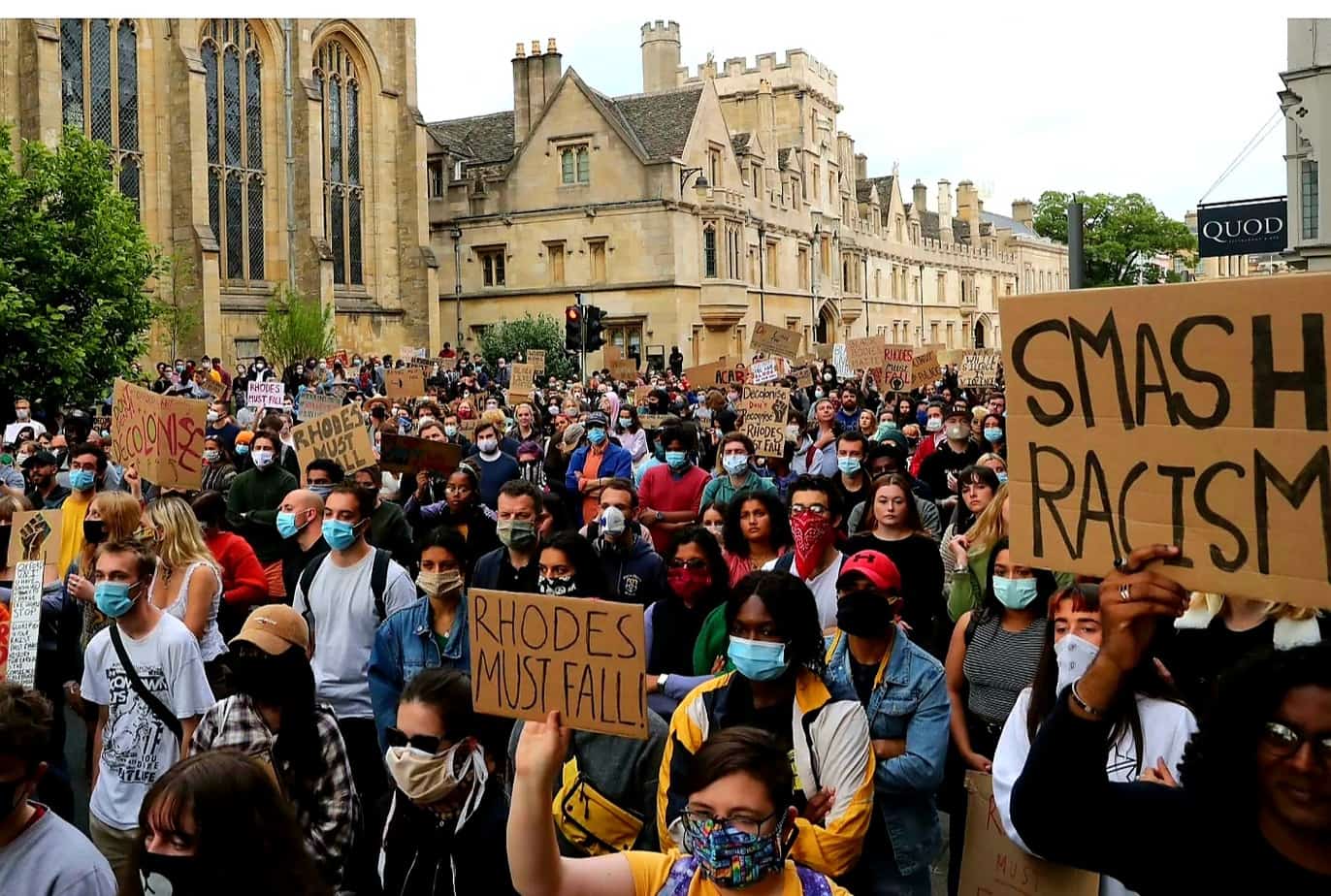 CAMPAIGNERS and politicians have condemned the University ofg Oxford   for backtracking on its previous decision to remove a statue of the British imperialist Cecil Rhodes and ignore the views of an independent commission.

Oriel College, Oxford said on Thursday it would not “begin the legal process” of moving the statue at this stage owing to “regulatory and financial challenges” presented by its removal, despite a vote by the independent commission supporting its removal.

Anti-racism campaigners said it was a cynical betrayal and exposed the “insincerity” of the college’s stated commitment to change.

The campaign group Rhodes Must Fall demanded “full transparency” on any communications from politicians and government officials from the college and whether the withdrawal of funding from alumni played a role in the latest decision.

But the education secretary, Gavin Williamson, welcomed the move, tweeting: “Sensible & balanced decision not to remove the Rhodes statue from Oriel College, Oxford – because we should learn from our past, rather than censoring history, and continue focusing on reducing inequality.”

The commission was set up last June after the governing body of the college voted in favour of removing the statue.

The commission was asked to look into the issue after a statue of the slave trader Edward Colston was torn down in Bristol at the height of last summer’s Black Lives Matter protests in the UK.

A majority of the commission’s members supported the expressed wish of the governing body to remove the statue. The commission also urged Oriel’s governing body to publish a definitive statement of its view concerning its association with Rhodes, and that the college revise materials to ensure they are consistent with the statement, in a report that was leaked to the Guardian on Wednesday.

In response, the college said it would not be moving the statue, stating that its removal would be subject to difficult legal and planning processes involving the secretary of state for housing, communities and local government, Robert Jenrick, who said in January that he would introduce changes to the law to protect statues from what he called “baying mobs”.

The college said a majority of the submissions to the commission backed the retention of the statue.
Susan Brown, Oxford city council’s leader, said: “I am personally deeply disappointed that Oriel College have chosen today to backtrack on their previous decision to remove the Rhodes statue and ignore the views of the commission on this crucial part of their work.

For people in our city this was the most important action that Oriel College could have taken to show an acknowledgment of the discrimination of the past and they have failed to act.”

Simukai Chigudu, an associate professor of African politics at Oxford, described the governing body’s decision as chilling. “The statement from Oriel College is shocking and, quite frankly, embarrassing. It exposes the insincerity of the college’s stated commitment to change, which was made last summer during the anti-racism protests,” he said.

“Most chilling, however, is the waffle and obfuscation in the college’s statement. The statement claims that the process of removing the statue would be too expensive and would yield no certain outcome.

What does that mean? As an alternative to taking down the statue, Oriel says they will increase provisions for BAME students. But framing this as a binary choice is both false and insulting.”

Maya, a 20-year-old student who is part of the campaign group Common Ground Oxford, called it “a betrayal of the campaigning work that has been done by community activists and students”.

She said: “There is no way of making the statue neutral in its current position, looking down on passers-by on the high street. Every day, black and minority ethnic students and workers have to walk beneath Rhodes’ stone feet.”

Shaista Aziz, the Oxford city council member for inclusive communities and a member of the independent commission, said the report reflected on issues around race, class and representation at Oriel College, the wider university and, crucially, the city of Oxford, a diverse and multiracial city.

“The commission’s recommendations on the future of the statue are clearly laid out in the report; it’s up to the college’s governing body to decide how it wants to move forward with the recommendations. The commission maintains its independence and has shown it’s listened to a wide group of people with a range of views,” she said.

The college has agreed to a number of other recommendations made by the commission, including developing a strategic plan for improving educational equality, diversity and inclusion and fundraising for scholarships to support students from southern Africa.

Dr Samir Shah, the vice-chair of the Policy Exchange’s History Matters project, said Oriel had chosen to “focus its efforts on making Oxford a more diverse and open institution.

“In short, Oriel has rightly decided not to spend time on a fruitless effort to change the past, but to plough resources into trying to change the future, especially for ethnic minority young people.”

Neil Mendoza, the provost of Oriel College, said: “It has been a careful, finely balanced debate and we are fully aware of the impact our decision is likely to have in the UK and further afield.

We understand this nuanced conclusion will be disappointing to some, but we are now focused on the delivery of practical actions aimed at improving outreach and the day-to-day experience of BME students.

We are looking forward to working with Oxford city council on a range of options for contextualisation.”
A spokesperson for Rhodes Must Fall demanded Oriel maintain the original decision it made last year.

“No amount of diversity and inclusion initiatives will suffice in lieu of the removal of the physical images which glorify white supremacy,” it said.
– The Guardian (UK).