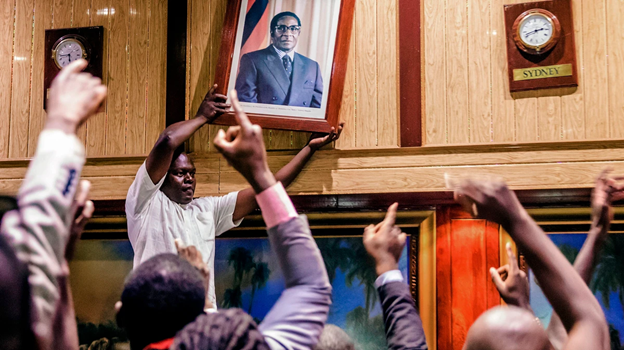 COURAGE Machemwa (25) is serving chips to customers just after midnight at a shopping centre in Kambuzuma, a busy suburb in Harare, Zimbabwe’s capital.

Despite having passed all the necessary exams to qualify for university, Machemwa struggled to find work after leaving school, so he inherited this setup last year from his mother who has been running it for the past 16 years.

“I could not proceed to the university because my mother, then a vendor could not afford to pay my fees,” Machemwa told VICE News. “We are five in our family, and only one is employed as a security officer at a local security company.”

Machemwa is one of many young Zimbabweans whose future has been slowed by the country’s severe economic crisis, forcing most industries to close three years after the 2017 military coup that overthrew Robert Mugabe.

Machemwa remembers waking up in the early hours of 15 November 2017, and turning on ZTV— the country’s state-controlled television station. The military had taken over ZTV and all radio stations, and placed Mugabe, who had ruled Zimbabwe since its Independence from Britain in 1980, under house arrest. Later that day, Major-General Sibusiso Moyo appeared on TV to announce that Mugabe and his family were safe, and to deny that a coup was underway. Instead, Mayo claimed that the military were simply targeting criminals around Mugabe.

Eventually, Mugabe, together with his wife Grace, higher education minister Jonathan Moyo and then local government minister Saviour Kasukuwere, were all accused of corruption.

The military’s decision, which quickly gained support across the country and with members of the opposition parties, led to the ousting of Mugabe, and paved the way for the exiled former vice-president Emmerson Mnangagwa to become president. Mugabe died last September, aged 95.

Mnangagwa was widely seen as a saviour to Zimbabweans who were bearing the brunt of the economic malaise under Mugabe’s regime.

However, the future for young people like Machemwa is not as clear as they envisioned three years ago, as the country experiences its worst economic crisis in decades, with shortages of basic commodities, power outages, incessant price hikes, and crippling health and education sectors. Nearly 8 million people, about half of Zimbabwe’s population, are food insecure.

Economists and political analysts believe the downturn is a result of mismanagement, bad governance and corruption, all overseen by Mnangagwa.

While the Zimbabwe National Statistics Agency in its Labour Force and Child Labour Survey of 2019 puts the country’s unemployment rate at 16.4%, experts like Peter Mutasa, leader of Zimbabwe’s Confederation of Trade Unions, believe the figure is much higher, thanks to a largely informal work sector.

Zimbabwe imports nearly everything from furniture, food and even toothpicks from South Africa and China. According to the United Nations’ Food and Agriculture Organisation, the southern African nation, which was once the breadbasket of Africa, will import an estimated 1.1 million tonnes of grain over the next year to meet demand.

After outlawing the use of multi-currencies in mid-2019 and introducing its local currency, the Zimbabwean dollar, the latter has dropped considerably. As of September this year, Zimbabwe’s inflation rate was nearly 700%, according to the Reserve Bank of Zimbabwe. And there are shortages of medicine in public hospitals, leaving the majority of its population struggling to access health care.

Over the past few months, Bulawayo and Harare have experienced severe water shortages, forcing residents to resort to fetching from open wells where it is contaminated by burst sewages. Government workers embarked on a strike in October against poor working conditions, as well as demanding their salaries to be paid in US dollars.

In response to these challenges, Mnangagwa’s administration—after dumping its “Open for Business” PR campaign—have turned to blaming sanctions for the country’s economic struggles. The government has even dedicated the 25th of October ever year as a day to campaign against sanctions.

The United States and its allies imposed “targeted” sanctions on Harare in But the US continues to insist that sanctions will remain until Mnangagwa enacts comprehensive electoral and human rights reforms.2002, following the Land Reform Programme that saw around 4,500 white farmers lose this land.

“Mr Mnangagwa’s administration continues to insist that sanctions are to blame for the disastrous state of the country’s economy,” said Jee-A van der Linde, an economist at NKC African Economics. “However, the country’s economic troubles are mostly attributable to frequent policy missteps.”

Government officials have been accused of corruption, with Mnangagwa’s family members accused of being involved in some illicit dealings. Health minister Obadiah Moyo was fired in July this year over allegations surrounding the awarding of a US$60 million contract to a United Arab Emirates-based company to supply personal protective equipment and Covid-19 test kits.

The president of the Zimbabwe Miners’ Federation, Henrietta Rushwaya, was arrested at Robert Mugabe International Airport in Harare after allegedly attempting to smuggle 6kg of gold worth US$333 000 out of the country.

Harare-based economist Victor Bhoroma told VICE News that the government cannot solely blame sanctions without developing strategies to grow the economy and curb corruption. Until then, “the Zimbabwean economy remains in a more fragile state than it was in 2017,” Bhoroma said.

When it comes to human rights abuses, Mnangagwa’s government has shown itself willing to use force on citizens. In August 2018, the military shot dead six civilians in the streets of Harare who were demonstrating against the electoral body delay in scheduling the first national election since Mugabe left power.

In January 2019, the military was deployed to quell demonstrators protesting against Mnangagwa’s decision to hike fuel prices by 150 percent, killing about 17 people while hundreds were injured.

From March to September of this year, the Zimbabwe Human Rights Association noted over 1 200 human rights violations, ranging from unlawful arrests, assaults, threats and intimidations to the harassment of journalists and extrajudicial killings across the country. Journalist Hopewell Chin’ono and opposition leader Jacob Ngarivhume were arrested in July 2020 for inciting public violence, following their tweets to mobilise citizens to protests against corruption.

They were denied bail several times, a move activists believe came from the government. They were released eventually after spending more than a month in a maximum security prison.

Chin’ono has continued to expose corrupt deals involving those close to Mnangagwa. He was re-arrested early this month on charges of contempt of court after he tweeted about how authorities were interfering with court judgments.

Nqaba Matshazi, an official with the Media Institute of Southern Africa, told VICE News that Zimbabwe is entering a dark period.

“We are sliding into a world where freedom of the media is not guaranteed,” Matshazi said. “Freedom of expression and association has deteriorated sharply. We had thought it will never happen since the coup in 2017 which promised so much hope.”—VICE News.