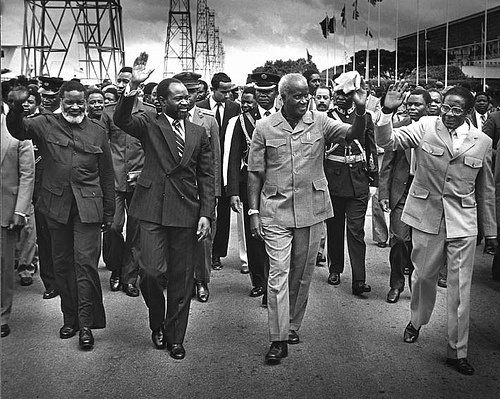 The 2021 South African municipal elections were held on 1 November to elect councils for all local and metropolitan municipalities across the country. It was the sixth municipal election since the end of apartheid in 1994. According to the Electoral Commission of South Africa, the ANC’s national support level dropped from 53.91% in the 2016 elections, when its decline accelerated, to 46.04% this year, the party’s worst-ever performance in a democratic election since the end apartheid in 1994.

Apart from that, the ANC lost and failed to secure majority control of major metros, including the commercial hub Johannesburg, encompassing the separate Ekurhuleni, Tshwane (which includes the capital Pretoria), Cape Town and Durban. There were 66 hung councils. Main opposition Democratic Alliance (DA)’s national support also declined from 26.9% to 21.84%.

The other key opposition party, the Economic Freedom Fighters (EFF), garnered 10.42% of the vote. Out of 213 municipalities, the ANC got 161 municipalities. The DA secured 13, while Inkatha Freedom Party (IFP) garnered 10. In the eight metros, the DA won Cape Town, while the ANC controlled Mangaung and Buffalo City.

No party got more than 50% in the other five big cities. The elections were characterised by apathy. Out of 26.1 million registered voters, only 12.3 million voted. Addressing the nation at the announcement of the results, President Cyril Ramaphosa said a record 325 political parties, nearly 95 000 candidates and over 1 500 independent candidates participated in the elections.

“This is a sign that multiparty politics is flourishing in South Africa, and that everyone has an equal chance and opportunity to run for public office,” he said.

The outcome of the elections rang an alarm bell for the ANC at home and across the region. Although the party still controls well over 50% of the country’s parliamentary seats, its decline in two consecutive polls, a plunge to unprecedented levels, has brought into sharp focus not just its waning popularity, but most importantly, the current state of former liberation parties in southern Africa. It is not only the ANC, which is in trouble in the region.

The Botswana Democratic Party won 53% in the last general election in 2019, up from 46.45% in 2014. This shows that the party in power since the country’s independence in 1966 no longer commands the huge majorities it used to enjoy in the past.

In Namibia, President Hage Geingob was in 2019 re-elected with a massive 31% drop in support; his vote nosedived from 87% in 2014 to 56%, Swapo’s lowest-ever return for a presidential election candidate in history. Swapo also retained its majority in the National Assembly, but lost a two-thirds super-majority.

In Zambia, Kenneth Kaunda’s United National Independence Party (Unip) died in 1990. Founded in 1959 under Mainza Chona while Kaunda was in jail, Unip ruled from 1964 to 1991 under Kaunda when it was the sole legal party between 1973 and 1990.

At the end of 1990, multi-party democracy was reintroduced, and Unip, which had enjoyed guaranteed victories under the one-party state since 1973, was roundly defeated in the 1991 general elections by the Movement for Multi-Party Democracy (MMD). Kaunda was defeated in the presidential vote by MMD candidate Frederick Chiluba, receiving just 24% of the vote, while in the National Assembly elections Unip won 25 seats to the MMD’s 125 in a spectacular collapse of a liberation movement.

Following changes to the constitution which effectively barred Kaunda from running for president again, Unip boycotted the 1996 elections, although two members contested National Assembly seats. The party returned to contest the 2001 polls with Kaunda’s son, Tilyenji, as its presidential candidate. He received 10% of the vote, finishing fourth out of the 11 candidates.

In the national assembly elections, the party won 13 seats. Prior to the 2006 elections, the party joined forces with the United Democratic Alliance alongside the other two largest opposition parties. United Party for National Development (UPND) leader Hakainde Hichilema was the alliance’s presidential candidate, finishing third. The alliance won just 26 seats in the national assembly, down from the 74 the three parties had won in 2001.

Unip did not contest the 2008 presidential by-election, but nominated Tilyenji as its presidential candidate for the 2011 polls; he received less than 1% of the vote, finishing sixth in a field of 10 candidates. The party also failed to win a seat in the national assembly, receiving only 0.7% of the vote.

This story marks the painful death of a liberation movement. In 1994, the Malawi Congress Party of Hastings Kamuzu Banda, which had governed the country since independence in 1966 to 1993 as the only party, was decisively routed by the United Democratic Front (UDF).

Former president-for-life Banda was defeated by the UDF’s Bakili Muluzi. Between 1994 and 2020, Banda’s party was pushed into the political wilderness until President Lazarus Chakwera brought it back to power last year after a court-ordered election re-run. In Kenya, the Kenya African National Union, in power from 1963 to 2002, was defeated. Mozambique’s first multi-party elections were held in 1994 following the end of the civil war in 1992.

General elections then took place in 1999, 2004, 2009, 2014 and 2019 — all of them won by the former liberation movement Frelimo. The polls have often been marred by boycotts and violence, as well as accusations of fraud and corruption against the ruling party. Participation in the elections has also been low, declining to a mere 45% previously.

Frelimo won a landslide in 2019, but the ongoing conflict could shake the party’s grip on the electorate. In Tanzania, Chama Cha Mapinduzi (CCM) is still the dominant ruling party and the second longest-ruling party in Africa, only after the True Whig Party of Liberia.

During the 2020 elections, the late president John Magufuli, succeeded by President Samia Suluhu Hassan, received 12.5 million votes — or 85% — while his main rival Tundu Lissu of the Chadema party, got 1.9 million votes, or 13%. CCM is still strong, but its supremacy is being challenged.

The ruling Zanu PF — which was defeated in the 2008 general elections, but saved by a government of national unity deal — remains in power through authoritarian repression, violence and killings, as well as corruption and patronage. Although Zanu PF was previously popular, over the years, it lost support due to its leadership, policy and governance failures during the reign of the late president Robert Mugabe.

It has only rebuilt through sheer brutality and intimidation. Beginning 2000, Zanu PF lost in all major cities and towns to the opposition MDC, exiling it to rural areas.

The ANC this week dropped below 50% and lost control of major cities in South Africa in the country’s municipal elections, registering its worst electoral performance since the end of apartheid in 1994. Liberation movements portray themselves as the political aristocracy of southern Africa that have earned their legitimacy to govern through armed struggle in perpetuity.

But they have, in fact, reinvented history — with particular emphasis on the armed struggle — to provide historical legitimacy and solidarity in order to combat internal and external threats to their purported national democratic revolutions.

The armed liberation movements arose in southern Africa in the second half of the 20th century to fight for an end to colonialism, white minority rule and economic exploitation, all sharing an African nationalism and socialist ideology.

Three or more decades later, some remain in power, but they are steadily losing support in young and changing societies which demand more competence, delivery and accountability. The parties had common characteristics: they were all African nationalist movements, they all embraced Marxist ideology and were involved in armed struggle against white oppressors.

Despite having similar contexts, struggles, nationalist purposes and socialist ideology, their time in power has also encompassed different realities. Yet the common threat is that those that are declining or have lost power failed to serve the people’s interests.

They became captured by elites who then share the spoils and seek to reproduce themselves to ensure self-preservation, while alienating the people who walk away and disengage from politics and voting.

This has definitely been the situation from Zambia, Malawi, Kenya, Zimbabwe and now South Africa in different ways. Long used to unchallenged dominance, liberation movements have significant adjustments to make to rise to the challenge of a new era. Yet they may only have a limited window within which to act and reinvent themselves, or simply die.