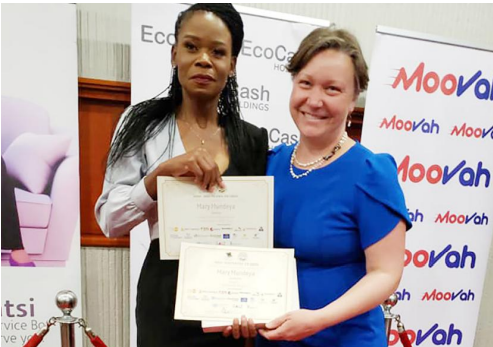 The training programme is funded by Sweden’s Fojo Institute, an independent institution at the public Linnaeus University, which focuses on media development, working to strengthen free, independent and professional journalism in the Scandinavian country and worldwide.

The training project, Strengthening the Capacity of Female Journalists on Investigative Journalism in Zimbabwe, brought together female journalists from different media houses in the country specialising in various aspects of investigative journalism — from formulation of a story hypothesis, crystallising an idea, pitching, planning, budgeting, timelines, sourcing, verification, choosing narratives to writing, as well as packaging and distribution of the content.

After the training, the participants pitched and wrote investigative stories for their media houses, including The NewsHawks.

Another participant of The NewsHawks’ training programme, who works for a state-controlled media group, also won a Njama award for a story on foreign currency, arbitrage and arbitrary pricing of goods published by her newspaper. She had pitched the story idea during training.

Mundeya’s story on the Zimbabwe National Water Authority awarding a US$4 million tender to Helcraw Electrical boss Farai Jere despite his being in court on allegations of defrauding Zesa was the first runner-up for the Legal and Parliamentary journalist of the year award. Jere was recently acquitted on the case.

She, however, scooped the big one after her story on the dodgy awarding of the Kunzvi Dam construction tender to China Nanchang Engineering ahead of other cheaper and competitive bids was adjudged the best parliamentary story.

For her story published with FeedZW, which was about the journey to self-discovery of an intersex person who was born with two sexual organs (ambiguous genitalia), Mundeya scooped the Sogie Northen Region journalist of the year award.

A delighted Mundeya, who walked away with US$700 in prize money, says she owes her success to hard work and the female investigate journalism training programme which gave her a new skill set and sharper cutting edge on how to crystallise story ideas, pitch and investigate, as well as write.

“I’m grateful for having been given an opportunity to be part of The NewsHawks female investigative journalism training programme which enabled me to have a better skill set, deeper understanding of investigative techniques and handling of bigger assignments,” Mundeya said.

“My news editor and one of my trainers Owen Gagare was instrumental in making me unlock my potential as an individual, pressuring me to step out of my comfort zone and explore different dimensions of story-telling from a multimedia perspective, which I’m very keen on.”

Gagare said he was pleased that the training programme was already bearing fruit. He said several participants were good, but Mundeya was outstanding. “We launched the training at the end of April with 10 trainees from different media houses, covering different beats,” he said.

“ The fact that two of our trainees scooped Njama awards bears testimony that the programme has been a success within a short period of time. I think all the trainees will grow from strength to strength, and make an impact in their areas of interest, inspiring other female journalists in the process.”

The NewsHawks managing editor Dumisani Muleya said it was encouraging the training was already helping participants to scale investigative journalism heights. “We are happy from the bottom of our hearts for Mundeya and others who won awards. But we are more delighted that The Centre for Public Interest Journalism’s female investigative journalism training programme, which we run, has quickly made an impact over a short period of time despite initial planning, funding, Covid-19 and logistical problems we faced,” Muleya said.

“Initially, the project was set to kick-start mid-November 2020, but due to the Covid-19 pandemic, the training was rescheduled into 2021. Although, the funding was approved in the last quarter of 2020, signing and pre-assessment awards were only carried out in the first quarter of the current year which saw the receipt of the first tranche in March followed by the launch on 30 April 2021, and commencement of the training programme on 17 May 2021.

“We would like to thank the participants, our funders, Fojo Institute/International Media Support and trainers for making things happen. Special thanks go to some of the professional trainers who did a great job, including veteran journalist Geoff Nyarota, Susan Makore, Happiness Zengeni, Cordelia Masalethulini and Gagare.”

Muleya said the training programme is continuing and should eventually be institutionalised.

“We haven’t finished yet. We started with a group of 10 participants, now we are going to recruit yet another group of 10 trainees,” he said.

“The project is aimed at training female journalists in Zimbabwe on investigative journalism to enhance their skill set, exposure and capacity to pursue ethical, professional and in-depth reporting — focusing on various subject matters in the public interest.

“The main objective of the project, which spans the whole value chain from training to reporting and management, is to produce a new generation of female reporters who will contribute significantly to the development of investigative journalism, address gender disparities in media and management structures in Zimbabwe.

“The programme engages and empowers young female journalists to train, sharpen and develop their investigative skills. This will assist them to develop their careers by building support networks — social capital that is — to address various challenges in the workplace and media structures. “Beyond their personal development and contribution to the investigative journalism, that will help society in which they live and work by probing and covering issues of public interest to awaken communities on important matters.” — STAFF WRITER

What Zim leaders can learn from FW de Klerk’s legacy