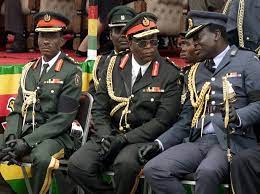 A CENTRE of gravity is defined as a “hub of all power and movement upon which everything depends”.  It is that characteristic, capability or location from which Zanu PF derives freedom of action, physical strength, or willpower to fight elections.

This sphere is the centre of its electoral advantage; it might not be constant throughout an election cycle, thus requires continuous review.

The strategy of capturing the electoral process has been executed through:

(i) use of the security sector as a key part of campaign teams;

(ii) deployment of retired securocrats and war veterans to instil an environment of fear, sabotage and foreseeable Zanu PF dominance;

(iv) issuing of televised press statements by army generals during the run-up to elections with the intention of reminding the electorate that voting Zanu PF is better than assured punitive consequences of voting the opposition and;

(v) populating state institutions responsible for administering elections with securocrats and their loyalists capable of sacrificing professionalism for loyalty to Zanu PF.

Firstly, the military has directly and indirectly taken charge of the election processes and made it hard that anyone not aligned to it would win elections.

This has been part of Zanu PF philosophy.  Meredith (2007) observes that the late former president Robert Mugabe, making this concession in one of his speeches said, “our votes must go together with our guns. After all, any vote we shall have, shall have been the product of the gun.

The gun which produces the vote should remain its security officer – its guarantor. The people’s votes and the people’s guns are always inseparable twins.”

It is this very system that Mugabe constructed that engineered his eventual downfall. Literature on electoral processes in Zimbabwe shows that after the security sector successfully installed Mugabe in the leadership of Zanu PF in the aftermath of the Mgagao Declaration by Zanla forces in 1975, all elections that followed have been militarised.

Mugabe left Rhodesia for Mozambique to seek seizure of the party leadership and intensification of the armed struggle in 1975 after his release from prison with other nationalists the year before and the subsequent death of Zanu chairman Herbert Chitepo in 1975. The Mgagao Declaration laid the foundation of two important historical events: It was the precursor to the removal of then Zanu leader Ndabaningi Sithole and basis for the elevation of Mugabe as the leader of Zanu at a special congress in Chimoio two years later in 1977.

In 1980, the governor of Zimbabwe-Rhodesia, Lord Christopher Soames, had initially expressed fears that elections might not be conducted in some Zanu PF strongholds due to violence perpetrated by Zanla forces during campaigns, only to change this decision a few days towards elections.

Zpra forces were not immune from doubling as campaign commissars for Zapu and its leader Joshua Nkomo. This has created a culture of letting the securocrats influence politics and election results.

The security sector that installed Mugabe after capturing Zanu went on to force PF Zapu into the 1987 Unity Accord after it had been satisfied that the Central Intelligence Organisation, 5 Brigade and other militia had executed their assigned campaign strategy across Zapu strongholds.

The killings scaled 20 000 and above following Zanu PF’s militarised campaign in Matabeleland and Midlands regions before the 1985 election, and were carried out in a style later used in the 2008 presidential election run-off.

This legacy will always remain in the minds and hearts of Zimbabweans as they approach elections and it has been often invoked to instil fear and influence choices of the electorate. That is what the late political scientist Masipula Sithole described as “the margin of terror” – instead of the margin of error – which must be factored in opinion polls on elections in Zimbabwe.

(i) use of violence, threats and forcing a sellout tag on opposition members and supporters in their door-to-door Zanu PF campaigns;

(ii) they are scattered across the country’s communities to indoctrinate, monitor and spy on citizens at household levels;

(iii) they are used to make grassroots to perceive them as Zanu PF creators, kingmakers and fathers of the army;

(iv) their capture and use of public resources (schools, government aid and projects, local government infrastructure) to further Zanu PF political interests; (v) they preside over Zanu PF capture of government food handouts and using them in “food-for-a-vote” campaigns in hunger-stricken villages and;

(vi) they undermine and frog-march traditional leaders at kraal head level to vote for Zanu PF. Under such circumstances, election results are already predictable before elections take place.

The electoral process is thus captured. Reminiscences of pre-election Zanu PF military exercises such as: Operation Gukurahundi (1982-7), land reform (2000), Operation Murambatsvina (2004) and Operation Makavhoterapapi (2008) are still fresh in the minds of violated communities.  The clampdown on vendors that coincides with voter registration in Harare in 2017 was another example; it must be understood as more of a political strategy of sabotaging opposition strongholds than clearing the streets.

These “military operations” have been a clear long-term strategy of rigging the electoral environment in that:

(i) they have all been strategically timed—implemented towards contested presidential elections;

(ii) they were targeted at areas where Zanu PF would have performed dismally in the previous election and,

The 2008 run-off elections provide the clearest example of using the gun to “protect” the vote.

But prior to the 2008 elections it would be critical to look at the most notable assurance that came in the run-up to the 2002 presidential elections when the then Zimbabwe Defence Forces commander, General Vitalis Zvinavashe, released a Press statement in the state media, saying: We wish to make it very clear to all Zimbabwean citizens that the security organisations will only stand in support of those political leaders that will pursue Zimbabwean values, traditions and beliefs for which thousands of lives were lost, in pursuit of Zimbabwe’s hard-won independence, sovereignty, territorial integrity and national interests.

To this end, let it be known that the highest office in the land is a straitjacket whose occupant is expected to observe the objectives of the liberation struggle.

We will, therefore, not accept, let alone support or salute, anyone with a different agenda that threatens the very existence of our sovereignty, our country and our people. The statement by Zvinavashe demonstrates the conflation between the party and the state and the party and the military.

It set the stage for the military’s overt interventions in the country’s political life.  Retired Lieutenant-Generals Douglas Nyikayaramba (late), Martin Chedondo and Zimbabwe Prison Service commissioner-general, retired Major-General Paradzai Zimondi (also late), among others in many instances towards the June 2008 presidential election run-off, sent similar threats to the electorate and Mugabe’s rivals.

Mugabe also issued a solidarity statement clearly toeing the line drawn by the securocrats in one of his addresses in the same period when he said: The war veterans came to me and said, “President, we can never accept that our country which we won through the barrel of the gun can be taken merely by an “X” made by a ballpoint pen. Zvino ballpoint pen icharwisana ne AK? (Will the pen fight the AK-47 rifle?) Is there going to be a struggle between the two? Do not argue with a gun. Nyikayaramba then emerged like a spokesperson of the Zanu PF military electioneering team.

During the Government of National Unity era, he was chosen to represent military presence in the constitution-making committee and he advocated for a constitutional clause that will ensure that Mugabe is “president for life” and told the nation that: I am in Zanu PF and Zanu PF is in me and you can’t change that… Truly speaking, I am Zanu PF and Zanu PF is in me and you can’t change that … I am sure everyone, including yourself, has now woken up to realise that he (the late founding main opposition MDC leader Morgan Tsvangirai) is not the right candidate …  The bottom line is that I will not surrender; I will not salute someone like that personally… What he (Tsvangirai) is saying is nonsense. We are dealing with a national security threat… When the country was bracing for the watershed 2018 elections, Nyikayaramba, then still serving, in September 2017 in a Zanu PF military politicking crusade, commandeered chiefs assembled at the 4 Brigade in Masvingo to ensure that Mugabe wins the 2018 elections.  He unequivocally stated that: Did anyone ever say to a traditional chief that you are old, leave the chieftainship for me?

That is unheard of. What will happen to the chief’s aides? We need to remind each other. No chief was voted for. No son has ever ordered his father to step down from his role as leader of the family, so the same applies to our case with President Mugabe.

That is what we should remind each other when we meet. Whites want divide-and-rule, and they saw that Mugabe is the nerve centre of the country. Let us not sell the country for the love of sugar. We are here to strengthen the relationship between chiefs, the President and the army. Militarising the electoral environment renders results of polls devoid of being an indicator of the people’s democratic choice, but rather an expression of the people’s choice of life over death.

No matter how independent the Zimbabwe Electoral Commission (Zec) might try to be, if the context of the electoral process is not liberated from military capture, elections will remain neither free nor fair.

Election-based transition that is contrary to military interests is left impossible.  Zec is among the most politicised bodies in Zimbabwe with its administration infiltrated by uniformed agents of the security sector and its political compradors. In 2002, an ex-colonel in the army, Sobusa Gula-Ndebele, was appointed to chair the Electoral Supervisory Commission, while Nyikayaramba, a serving army commander, was chief executive officer.

This military-led team presided over the running of first contested presidential election post-Unity Accord. Gula-Ndebele was later promoted to Attorney-General in 2008 — a move seen as a direct reward for the 2002 flawed election services.

The military will remain the decisive factor in the next elections unless there are reforms, or a tsunami of youth voters — like in Zambia — and an overwhelming wave of discontent against the status quo that can overcome rigging in all its manifestations.