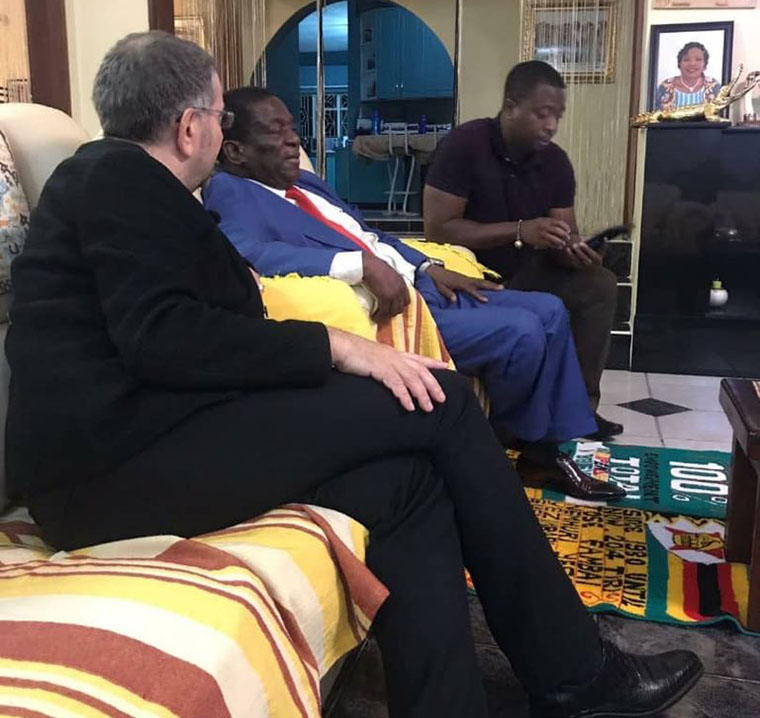 ZIMBABWE’S honorary consul to Belarus and close friend of President Emmerson Mnangagwa, Alexander Zingman, who is set to benefit from a US$62 million murky deal to supply local authorities countrywide with fire engines, has pocketed hundreds of millions of dollars in other opaque ventures.

They include gold mining, as well as supplying the country with buses and agricultural equipment. In the latest deal, Mnangagwa’s Belarusian ally is close to pocketing millions of dollars through supplying fire engines at highly inflated prices to 63 rural district councils, 32 urban local authorities and metropolitan provinces following a directive by the Local Government ministry.

Local Government minister July Moyo faced fresh accusations of circumventing the public tendering system this week by ordering all local authorities to purchase fire engines. The fire engines are marketed by Zingman’s AFRATRADE DMCC and are manufactured by a Belarusian company, LLC Pozhsnab.

Zingman is also an ally of Belarusian strongman Alexander Lukashenko and has a cosy relationship with Mnangagwa. The dodgy businessman, who was detained for 12 days in March last year in the Democratic Republic of the Congo, was named in the Pandora Papers as one of two Belarusians who used shell companies in the Seychelles and the UK to mask their involvement and conflict of interest at the heart of the deal.

An investigations by the Journalism Development Network, Inc., trading as the Organised Crime and Corruption Reporting Project (OCCRP) in partnerships with The NewsHawks, revealed Lukashenko’s front man, Viktor Sheiman, was dispatched to Zimbabwe in March 2018 to negotiate trade and business deals for his government.

Indications are that Sheiman paved the way for a gold mining deal between his son Sergei Sheiman and other Belarusians with offshore accounts, including Zingman.

Investigations by OCCRP revealed that the mining deal was presented as a collaboration between the two countries, and Sheiman said it was intended to make “profit for Belarus”. But in fact, the new joint venture, Zim Goldfields, reports OCCRS, was secretly co-owned by Sheiman’s son, Sergei, with no stake for the Belarusian state.

Sergei Sheiman’s partner in the gold venture was Zingman. OCCRP further reported that Zingman was detained for 12 days this March in the Democratic Republic of the Congo. “A Press release by his Dubai-based company, Aftrade DMCC, specified that the reason for the incident was arms dealing allegations, which Zingman flatly denied. He was released without charge.”

According to OCCRP, documents from the Pandora Papers — a massive leak to the International Consortium of Investigative Journalists of nearly 12 million documents from 14 offshore corporate service providers, shared with media partners around the world — show how the two Belarusians used shell companies in the Seychelles and the UK to mask their involvement and the conflict of interest at the heart of the deal.

“Its ownership was masked by a proxy — UK records name Robert Michael Friedberg as the director of the company — but leaked documents from the Pandora Papers show that Friedberg was acting on behalf of its owners as a nominee for a Seychelles entity with a similar name: Midlands Goldfields Foundation. And that entity was owned by Sergei Sheiman and Zingman, who had both reportedly been part of the March 2018 mission to Harare.

“Both shell companies appear to have been created specifically to take advantage of the opportunity afforded by Viktor Sheiman’s official visit to Zimbabwe: Midlands Goldfields in both the Seychelles and UK were incorporated just a few months before his trip, and Zim Goldfields was set up shortly after.”

The NewsHawks and OCCRP also reported that Sergei Sheiman and Lukashenko’s adminis tration did not respond to questions sent by OCCRP. Aftrade DMCC, Zingman’s Dubai-based company, denied that Zingman had any involvement with the gold venture, despite his name, contact details, passport number and signature appearing in company records for Midlands Goldfields Limited. Alpha Consulting, which set up Midlands Goldfields in the Seychelles, said it complies with all local and international regulations and runs background checks on its clients and the source of their wealth.

“Mr Zingman has no links whatsoever with either Zim Goldfields or Midland Goldfields Limited,” Aftrade DMCC said in a written response. “Mr Zingman is also not involved in any business relationships or existing companies with Mr Sergei Sheiman,” the company added in a separate statement. Sheiman — Lukashenko’s right hand man — has been to Zimbabwe several times.

Shieman and Zingman have been linked to arms dealings, although they deny it. The deals, worth US$350 million, were followed up on later that year in September. This involves agricultural equipment and buses, which seem to be a cover for other money-spinning deals, especially on mining and possibly arms trade. Zingman cut some of his best deals while flying his friends and executives in a luxury jet around the world.

In 2020, Zingman penned an ambitious US$58 million deal with Zimbabwe in what was touted as a bid to revolutionise the agriculture industry. The first batch of modern farm machinery was shipped to Harare, including 20 grain harvesters for wheat and maize, 100 tractors, and 52 seed drills in 2020.

The agricultural deal was signed in 2018, with Belarus providing farming machinery and advanced technology to Zimbabwe, as well as training for local farmers in cultivation, seeding, irrigation, and crop harvesting. It also provided the project with long-term financing for the acquisition of equipment.

Through Zingman, Mnangagwa’s government is importing buses and agricultural and mining equipment from Belarus, but only a few details on the deals have emerged. Zingman is the major link between the opaque multi-million-dollar deals being conducted by Harare and Minsk.

Mnangagwa has pivoted towards Belarus as the Zanu PF government expands its economic ties to Eastern Europe.

This has been particularly galling for most Zimbabwean rights activists, who see the Eastern European country’s human rights record as a red flag. Zingman has been accused of being involved in several arms deals in southern Africa. In March 2021, the 54-year-old Zingman, who travels in a private jet, was arrested by DRC security agents and spent nearly two weeks in detention before his release without charge.

DRC authorities had suspected him and his colleagues of trafficking arms, an accusation he denied.

Related Topics:Alexander Zingman
Up Next