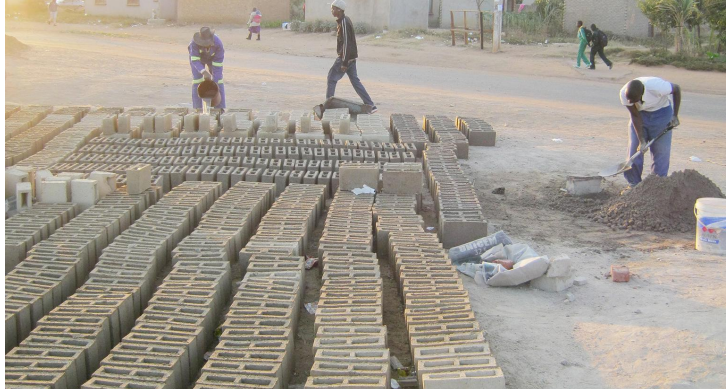 DRENCHED in sweat under the blistering November sun, Gilbert Chamunorwa (45) sits miserably nearby a pile of bricks in St Mary’s, Chitungwiza, about 25 kilometres south of Harare.

Clad in torn blue overalls and a brown hat which has seen better days, Chamunorwa toils daily, moulding bricks for a living. Life dealt him another heavy blow last year when he lost his wife. Looking after two teenage boys has been difficult for Chamunorwa, who feels abandoned by his relatives.

His crestfallen face is testimony to the tough life he has led since losing his job as an artisan at a local firm in 2011. He has never tasted formal employment since then. With unrelenting economic conditions spiralling out of control, the father of two has been struggling to provide for his family.

On a good day, Chamunorwa makes US$40 from selling bricks, but as brick makers flood the market, the returns have been meagre. “Life has been extremely difficult. Taking care of two teenage boys who always want to eat, yet you can afford only a meal per day, is also very difficult,” he told The NewsHawks.

“With the change of the economy, I could not go to work anymore; all hope was lost. I am tired of begging relatives for school fees and rentals; this job does not give me much.”

Introduced to brick-making by his friend two years after he was almost evicted for not paying rentals, Chamunorwa roped his two sons into the trade. Strenuous and often aggravating his back problem, Chamunorwa said brick-making threw him a lifeline.

“I started brick-making with my two sons because it was the only option available. After school, my sons come to help me. It is tough for them because they will be tired and hungry, but that is all we have,” he said.

His partner Mernard Maphosa (34) looks on as Chamunorwa relates his ordeal. Burdened with taking care of a terminally ill mother and four school going siblings, Maphosa wonders when his breakthrough will come.

Toiling daily in an open field, making bricks, which sometimes, may go for a month without being bought, Maphosa rues the day he returned home from South Africa. He had left for South Africa in 2016 in search of greener pastures, but was forced to return home due to his mother’s illness.

“I think I should have just stayed there and contributed from South Africa. Right now both my mother and I are helpless. How does that help?” he lamented.

Employed as a shop attendant in South Africa, where an estimated three million Zimbabweans stay, Maphosa would send his mother medical supplies and food. “The love for my mother drove me out of South Africa. I was leading a decent life. Now I cannot even pay school fees for my siblings, who all look up to me,” he said.

He wishes to return to the neighbouring country, but his passport expired and due to delays at the Registrar General’s Office, it could take another two years before he can leave Zimbabwe. Stuck in this country, Maphosa is battling episodes of depression.

“The thought that as an adult I cannot take care of my family just depresses me. The worst thing is there is no one to help,” he said.

While President Emmerson Mnangagwa insisted that the economy is on a path to recovery during his State Of the Nation Address (SONA) last month, millions of Zimbabweans are living in abject poverty.

Reality on the ground shows that the government has not provided social safety nets to cushion the poor. With urban poverty on the rise and economic prospects bleak, humanitarian agencies say millions of Zimbabweans will need food aid this year, despite the much-touted bumper harvest.

Economic fortunes have worsened during the Covid-19 pandemic which, according to the World Bank, plunged 7.9 million Zimbabweans into extreme poverty. This is almost 50% of the population. Over two million people were expected to go hungry at the peak of the lean season (January-March), the latest report by ZimVac says. In the urban areas 2.4 million faced a gruelling food crisis, a 12% increase from 2019.

While the government aims at achieving zero hunger by 2030, the cost of living in Zimbabwe is rising, as incomes continue to be decimated by inflation. Zimbabwe’s economy remains fragile, with food inflation continuing to increase.

The country’s inflation rose from 51.55% to 54.49% in October, leaving more than five million people on the brink of hunger. In September, the estimated number of people lacking food rose from 5.6 million to 5.7 million. The number of people employing crisis-level coping strategies also increased to 8.53 million people compared to 8.48 million at the end of August 2021, ZIMVac reported.