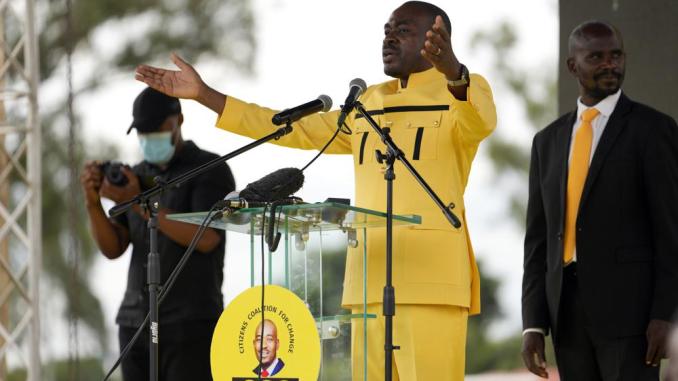 TO sink or swim is the question in this Saturday’s by-elections as the opposition Citizens’ Coalition for Change (CCC) faces a stern test of political strength where there is everything to fight for in a vote largely viewed as a precursor of the watershed 2023 polls.

Twenty-eight seats are up for grabs this weekend and the CCC expected to grab the vacant urban constituencies where the party enjoys considerable support.

This election comes at a time Zimbabwe is witnessing the rebirth of opposition politics, which two months ago had taken a nosedive amid an onslaught by the authorities to create a one-party state.

Although CCC is just two months old, its popularity will be tested in these polls. A win will cement the CCC as the legitimate opposition following months of political  combat with MDC-T leader Douglas Mwonzora who now leads a ship many believe is doomed.

Zanu PF claims to have made major strides to reclaim urban seats which has the party has perennially lost to the opposition since 2000. The by-elections serve to test the party’s strength in urban areas. A win in some urban centres would be considered a massive boost ahead of 2023.

Even losing by small margins will be considered a boost for the ruling party, but the CCC would see landslide victories as testimony of its strength.

Zanu PF is likely to retain most of its rural seats, but the effectiveness of CCC’s rural mobilisation drive will come in for scrutiny.

If the CCC wins some seats previously held by Zanu PF, it will confirm that the party has made inroads in rural areas.

A slimmer winning margin for Zanu PF in rural settings like Gokwe Central, Murehwa South, Chivi South and Mwenezi East would be worrisome ahead of next year’s polls as this entails major inroads for the opposition.

While winning is the major goal of both parties, winning margins will be more crucial. Slimmer wins for the opposition in urban areas will rattle the CCC as it would mean that Zanu PF has made major inroads.

A win for Zanu PF in any of the urban constituencies would come as a shocker, analysts say.

President Emmerson Mnangagwa’s Zanu PF will be looking to win the Kwekwe Central seat which fell vacant following the death of the National Patriotic Front’s Masango Matambanadzo in 2020.

Kwekwe proved a volatile constituency during the campaign period after CCC member Mboneni Ncube was killed while 22 were injured when Zanu PF militants, known as Al-Shabaab descended on the rally.

This election comes amid massive infighting in Zanu PF with Mnangagwa’s allies in the Midlands accused of destabilising the party in his political citadel.

With the CCC expected to retain urban constituencies after a Parliamentary bloodbath between 2020 and 2021 when MDC-T leader Douglas Mwonzora recalled MPs, analysts have expressed concern over the lack of an even playing field.

Political analyst Ibbo Mandaza said a CCC win would be a blow for President Emmerson Mnangagwa and Mwonzora who were accused of plotting the downfall of the opposition.

A CCC win would fire warning shots for a possible showdown with Mnangagwa in 2023.

Mnangagwa will be seeking his second term after taking over the country in a military coup in 2017.

“It is more than just a by-election. It’s a test between the two. The MPs’ recall was obviously illegal. It is a statement of fact on the part of CCC but a statement of failure for Mwonzora and Mnangagwa,” Mandaza said.

He added: “A CCC win would be a warning to Mnangagwa to say his days are numbered.”

Bulawayo-based independent analyst Dumisani Nkomo said the by-elections are a serious test of CCC’s potential to mount a serious challenge to Zanu PF.

“This by-election  is a test of the  potential  of CCC as a brand and its ability to mount a serious  challenge  to Zanu  PF. Whilst CCC may make inroads  into Zanu PF strongholds  it will be difficult  currently  to dislodge the Zanu PF rural vote. A bit more time and strategy beyond  the  by-elections  is needed,” Nkomo said.

“Indeed these elections  are not mere by-elections;  they  are  a dress rehearsal  for the  2023 elections.”

Related Topics:Nelson Chamisa
Up Next