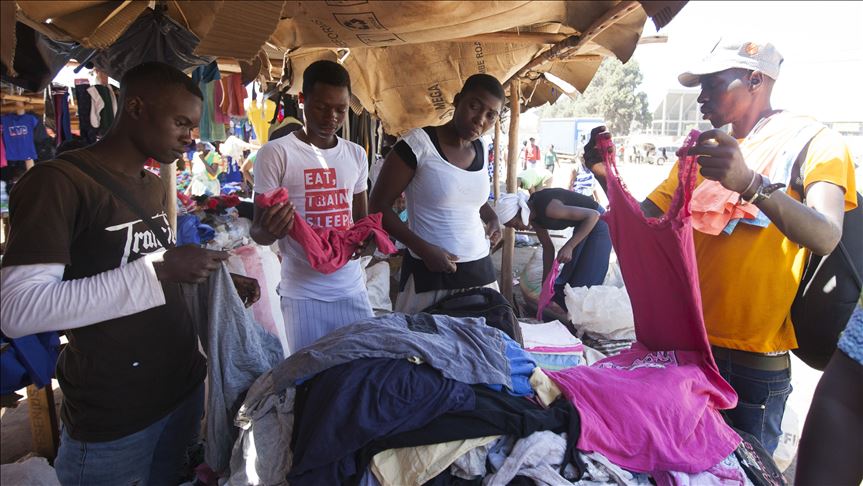 THE manic tone of his voice can be heard yards away from his makeshift vending stall in Mbare, one of Zimbabwe’s oldest townships.

It is 1pm on a Thursday and George Jambo is bellowing at the top of his voice, at pains to attract elusive customers to his stall outside Rufaro Stadium.

A pile of winter clothing, which includes jackets, fleeces, hoodies and coats, completes his merchandise, while a stack of shoes is manned by his friend, also a tout.

He is the loudest here.

Jambo (34) ekes out a living by selling second-hand clothes, a trade he ventured into three years ago.

Winter is Jambo’s favourite season, this is when he makes most of his money.

Desperate to keep warm in the biting cold, customers have been trooping to his stall to buy cheap warm clothing.

“Ndine manyama momz,” loosely translated to “I have quality clothes today” in street lingo, he shouts as a female customer stoops to select a fur jacket.

“This is my hustle. I recently opened another spot at Copacabana, which means it is lucrative. I can feed my family with money from selling second-hand clothes,” Jambo said.

In Zimbabwe, second-hand jackets, sweaters and other winter clothing have saved many at a time when buying new clothes is beyond the reach of the poor majority.

While the affluent have the luxury of buying winter clothing abroad or from departmental stores, locally most Zimbabweans have turned to the streets to keep warm.

A pile of socks by the pavement, with inviting pricing of US$1 for four pairs is tempting for passersby.

“Kotamai boutique” is one of the many phrases used on the streets to describe the sellers of second-hand clothes. Kotamai means stoop.

A look in all directions before stooping to select an item is common also for those who do not want friends to know they are street shopping.

When the coast is clear, they immediately pick the item, pay, and make their way home.

Dry cleaning for the monied or a good wash and the jacket is as good as new.

“I have customers who have opened shops to sell the same bhero that I am selling. This is how hot my stuff is,” Jambo chuckles, adding that he bought a car from the proceeds of selling used clothes.

“Many people have since stopped getting new clothes. They come here,” he added.

On a cold morning in Harare, pedestrians adorning expensive-looking coats fill the streets.

A visitor could be fooled into thinking they walked into a shop to purchase the coat.

“I buy all my coats from a lady who imports these used clothes.

They are as good as new, sometimes they even have tags,” Sharon Mupota (23), who works as a clerk in an accounting firm, said.

Mupota’s plug has a posh shop at Kensington shopping centre.

“Even those who stay in the upmarket suburbs also buy these second-hand clothes. Not many can afford to import new winter clothing, things are expensive,” she said.

For US$20 Mupota can buy a winter coat and a polo neck jersey. Talk about the perfect plug!

Imagine winter without second-hand clothes in Zimbabwe? Most would freeze, including homeless families who can be seen clad in nice sweaters while begging on the streets.

Mhare, who also works for a parastatal, said winter had brought good fortunes as Epworth residents scrambled for his merchandise.

Unlike others who import second-hand clothes from Mozambique and other countries, Mhare sources the clothes from the auction.

“It is cheaper, they sell the stuff to me for a song,” Mhare said.

“I essentially use my Zimdollar salary to buy the merchandise for resale,” he said.

A sweater is sold for US$1 at his vending stall. Socks go for US$1 for five pairs.

“The profit margins are low, but at least I get US dollars than my day job which gives me Zimdollars,” he added.

With inflation now hovering above 130%, Zimbabweans must make a choice between buying food and clothes.

The opportunity cost of food is substituting good clothes with second-hand apparel. Such clothes are cheaper and durable, some argue.

This has not stopped imported clothes from being sold in boutiques and flea markets. However, due to subdued incomes the streets have become a better option for struggling Zimbabweans.

As the economy teeters on the brink, these clothes are viewed as god-sent.

While the ban on second-hand clothing remains, lots of merchandise has found its way into the country through porous borders.

But until Zimbabweans can afford new clothes, second-hand clothes will do for now.

Related Topics:EconomySecond clothes
Up Next