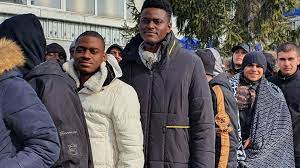 DOZENS of Zimbabwean students remain stuck in countries surrounding Ukraine after they fled a bloody war nearly a week ago, amid concerns that cabinet this week failed to deliberate on the critical matter.

Government ministers met this Tuesday for their weekly meetings to deliberate on various matters affecting the country but conspicuously absent from the brief presented by Information minister Monica Mutsvangwa was the latest on the stranded students.

This, observers said, suggested glitches in what government had touted a success in evacuating hundreds of affected students.

The NewsHawks has it on good authority that the government has failed to provide return tickets for some of the students who remain stuck in different countries including Romania, Hungary and Poland.

This comes as at least 18 Zimbabwean students who were also stuck in Sumy, a town in north-eastern Ukraine near the border with Russia, were rescued this week after nearly a week under siege. Their university came to their rescue.

The Zimbabwean embassy in Germany has facilitated tickets for some of the students while many remain in limbo and are running out of patience but with little to do.

The NewsHawks understands that despite submitting personal details, some students have not received their travel itinerary, nearly a week after fleeing Ukraine which has been ravaged by Russian bombardment.

“Many students are still waiting for their flight tickets and dates for travel. The embassy really did a great job together with the diaspora, but it seems there are still glitches,” a student who sought refuge in Hungary said.

The government last week said it planned to evacuate over 200 students, but scores are still stuck in Europe.

“I have a friend who is yet to come. He submitted his name, but officials keep saying his ticket has not yet been bought. Staying in Europe is expensive without an income, and he is in dire straits. I hope he will get his itinerary soon because he is desperate to come back home. It is better to come back home, re-strategise and see how you move on,” another student who arrived in Zimbabwe this week said.

Contacted for comment, Mutsvangwa said: “I am out of the country. Can you get in touch with Foreign Affairs.”

Zimbabwean students have in recent weeks shared harrowing stories of their escape from war-torn Ukraine.

Chitunhu, who had only two months left to complete his studies, fears he has wasted six years of study.

Now a refugee in Romania, together with thousands from different countries, the sixth-year medical student at a university in Vinnitsia, a small town next to Kiev, said he will not be returning to Zimbabwe for now. He is seeking asylum in Germany.

Chitunhu is among hundreds of Zimbabwean students who spent two days on the road, braving the cold nights, long bus rides and haunting fears that Russian leader Vladimir Putin’s military might close in on them.

Coming back home is not an option for some of the students.

For those who returned home, like medical student Philemon Chizororo, starting life in Zimbabwe will be tough.

“Many things have changed since I left in 2018. There are still some who are still waiting for their tickets and others who just chose to stay. The situation is still tense, but we will go back when everything goes back to normal,” Chizororo said.

Chizororo, who was due to begin his semester on 13 March, said he was devastated but will trudge on with his studies if online lessons open.

“We will see what happens. If not, government has to see what to do.”

Zimbabwean students say the government should allow them to complete their degrees in the country or make an exemption for those affected by the war.

Uncertainty has gripped over 200 students who risk losing years of education in foreign land.

“The reason why some students are acting like they do not want to come back home is that they are not certain about the future. Over 95% of the students are studying medicine. We want to know from the government what is going to happen to us. How are they going to integrate us back into system? Only after that will we be able to make decisions,” a student said.

“I would like to finish my medical degree at the University of Zimbabwe (UZ). We want to know, from government what they are going to do for us. There should be a method of integration.”

“Some students feel it’s better to live in refugee camps close to Ukraine and come back when things are better. But as you know, the first option would be to come back home,” the student added.

Soon after the invasion, Zimbabwean students were asked to register their names, phone numbers and hostel numbers.

From the registers seen by The NewsHawks, most students indicated that they would not want to come back home due to heightened uncertainty over their future.

This week, Hungary extended an invite to African students to complete their studies in that country through a special dispensation triggered by the war.

While this remains a viable option for some students, many say they had run out of funds.

“Hungary is offering students to finish their studies but even if they offer, they want money. No student can pay for fees and start school. All the students are in trauma. Even to seek refuge in Hungary or Germany is not easy. Nothing is predictable,” Chitunhu said.

This week also brought much relief for the Zimbabwean students who were stuck in Sumy.

Sumy, which is about 20 hours’ drive from the Polish border, has been under siege from Russian forces with reports of train stations and bridges being bombed.

Students who have been in contact with The NewsHawks said they are running out of food and water while their security continues to be in jeopardy.

A student, only identified as Kuziva, on Wednesday said he was on a train to the Polish border, along with other students.

“Yes, we have been evacuated by the school. I am in a train now, we are still on the move,” Kuziva said.