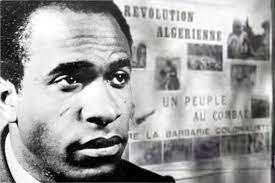 FRANTZ Fanon, the Martinique-born psychiatrist, philosopher, revolutionary and leading pan-Africanist, would have been 97 on 20 July 2022.

He left a remarkable imprint. His views influenced many in the field of mental illness as well as pan-Africanist thinkers and anti-colonialism and black liberation campaigners.

Fanon’s wide-ranging interests can be gleaned from his writings on numerous subjects including politics, psychiatry and even sports. Fanon’s influence and legacy are remarkable.

Fanon highlighted how, by institutionalising patients, psychiatric hospitals tended to further alienate them from their communities. It also became clear to him, while working as a psychiatrist in Algeria between 1953 and 1956, that patient integration was impossible in colonial societies.

Decolonial thinking is often associated with literature from the late 1990s and early 2000s. Yet the scholarship goes back much further, and has no shortage of impressive exponents from the global south. Among these, Fanon enjoys preeminence.

Fanon played soccer from a young age and it became part of his life. As a psychiatrist, he even attempted to use soccer as part of therapeutic interventions for patients. His views on the sport mirror his damning eloquence against colonial and capitalist exploitation.

One of the seminal moments in the anti-colonial struggle and the history of pan-Africanism was the All-African People’s Conference in Ghana in 1958. Ghana was then the only African nation to have achieved independence from colonial rule. When Fanon rose to speak, not many knew who he was. But what he said that day inspired many with its militancy.

Fanon wrote a number of books and articles. The best-known of these is arguably The Wretched of the Earth, published months after his death in 1961. A book published in 2021 to mark the 60th anniversary of the global classic features his most important quotations, which continue to resonate today.

As fate would have it, Franz Fanon and Nelson Mandela, among the best-known proponents of African liberation, were born in the same week in 1918 and 1925, respectively. Mandela’s birthday, which is celebrated globally, falls on 18 July. Fanon’s is two days later, on 20

July. The two great men have one more thing in common: they both admired and were hugely influenced by the Algerian revolution of the 1950s.

Quotes from The Wretched of the Earth

Fanon died on 6 December 1961, just after the publication of his last book, The Wretched of the Earth.

The following is an extract from Nigel C. Gibson’s book, Fanon Today: The Reason and Revolt of the Wretched of the Earth. He discusses some important quotes from Fanon’s global classic.

In the first chapter of The Wretched of the Earth, “On Violence,” Fanon describes colonialism as a system of absolute violence that can only be opposed through violence. He references South Africa as he powerfully describes the colonial world expressed in space:

In contrast, the colonised sector, “the shanty town, the Medina, the reservation…[is] a disreputable place inhabited by disreputable people. You are born anywhere, anyhow. You die anywhere, from anything. It’s a world with no space, people are piled one on top of the other, the shacks squeezed tightly together. The colonised’s sector is a famished sector, hungry for bread, meat, shoes, coal, and light.”

He then adds an important measure of decolonisation, “If we examine closely this system of compartments…its ordering and its geographical layout will allow us to mark out the lines on which a decolonised society will be reorganised.”

Fanon rocked the All-African Peoples Conference in December 1958 when he raised the issue of violence in contrast to Kwame Nkrumah’s non-violent “positive action” agreed upon by many delegates. The following year Fanon became ambassador to Ghana and by then the crucial problem for Fanon was the lack of ideological clarity among leaders, regardless of their position on violence and non-violence.

The rationality of revolt and the philosophy of organisation

The centrality of the “rationality of revolt” to a “new politics” is highlighted by these two quotes, from the end of chapter 2 and the beginning of chapter 3.

“The insurrection proves to itself its rationality and demonstrates its maturity every time it uses a specific case to advance the consciousness of the people in spite of those within the movement who sometimes are inclined to think that any nuance constitutes a danger and threatens popular solidarity.”

If the rationality of revolt becomes the material force of revolution where “violence represents the absolute line of action,” the “new politics is in the hands of…[those] who use their muscles and their brains to lead the struggle for liberation”.

But it is the cowardice and apathy of the “elite” and their “incapacity” to “rationalise popular practice” and “attribute it any reason” that leads to the postcolonial tragedy.

It was not only the leaders who were subject to Fanon’s anger. He was brutally honest in his criticism of the revolutionary militant:

It sometimes happens at meetings that militants use sweeping, dogmatic formulas. The preference for this shortcut, in which spontaneity and over-simple sinking of differences dangerously combine to defeat intellectual elaboration, frequently triumphs.

He calls the militant’s logic shocking and inhuman.

The nationalist bourgeoisie and their organisation

Given that he was writing at a moment when more than half of Africa had recently gained independence, his critique of the nationalist middle class and nationalist parties reads like a script which has been repeated over and over:

Privileges multiply and corruption triumphs…Today the vultures are too numerous and too voracious in proportion to the lean spoils of the national wealth. The party, a true instrument of power in the hands of the bourgeoisie, reinforces the machine, and ensures that the people are hemmed in and immobilised.

At the same time, wary of the rising xenophobia and chauvinism in newly independent West African nations, Fanon argues that national consciousness is not in fact nationalism. Rather, national consciousness “enriched and deepened into humanism…is the only thing that will give us an international dimension.” For him the building of a nation has to be “accompanied by the discovery and encouragement of universalising values.”

Those universal values are expressed in the four-page conclusion to The Wretched of he Earth:

“So, comrades, how is it that we do not understand that we have better things to do than follow Europe?”

Fully cognisant of the fact that neocolonialism can wear a Black or Arab face, Fanon is critical of how newly independent African countries, even when they used the language of socialism, didn’t do much more than follow Europe’s model, looking to take over the colonial apparatus – its states and institutions – for their own interests. Fanon considered this a product of the crisis of thought, the lack of a philosophy of liberation.

“That same Europe, where they were never done talking with humanity, never stopped proclaiming that they were only anxious for the welfare of humanity. Today we know with what sufferings humanity has paid for every one of their triumphs of the mind.”

Fully cognisant of the fact that neocolonialism can wear a Black or Arab face, Fanon is critical of how newly independent African countries, even when they used the language of socialism, didn’t do much more than follow Europe’s model, looking to take over the colonial apparatus – its states and institutions – for their own interests. Fanon considered this a product of the crisis of thought, the lack of a philosophy of liberation.

“That same Europe, where they were never done talking with humanity, never stopped proclaiming that they were only anxious for the welfare of humanity. Today we know with what sufferings humanity has paid for every one of their triumphs of the mind.”

Fanon rejects the humanism proclaimed in Europe. Based on colonisation, exploitation, slavery and violence, European humanism dehumanises. And so “We must find something different”. He rejects what is central to European humanism, profit and the reduction of the human to outputs in production.

“If conditions of work are not modified,” he adds, “centuries will be needed to humanise this world which has been forced down to animal level by imperial powers”. He’s saying, humanising the world means rethinking everything, “work[ing]out new concepts… and setting afoot a new humanity”.

Time as the space for human development

“The sense of time must no longer be that of the moment or the next harvest, but rather that of the rest of the world.”

Humanising the world means creating a new conception of time, the time to create a new society.

“We have realised that the masses are equal to the problems which confront them…experience proves that the important thing is not that three hundred people form a plan and decide upon carrying it out, but that the whole people plan and decide even if it takes them twice or three times as long. The fact is that the time taken up by explaining, the time ‘lost’ in treating the worker as a human being, will be caught up in the execution of the plan.”

Rather than top-down the plan should come from “the muscles and the brains of the citizens” because “people must know where they are going, and why”. In the early pages of The Wretched of the Earth Fanon speaks of those dehumanised beings who become historical protagonists through the struggle.

This is just the beginning, the work of humanising the world does not end there, in fact by the end of the book it is clear that while this remains a crucial turning point because consciousness, let alone material reality, are not changed overnight. Mental and physical liberation has to be ongoing after the colonists had been kicked out. The “new society”, the liberated “new person” – collectively, socially, and individually – has to be consciously and intentionally developed.–The Conversation.

Related Topics:Franz Fanon
Up Next

Mass shootings in South Africa are often over group turf