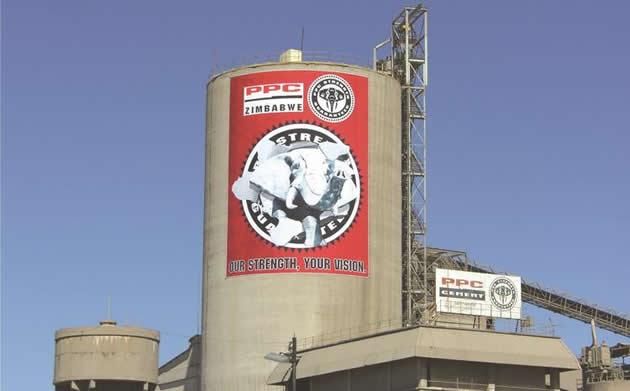 REGIONAL cement maker PPC says revenue at its Zimbabwean unit grew by 60% to R797 million for the six months ended 30 September 2020, despite a challenging economic environment and the impact of Covid-19-related lockdown restrictions.

DUMISANI NYONI
PPC operates a clinker plant at Colleen Bawn in Gwanda in the southern part of the country, as well as a cement milling plant outside Bulawayo and a third factory in Harare.
Apart from South Africa and Zimbabwe, PPC also has units in Botswana, Ethiopia, Democratic Republic of Congo and Rwanda.
“Although trading conditions in Zimbabwe were characterised by a challenging economic environment and the impact of Covid-19 related lockdown restrictions, domestic cement volumes grew by 5% – 10%, supported by ongoing infrastructure projects,” PPC said in its financial statement.
PPC Zimbabwe cement sales grew in the similar range, supported by an increase in volumes of 35% to 40% in the second quarter.
“The positive sales momentum has continued into October and November, albeit at a normalised rate,” it said.
In the period under review, cement pricing was adjusted to account for the increase in inflation and the devaluation of the local currency. As such, realised selling prices in US dollars increased by 23%.
Earnings before interest, taxes, depreciation and amortisation (Ebitda) improved by 62% to R326 million and Ebitda margins improved to 40.9%, compared to 40.4% in September 2019.
The group said its unit continues to meet its debt obligations in-country while remaining financially self-sufficient, and recently declared a dividend to its shareholders of US$6.6 million, of which PPC is entitled to US$4.7 million.
PPC received US$4.4 million after withholding tax. Despite the initial COVID-19 related trading restrictions, group revenue increased by 1% to R5 006 million due to robust cement sales post the easing of COVID-19 restrictions across the jurisdictions in which the group operates.
The cost of sales declined by 4% to R3 895 million compared with the previous year due to cost savings, a dip in volumes and a reduction in depreciation and amortisation.
Administration and other operating expenditure declined by 10% to R492 million, driven by the successful efforts to improve cost competitiveness.
Group Ebitda increased by 15% to R996 million with an Ebitda margin of 19.9% while operating profits increased by 77% to R610 million.
Fair value adjustments and foreign exchange movements resulted in a loss of R366 million, mostly as a result of the revaluation of foreign-denominated inter-company loan accounts.
PPC said the fair value gain on the Zimbabwe financial asset of R139 million consists of intrinsic value gain of R202 million and credit risk fair value loss of R63 million. Zimbabwe blocked funds resulted in a fair value loss of R10 million, it said.
The application of International Accounting Standard 29 (Financial Reporting in Hyperinflationary Economies) resulted in a net monetary gain amounting to R326 million.
Finance costs increased by 5% to R330 million due to currency movements on foreign currency- denominated debt.
Taxation decreased to R109 million relative to R195 million, restated in September 2019.
“After taking into account the above fair value adjustments and hyperinflation, earnings and headline earnings attributable to shareholders of PPC Ltd declined by 37% to R287 million,” it said.
Net cash inflow from operating activities amounted to R769 million while cash generation benefitted from improvements in Ebitda and a reduction in working capital absorption to R21 million.
Cash generation and preservation remain a key priority for the group, PPC said.
Capital investments in property, plant and   equipment   decreased   by   26%   to   R166 million.
In the period under review, gross debt amounted to R5 218 million.
In the outlook, PPC said although it is experiencing positive sales momentum across most of its markets, it remains cautious on the outlook for the rest of full-year 20,21 given the ongoing health crisis and its resultant impact on economic activity.
“PPC will remain focused on cash preservation and improving cost competitiveness by lowering operational costs,” it said.

Securities players should invest in ICT