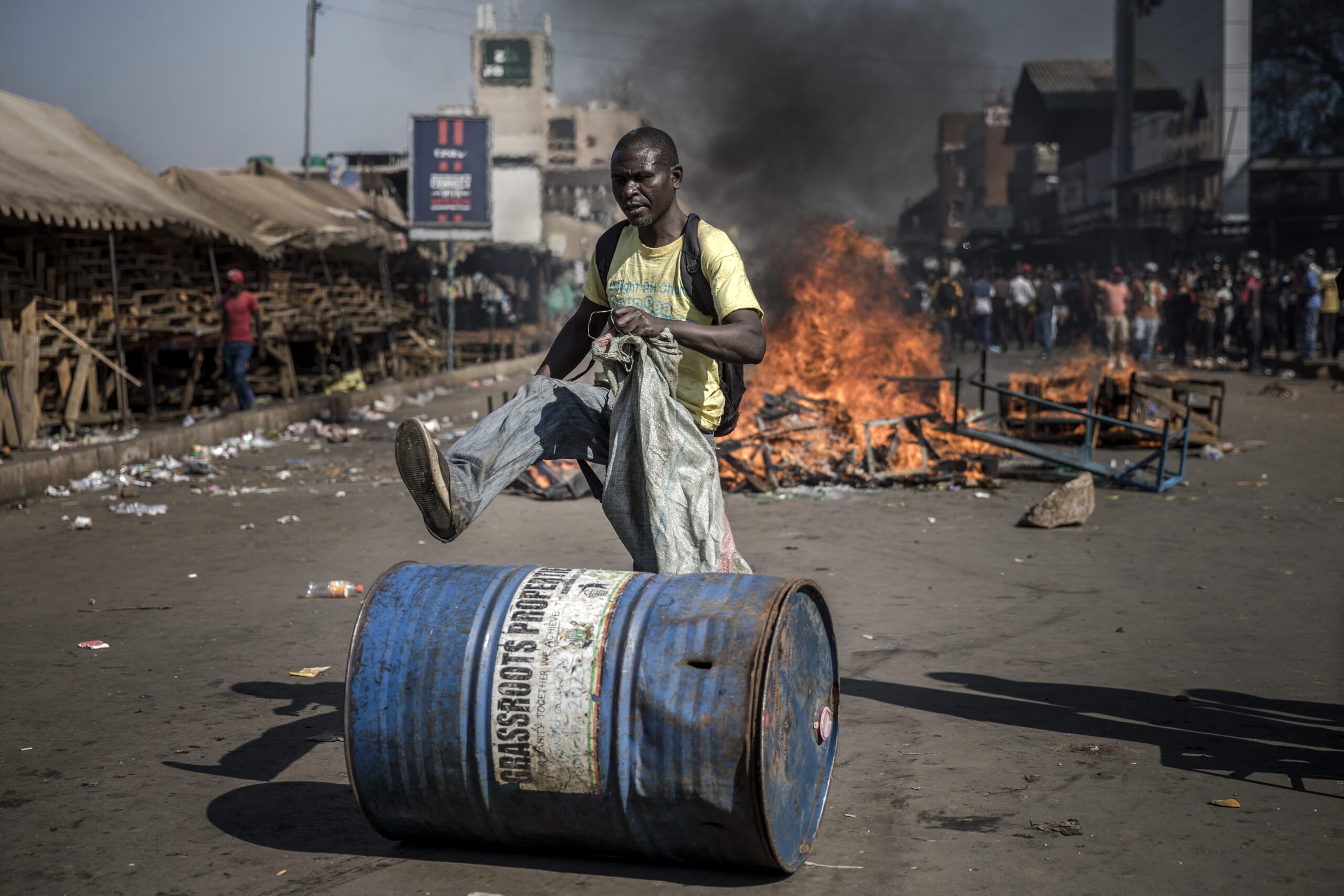 TOPSHOT - A supporter of Zimbabwean opposition MDC Alliance push a barrel in front of a fire in Harare on August 1, 2018, as protests erupted over alleged fraud in the country's election. - Protests in Zimbabwe's historic elections turned bloody on August 1 as a man was shot dead during demonstrations over alleged vote fraud and the president appealed for calm. The man died after soldiers fired live ammunition during opposition protests in downtown Harare, AFP reporters saw. (Photo by Luis TATO / AFP) (Photo credit should read LUIS TATO/AFP/Getty Images)

A PEACE advocacy organisation, the Zimbabwe Peace Project (ZPP), has reported an increase in politically motivated human rights violations and violence across the country, mainly perpetrated by Zanu PF, as political parties gear for the 2023 elections.

While the ruling party has blocked political activities, with the police arresting opposition officials and activists for purportedly breaching Covid-19 lockdown regulations, Zanu PF has continued with its activities and functions.

According to the ZPP, 176 cases of human rights violations were reported in February while 188 cases were reported in July, with most cases relating to citizens being forced to buy Zanu PF membership cards. Zanu PF has embarked on a restructuring exercise at grassroots level ahead of the 2023 polls, which has seen some people being forced into joining the party.

“The Zanu PF card has long since been associated with privilege as those who buy it are protected from harassment and access benefits such as food and other aid. For the sake of peace, those targeted have acquired the cards,” the July monthly report released on 11 August.

“Zanu PF dominated political activity in eight of the 10 provinces and the party, which is on a mass mobilisation exercise, was responsible for coercing citizens to be part of its low-level structures across the country.”

The organisation said there is a systematic infusion of a culture of fear such that, come 2023, many people will not be able to openly express themselves politically.

Zimbabwe’s past elections have been marred by violations, which have affected the credibility and fairness of the polls. Among the issues that have been under the spotlight in the past are issues of breach of electoral laws through vote buying, voter intimidation and violence.

The report states that observations by the ZPP show that the party is using its access to the food aid distribution chain to coerce citizens into joining the party or else be excluded from receiving aid.

“The party has openly announced that it is creating a register of party supporters. The party is also going door-to-door collecting information such as mobile phone numbers, ID numbers and election registration numbers,” the report reads.

“We have all your details so if you vote otherwise, we will find out’, that is a phrase that has been used in previous elections and with where things are going, we are back to that again.”
The organisation also reported the use of traditional leaders to threaten villagers by

Zanu PF, particularly in Matabeleland North and Mashonaland East. The ZPP said this situation would lead to traditional leaders and local Zanu PF leaders having a list of all the people in villages and then “escorting” voters to polling stations under the strict instruction that everyone must vote for Zanu PF.

“ZPP therefore urges that these findings act as a clear early warning mechanism that it goes beyond collection of citizens’ personal details, threats or discrimination during food aid processes. We urge for collective civil society action to advocate for a peaceful and level playing political field within a culture of human rights,” the organisation said.

“We also call on political parties to have internal codes of conduct to deal with politically motivated violence. To the police, your work is cut out for you, and that is to impartially deal with any criminal conduct that happens during political campaigns.”

Some of the cases noted in the report were in the political violence hotbed, Mashonaland Central, where people claiming to be Zanu PF representatives are the parcelling out land.

“A group of people identifying themselves as the war veterans of Zanu PF are operating in Mazowe North making announcements to the effect that there is land in Mutorashanga for allocation to party supporters. They are allegedly asking potential beneficiaries to declare allegiance to Zanu PF, pay US$20 and boom, one gets 15 hectares of land,” the report reads.

In Mashonaland East, the organisation recorded incidents in which Zanu PF officials have been threating to “violently wipe out all MDC Alliance activists before the 2023 elections”.

The peace advocacy organisation noted that the jostling for power within Zanu PF, MDC Alliance, MDC-T, Zapu and Mthwakazi Republic Party was stoking inter-party and intra-party violence, particularly in Bulawayo.