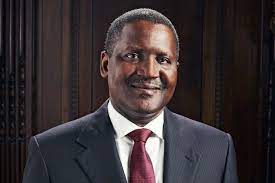 “People are begging us to sell,” Dangote told CNN.

Sitting on 500 hectares (1 235 acres) of land on the outskirts of Lagos, the US$2.5 billion fertilizer plant has an initial annual production capacity of 3 million metric tonnes of urea fertilizer, according to information on the Dangote Group’s website.

The Nigeria plant’s opening comes amid disruptions in fertilizer supplies due to sanctions against Russia. Dangote said demand is robust, with customers “begging” for supplies.

The opening of the Dangote Fertiliser Plant comes amid a supply crunch in crop fertilizers due to sanctions against Russia, which accounted for almost one-fifth of 2021 fertilizer exports, according to Trade Data Monitor and Bloomberg’s Green Markets. Russia is also a top exporter in key fertilizer ingredients such as urea, ammonia, and potash, per trade outlet Argus Media.

“We are lucky to have this plant,” Dangote told CNN. “It is coming at the right time with the Ukraine-Russia conflict as both Ukraine and Russia control substantial amounts of agricultural inputs.”

Dangote’s fertilizer plant is already shipping to the US, Brazil, and India, CNN reported, citing the billionaire.

Dangote, 64, is the 80th-richest person in the world with a net worth of US$20 billion, according to the Bloomberg Billionaires Index. The Dangote Group, which he founded, is the second-largest employer in Nigeria after the government, the country’s Vanguard News outlet reported recently, citing the Nigerian president.

Amid the war in Ukraine, resource-rich African economies are tipped to benefit from sweeping sanctions against Russia, the world’s third-largest oil producer.

“As the European Union and the United States impose sanctions to deny Russia access to European oil and gas markets, oil-producing African countries could seize on the opportunity,” wrote Mvemba Phezo Dizolele, director of the Africa Programme at the Centre for Strategic and International Studies, in a recent note. Oil companies may also expand prospecting operations on the continent, he added.–Business Insider Africa

From message to violence: what to watch for in the media ahead of Kenya’s elections