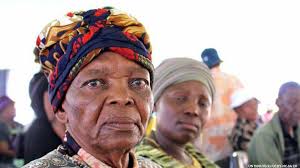 MIRIAM Moyo (75) leans on a window sill, trying to rest her frail body as she impatiently awaits her turn to withdraw a pension payout at the National Social Authority (Nssa) headquarters in Harare.

Moyo has spent five hours queuing for her meagre payout and, due to the Covid-19 pandemic, the process takes long as officials insist on social distancing. The elderly widow gets ZW$800 per month, her husband’s pension.

It is barely enough to cater for the basics, making it difficult to fend for her orphaned grandchildren, but Moyo must make do with the little she has.

With eight mouths to feed, Moyo has been leading a desperate life since her two children died in 2009 and 2010 respectively.

“The life that l am leading is very hard. I live with eight orphaned grandchildren, and they have stopped going to school since there is no money for school fees,” Moyo told The NewsHawks.

“l get ZW$800 per month, which is not enough to cover my basic expenses. There is no food at home and life has been worse after losing my two children who succumbed to HIV and Aids and there is no one to support me. l survive on my husband’s pension,” Moyo added.

Moyo, who ishypertensive,  said the monthly payout is not enough to buy medication. Prices of drugs have soared due to inflation, and chronic patients have borne the brunt of the price hikes.

Pensioners have bemoaned the failure by companies to remit contributions to Nssa, thereby disadvantaging beneficiaries. Also in the long, winding queue is Vimbai Manyise (38), who travelled from Renco Mine in Masvingo to renew her account.

“It’s really so hard that I have to travel from Masvingo just to renew an account. I used US$15 just to renew my account and yet I receive ZW$800, which is about US$5. I have five children, three of them need school fees,” Manyise said.

Manyise, also a widow, now survives on selling second-hand clothes as her late husband’s pension is not enough to cater for her big family.

“I am doing a small business on the side selling second-hand clothes and plastic plates, this is the only thing that has been keeping me afloat,” Manyise said.

Spiwe Zimunya  who was forced to relocate to Mazowe due to unrelenting economic hardships, says ZW$800 is an insult to retired civil servants.

“I am looking after six children. My husband served in the government as a soldier and the pension we are receiving is ZW$800, just a drop in the ocean. Our needs are too much. My children are no longer going to school because l cannot afford their fees. Due to economic hardships, we were forced to relocate to rural areas because we were no longer affording rent,” Zimunya said.

Bernard Ngorima (80), a war veteran, said pensioners spend more money on transport to Harare than they get from the pension.

“Sometimes the money does not come in full, which worsens the already bad situation. With the little money that we are receiving per month, it’s now difficult to buy basic commodities as the prices are increasing,” Ngorima said.

Pensioners say accessing their monthly payouts has become a challenge and called upon the government to review the pension in line with the cost of living.

“Life is tougher for us pensioners. The government is treating us unfairly, particularly those who were once civil servants who served the nation wholeheartedly,” former policeman Paradzai Masakara lamented.

Pensioners are not spared the unrelenting economic challenges, plunging them into untold poverty.

Workers are required by law to contribute 7% of their monthly earnings to Nssa. The pension industry compliance ratio was 7.6% as at 30 March 2020, according to official data obtained from the Insurance and Pensions Commission (Ipec).

Public Service, Labour and Social Welfare minister Paul Mavima this month revealed that pensioners’ payouts would be reviewed upwards to US$60 per month by December this year from the current US$25.

However, the money will be converted to Zimbabwean dollars at the prevailing official Reserve Bank of Zimbabwe rate, implying they will get ZW$5 440 if the rate remains stable at ZW$85 to the US unit.

The payout is enough to cover only a fraction of the monthly food basket, which this month stands at more than ZW$28 000, according to the national statistical body, ZimStat.

The development comes at a time the government has passed Statutory  Instrument 127 of 2021, which triggered a dramatic increase in prices.