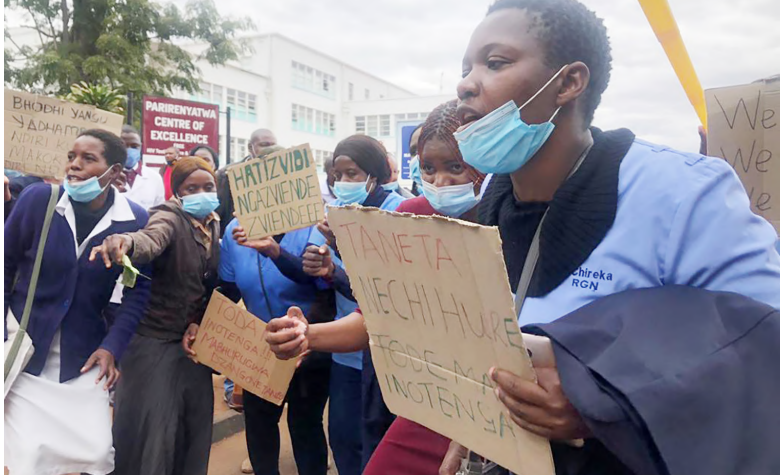 A PLAN by the government to criminalise industrial action by health professionals, among other proposed changes, will trigger massive skills flight of medical staff, a parliamentary watchdog has warned.

Official statistics show that last year 2 000 nurses fled the country for greener pastures as the economy continues to wobble.

The authorities have already pressed the panic button and are now making frantic efforts to stop the skills flight.

The United Kingdom, Australia and New Zealand have over the years been some of the preferred destinations for health professionals such as doctors and nurses.

Veritas, a local watchdog and think-tank on parliamentary business, said proposed changes to a law governing the health profession will have an adverse effect on the southern African country.

Zimbabwe is battling a fourth wave of Covid-19 infections and deaths and experts say the pandemic has already strained the country’s weakened health delivery system.

Health professionals in the private sector do not fall under the public health service, and the Act does not apply to them.

“The Bill is unlikely to cow government health professionals into accepting their unsatisfactory conditions of service and refraining from strike action,” Veritas says.

“Instead it may persuade them that the government is not prepared to listen to their complaints and intends to resort to coercion. The Bill may therefore drive more of them to seek their fortunes outside the country. Altogether this is not a satisfactory Bill.”

Clause 5 of the Bill will insert a new section into the Act to restrict the right of members of the Health Service to engage in collective job action — which essentially means going on strike.

All members of the governing bodies of unions that incite or organise collective job action in breach of the new section will be guilty of an offence and liable to a fine of level 10 (currently Z$70 000) or three years’ imprisonment or both.

The Health Service Amendment Bill was published in the Government Gazette on 23 July last year.

It has been presented in the National Assembly and is currently being considered by the Parliamentary Legal Committee.

Last month, Constantino Chiwenga, the country’s Health minister and Vice-President, announced that the government is in talks with the United Nations and other multilateral agencies to help compensate Harare for training costs for health professionals who left the country for better employment prospects abroad.