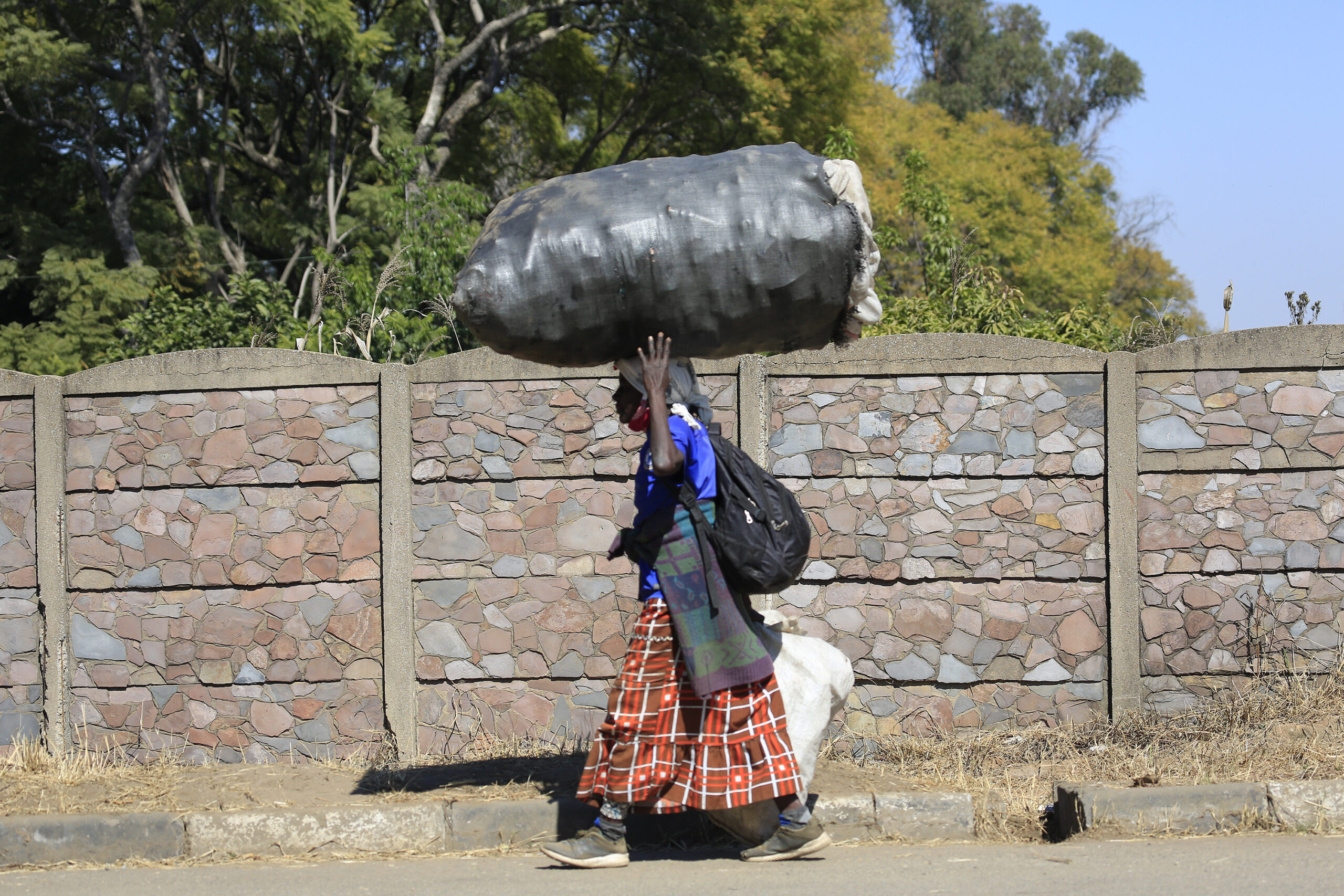 A woman carries sacks laden with used plastics that she will sell for recycling purposes for a living in Harare,Zimbabwe,28 June 2021.

AFTER a long day of toiling around Harare’s Budiriro suburb with a 90-kilograme sack picking up plastic bottles and paper for recycling, Agness Kapfupi (37) finally gets home at 3pm with her two minor children aged 11 and eight.

There is no rest for the trio.

As soon as she drops her sack, she gets busy with household chores while the children set up a stall for the family’s vending business.

“To others it is just mere waste, but to me l see money from it,” Kapfupi said, referring to the garbage she had just collected.

“When l picked the garbage for the first time last year, l noticed it’s not bad. l managed to raise money to enable me to start a vegetable and fruit selling venture to sustain the family. My children are also used to the trade and sometimes go around picking up plastic containers when l can’t make it.”

Kapfupi is among many people who have ventured into the waste management business at a time economic hardships have been worsened by the Covid-19-induced lockdowns.

She says the business helps her fend for the family. It also enables her to play a role in fighting environmental pollution, after being motivated to be productive in a women’s WhatsApp group.

“With this business, l am guaranteed of profits so it’s a business different from selling tomatoes as they can get rotten before l sell them and experience loss. I don’t need any capital,” she said.

Kapfupi sells the plastic bottles to a middleman who sells plastic containers to recycling companies in bulk.
“They charge 30 US cents per kg, meaning a 90kg sack full of these plastics will weigh 10kgs which will make me have US$3,” she says.

It may not be much money to many Zimbabweans, but Kapfupi is content. Besides, finding the plastics is relatively easy, she says.

“On weekends, l go to Chivero Dam because l know its a place where people meet for different occasions such as parties, weddings and anniversaries so after they are done with PET (polyethylene terephthalate) bottles l pick them,” she says.

Kapfupi is not the only one making a living out of discarded plastic. Blessed Kadzimu (41) has managed to raise his five children from it.

In his worksuit and gumboots, he moves from one rubbish bin to another and from one surburb to another. Kadzimu said he ventured into the business way before many people deemed it worthwhile.

“l can say l have been doing this for the past 12 years and l am in the process of building my own house in Ruwa because of this job. It’s a job that many look down on, but that is what is putting food on my table,” Kadzimu says.
“If you work hard, you get paid well and it’s not on a monthly basis, but when l deliver the plastics l get paid instantly.”

The father-of-five makes sure that by 8am every day he would have arrived in Harare’s central business district so that he has much time to move around the city centre, picking uo plastic, bond paper and cardboard.

He said there are types of plastic which are more lucrative than others, hence the importance of knowing the value of various materials.

“Plastic bottles of Cascade and Pfuko Maheu which are classified as high-density polyethylene (HDPE) are a bit profitable and a lot of people go for that, which makes it difficult to find them,” he said.

Despite people like Kapfupi and Kadzimu making a living out of collecting and selling plastic, they are also playing a critical role in curbing environmental pollution, more so at a time the City of Harare is struggling to collect refuse.

Plastic collectors have gone a long way in restoring cleanliness in towns and cities.

Generally, pollution caused by plastic bottles, paper and bags on the environment has become one of the most pressing environmental issues worldwide.

Plastic pollution is mostly visible in underdeveloped  countries because of improper refuse disposal.

Plastic is slow to degrade because of the chemicals used in manufacturing it and it affects oceans, land and waterways. When burnt, plastic releases a toxic substance into the air which causes air pollution.

The Environmental Management Agency (Ema) acknowledges the role played by plastic collectors and recycling companies in preserving the environment. The agency told The NewsHawks it is looking at ways of enhancing their work.

“At the moment we are in the process of working with community groups to establish what are called waste transfer stations or centres where, rather than them moving around picking waste, we want to establish these stations so that people will separate at homes the plastic, paper and bio-degradable waste, which will be taken to recycling companies. Willing community members will get an incentive for that,” Mugadza said.

“All in pursuit of recycling, people are realising that some of the products disposed as waste still have some value.”
Besides plastic, metals including aluminium are also being picked for recycling.

“We do have a multi-channel approach to raw material collection. We receive raw material (waste bottles) from pretty much everybody. We receive the material from individual pickers, cooperatives, community-based groups, social enterprises/entrepreneurs as well as directly from packaging and bottling companies.”

Masuka, who founded PETRECO in 2011 with the motivation to address an environmental concern as flagged by Ema, said his business has been affected by the lockdown.

“We were affected by the lockdown as we depend heavily on the informal sector for raw material feedstock. So, access to raw material was a big issue but also access to the end market was a problem due to restrictions on movement of people and goods across borders. The reduced economic activity also meant reduced raw material inflows and that hurt our business because we are volume driven. Further, the Covid-19 situation added another layer of cost to the business through sanitisation and fumigation of premises, special transport arrangements for employees, PPE (personal protective equipment) and general Covid-19 compliance costs.”

PETRECO recycles a number of products, which has lessoned the costs of producing new material as what is produced remains in circulation.

“We produce flakes, which are an intermediate product for plenty of downstream products like duvets, pillows, polyester yarn for fabrics, shirts , bedding, automotive components, geotextiles (construction-related products), the list is endless,” he said.

Oleans Waste Management Services, one of the companies that work with people who pick up recyclables, also helps households, churches, schools, shopping centres and businesses manage their waste.

Odilo Linzi, the owner of the firm, said they encourage segregation of waste at source point through an integrated waste management system.

“Waste management is capital intensive but highly rewarding. We buy some of the stuff from those who move around picking through paying per kilogramme and send to recyclers and middlemen who transport to South Africa,” he said.

But by far the biggest beneficiary of the recycling work is the environment, which contributes to healthy living.

Related Topics:Waste management
Up Next

The Zimbabwean state is captured