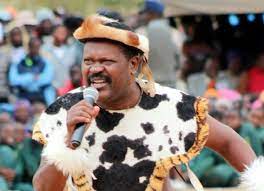 A CARICATURE of Cecil John Rhodes, after he announced plans for a telegraph line and railway from Cape Town to Cairo, also referred to as The Rhodes Colossus, was quite popular in history lessons at school.

It was an ambitious plan.

In the picture, Rhodes is seen straddling Africa from South Africa’s Cape Town to Cairo in Egypt.

While this was a noble plan, the Cape to Cairo Railway was an unfinished project to create a railway line crossing Africa from south to north.

It would have been the largest and most important railway on the continent. It was planned as a link between Cape Town in South Africa and Port Said in Egypt.

The project was never completed. Important parts which were completed have been inoperative for many years, due to wars and lack of maintenance by the former colonies.

This plan was initiated at the end of the 19th century, during the time of Western colonial rule, largely under the vision of Cecil Rhodes, in the attempt to connect adjacent African possessions of the British empire through a continuous line from South Africa to Egypt.

And just like Rhodes in his failed attempt to go from Cape all the way to Cairo, yesteryear music promoter Moses Takawira suffered the same fate.

Takawira, founder of the Cape To Cairo Music Festival, had the same ambition of taking Zimbabwean music beyond our borders to the African continent.

So popular was the music festival that it ran for three straight years before it hit a snag.
However, as fate would have it, one of his live shows, in 2003, flopped and he suffered huge losses.

According to reports, there was chaos after musicians staged a demonstration against Takawira, accusing him of not paying them.

And Takawira’s career as a music promoter ended almost overnight and he was forced to relocate to Chimoio in Mozambique where he is now based.

“Yes, it was my worst moment. It came soon after staging 2001 Music Festival which was my second show at Gwanzura Stadium. The show started at 10am on Saturday and ended at 10am the following morning.

“It happened that some of music bands went to the Press and reported me that I had run away without paying their performance fees.

“Then on Tuesday morning I sent my son to the shops to buy a newspaper and I was astonished to read in The Herald that I didn’t pay some musicians.

“The article was written by Rex Mphisa. I then called him and he invited me to his office but then when I got there I also asked him to invite all the musicians who complained that I had not paid them.

“Much to my surprise on the day I went to The Herald, only a few musicians showed up and the rest didn’t turn up.

“We later discovered that the musicians had no contract forms except Gringo whom I had not given his money because he was stoned that weekend. So I paid Gringo his money while Rex and some officials from the National Arts Council of Zimbabwe watched,” he explained.
Following that incident, not only did Takawira quit being a music promoter but he has since joined Johanne Masowe YeChishanu sect as a senior prophet.

“I am now a member of the Apostolic sect here and it’s been hectic because many people come home to consult seeking divine intervention. I am continuously travelling as a senior member of the church,” he said.

But while Takawira is now following his calling, many people back home thought he was dead after the huge loss which forced him to relocate to Mozambique.

“Some colleagues and musicians think I’m dead. I am alive and well, it’s just that I’m now born again. The reports that I am dead filtered sometime back when Chipawo group manager Norman Takawira passed away; many Zimbabweans thought it was me,” he said.

Takawira says he quit music promotion because it became unviable as a business due to runaway inflation.

“I started out as an assistant project coordinator with Clive Malunga in 1998 when we organised the Jenaguru Music Festival. I then stopped working with Clive to start Cape to Cairo Music Festival which ran from 2000 to 2003 before the business was affected by hyperinflation.

“By the time we had the festival the budget would have been eroded by inflation so it was difficult to keep up.

“In 2002, I coordinated a two-day concert in Bulawayo. One at Windermere Hotel along Victoria Falls highway and another one at White City Stadium. I brought The Soul Brothers from South Africa, both shows were sold out and I was very proud of myself, because the sponsors, the musicians and the fans were happy.

“I remember some of the musicians who participated were Albert Nyathi (pictured), Progress Chipfumo, Diamond Música and Ruth Mapfumo.”

Takawira acknowledged that music promotion was not a business for the faint-hearted as it was akin to gambling.

“I am humble and I’m someone who accepts that anything is possible in life. Sometimes you win and sometimes you lose. It is just what it is. And the worst part was that at home my wife could not understand it so easily. Leaving home going out was not easy, I ended up going around Zimbabwe with my wife.

“The other challenge was being called names. Musicians generally do not trust music promoters and the media is always keeping an eye on you. It is like you are being hounded,” he said.

Takawira is now settled in Mozambique with his wife Amarah and their three children.

Zim hip-hop has a lot to achieve